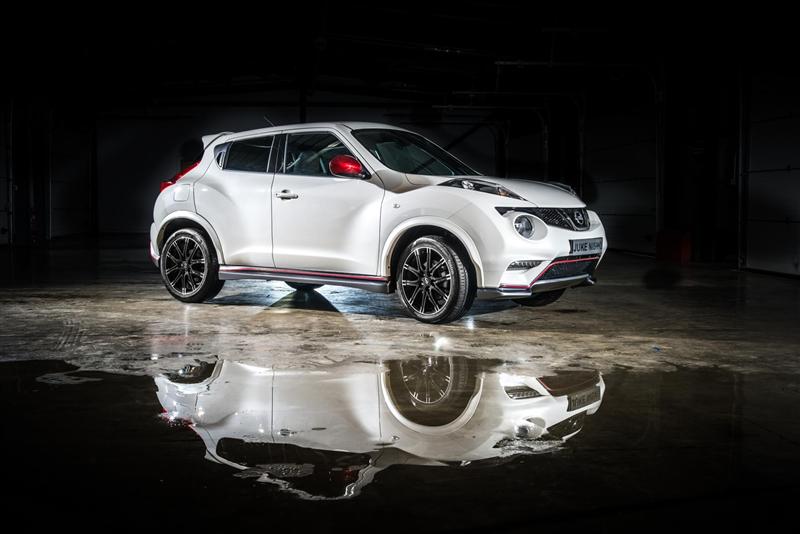 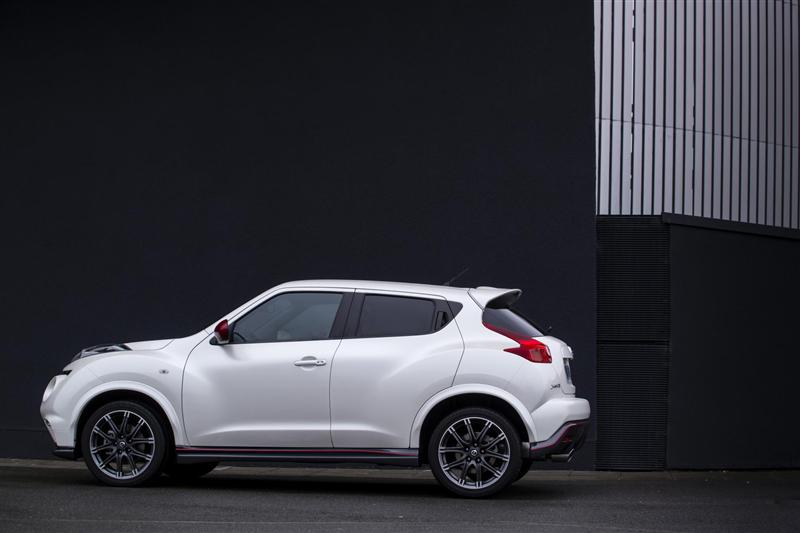 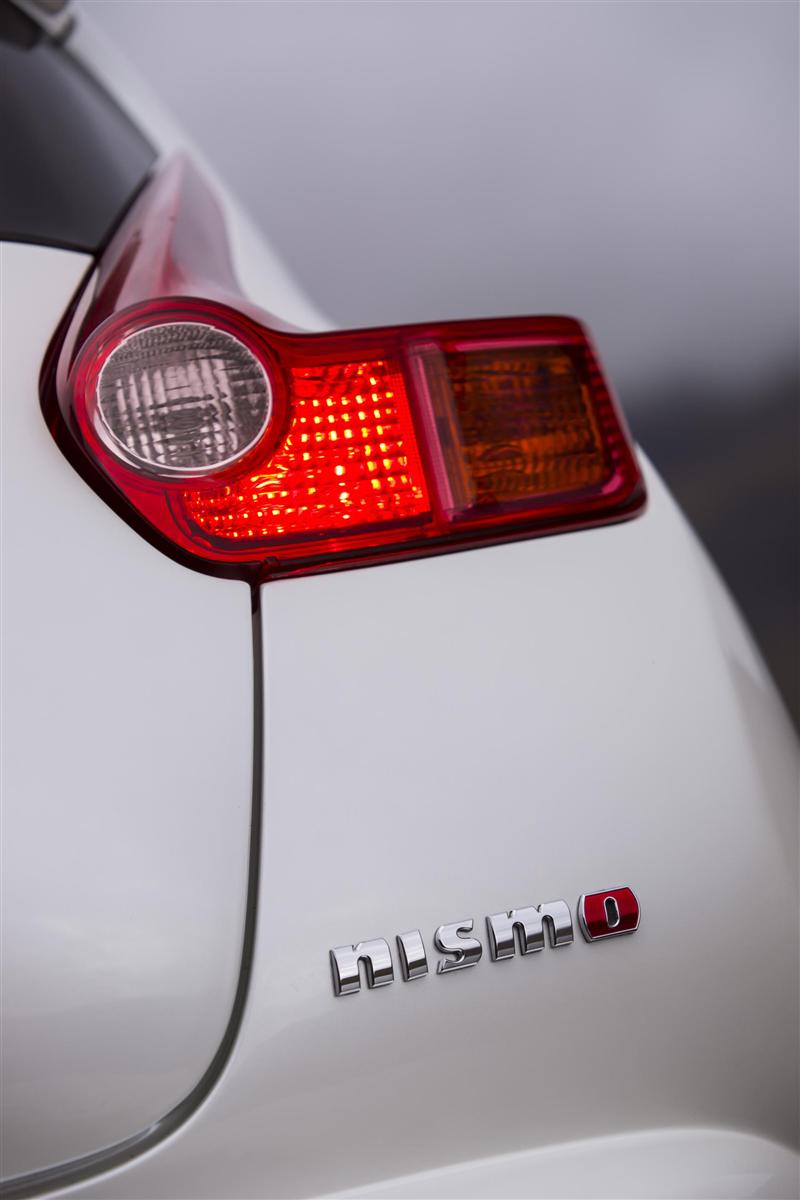 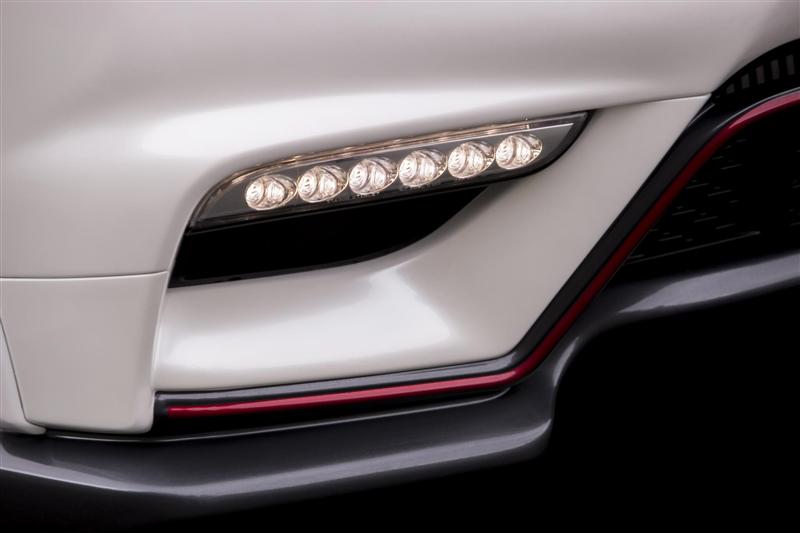 NISMO, its vision and name derived from NISsan MOtorsports, is embarking on an aggressive journey to expand its presence beyond the racetrack in key markets around the world. Already a legendary brand among professional and grassroots racers, as well as performance enthusiasts everywhere, NISMO now is applying its near-50 years of engineering experience and expertise to an expanding range of affordable production vehicles such as the new 2013 JÚKE NISMO model.

Vital Stats
Engine : 1.6 L., 4-cylinder
Power: 197 hp
Torque: 184 ft-lbs
CVT6-speed Manual
Últimate Sports Styling
Far from being purely cosmetic, the modifications to the JÚKE exterior are designed to enhance the JÚKE NISMO's aerodynamics, resulting in a 37-percent improvement in downforce (versus non-NISMO models). Many of the aggressive sports-cross styling elements were influenced by NISMO's motorsport expertise, in particular using lessons learned from the styling and engineering of the Nissan GT-R racers that compete in the Super GT series in Japan.

Compared to the standard Nissan JÚKE, the most obvious visual change is to the front fascia and grille, which have been modified to better control airflow to the engine. The new front end features a lower and more aggressive design. JÚKE's familiar integrated fog lights have been replaced by thin-strip LED accent lights, positioned at the top edge of new small vents to the side of the larger grille. On front-wheel drive versions these are blanked, but on all-wheel drive models the left-hand side vent allows air into the engine bay for the CVT oil cooler and the right-hand vent is styled to match. 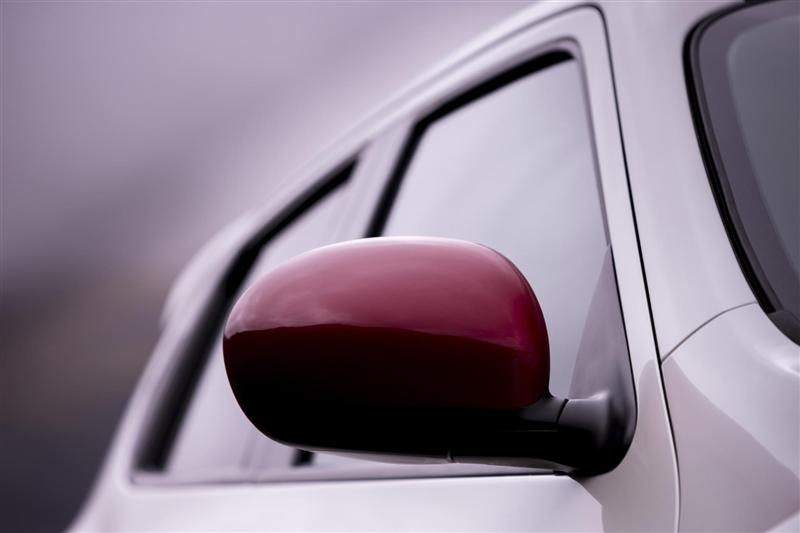 The prominent upper edge of the large lower grille features a red pinstripe, which drops dramatically to curve around the smaller vents and continues all the way to the front wheel arches. This distinctive NISMO cue gives the nose a visual width and presence while emphasising the Juke NISMO's athletic stance on the road. The signature Nissan V-strut grille is finished in a darker shade than other JÚKE models. To the right of the grille is a NISMO badge with a red 'O,' stamping NISMO's distinctive motorsport heritage on JÚKE for first time. The distinctive JÚKE combination lights are smoked as part of the NISMO appearance treatment.

The red pinstripe continues on the flanks of the car at the base of the doors. The sculpted side skirts have been reworked to enhance aerodynamic performance, directing airflow around the rear wheels and away from the car as quickly and efficiently as possible. To increase the JÚKE NISMO's visual stance, the wheel arches are more muscular and are now finished entirely in the body color to give a truly premium feel. The door mirrors have been painted red to give a visual indication to the casual observer that this is not a standard Nissan JÚKE. The B-pillars are now finished in gloss 'piano black,' also promoting a sleek and sporty image.

In the rear, the bumper is deeper than on non-NISMO models and the red pinstripe is also visible on the black sill. A redesigned body-colored liftgate spoiler and rear fascia diffuser complete the body modifications.

Also part of the stunning JÚKE NISMO exterior appearance are the new 18-inch lightweight aluminum-alloy wheels with 225/45R18 Continental ContiSportContact5 summer tires, which help give drivers additional grip during cornering and further boost the JÚKE NISMO's on-road presence. One inch larger than the standard JÚKE wheels, the diamond-cut alloys feature a 10 twin-spoke design and are finished in dark anthracite.

The 2013 Nissan JÚKE NISMO is available in three exterior colors – Sapphire Black, Brilliant Silver and Pearl White. All come equipped with red outside door mirrors and the matching pinstripe around base of the vehicle.

Sporty Interior Styling Focused on the Driver
NISMO's core belief is that everything should be focused on the driver. It's about enhancing their experience, pure and simple. So the JÚKE NISMO's seats, instrumentation, steering wheel, gear knob, pedals and door trims have all been redesigned to boost driver enjoyment by creating a more performance-oriented environment.

The front seats have been redesigned to offer additional lateral support. Trimmed in suede, they sport vibrant red stitching – picking up the detail introduced by the red bodywork pinstripe. Red is also used as a background to the tachometer and also appears on the steering wheel stitching, which is finished in Alcantara and leather. The tactile steering wheel now includes a red marker to indicate 'top dead center,' another feature derived directly from racing. The rear seats also feature red stitching.

Dark Smoke coloring is used throughout the interior to help allow the driver to focus entirely on the elements that are most important – the gauges, switchgear and controls. Consequently the headliner is black (no moonroof is available with the JÚKE NISMO) and there is a gloss 'piano black' finish around the ventilation and audio controls. There is also new smoked grey trim around the gear selector.

In the footwell, the standard black rubber pedals have been upgraded to a metallic finish, and there is a NISMO badge visible on the dead pedal. The NISMO logo has also been precision-stitched into the seatbacks.

Revised Powertrain for Improved Dynamics
NISMO's spirit of innovation and determination, born on the racetrack in 1984, remains at the heart of the performance brand today. This DNA has been injected into the JÚKE NISMO in the form of a reworked version of Nissan's advanced inline 4-cylinder 1.6-liter DOHC aluminium-alloy Direct Injection Gasoline (DIG™) turbocharged engine. Direct injection helps improve combustion, enhancing power, torque, economy and emissions. The use of the turbocharger and intercooler also help boost power, while the variable timing control for both intake and exhaust cycles improves low-end engine response.

The front-wheel drive JÚKE NISMO is equipped with a 6-speed manual transmission, while the all-wheel drive version comes with a sport-tuned version of Nissan's advanced Xtronic CVT® (Continuously Variable Transmission) with manual mode.

Improved engine performance is only one element of Juke NISMO's dynamic enhancements. The suspension settings have been completely revised, leading to greater traction and improved body response and roll control.

The suspension has also been lowered slightly versus non-NISMO JÚKE settings, reducing the gap between the tires and wheelwells for a cleaner appearance and improved aerodynamics. An independent MacPherson strut front suspension and torsion beam rear suspension is utilized on FWD models, while JÚKE NISMO AWD model offers a multi-link rear suspension design. A cradle-type front subframe enhances lateral stiffness of the assembly. Front and rear stabilizer bars are standard on all models.

The JÚKE NISMO's vehicle-speed-sensing electric power-assisted steering has been reworked for sportier and more direct handling. Thanks to increased resistance at the wheel, more feedback is evident at medium and high speeds. Braking is supplied by power-assisted 4-wheel disc brakes with Anti-lock Braking System (ABS) with Electronic Brake force Distribution (EBD) and Brake Assist.

As well as splitting torque front to rear – up to a maximum of 50:50 – the torque can also be shifted from side-to-side across the rear axle. In total, up to 50 percent of the total available engine torque can be sent to either rear wheel. Information collected by various sources (measuring wheel speed, steering angle, yaw rate and lateral G-force) is interpreted to anticipate the driver's intention. System actions are relayed to the driver via a real-time graphic display on the instrument panel depicting the torque distribution under all conditions.

Both FWD and AWD JÚKE NISMO models include another example of advanced Nissan technology – the innovative Integrated Control (I-CON) system that combines control of the automatic A/C and the three-mode drive selector – Normal for everyday driving; Sport for a more intense performance feel; and Eco for maximum efficiency – adjusting throttle, transmission (CVT) and steering feel.

The centrally mounted I-CON digital screen changes display, color and functions depending on the mode selected by the driver. Settings alter throttle maps, steering effort and CVT shift schedules on the AWD models. In the D-Mode Sport setting, the throttle map is retuned to deliver higher engine revs and sharper responses, while in the Eco setting, engine revs are reduced for more gentle progress. In the M-CVT version (AWD only), the Sport setting even introduces a 'rhythmic' auto upshift that simulates manual gear changes at redline.

In addition, steering effort in Sport is firmer and more responsive, while in Normal it's lighter and more linear. In the Eco setting, the quantity of cold air circulating in the cabin is optimized, reducing the load on the climate control and lowering the system's power consumption.

Said Loing: 'For a vehicle of its compact size and attainable price, JÚKE NISMO packs a huge amount of advanced performance technology.'

A Range of Available Features and Amenities
The 2013 JÚKE NISMO is offered with a range of features that add a level of convenience equal to its sporty style, including an available Nissan Navigation System with 5-inch color touch screen display and NavTraffic capability (SiriusXM subscription required, sold separately), Rockford Fosgate ecoPÚNCH™ audio system, ÚSB interface (iPod® compatible) and RearView Monitor.

Said Loing: 'The JÚKE NISMO combines distinctive style, advanced technology and a fun-to-drive factor that is unlike anything in the segment – all at an attainable price. It optimizes the already innovative JÚKE design, re-engineering it to NISMO standards and sets the stage for future NISMO-branded models to come.'Source - Nissan 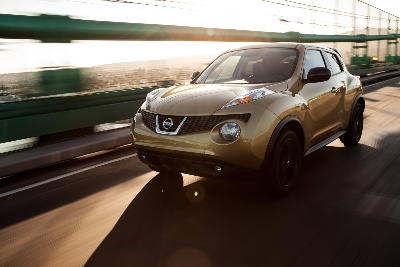