The Nissan Frontier, which combines premium hardware, extraordinary power and off-road athleticism, continues to be a leader in the mid-size truck segment. For 2013, Frontier again offers an exceptional level of on- and off-road performance with the use of a 4.0-liter DOHC V6 engine rated at 261 horsepower and 281 lb-ft of torque. A 152-horsepower 2.5-liter inline 4-cylinder engine is also available (4x2 King Cab only). With its strong performance, combined with good fuel mileage (19 city, 23 highway, I4 King Cab 2WD M/T), the Frontier is a fitting truck for work or play.

Fuel economy for most 2013 Frontier models has increased one-to-two miles per gallon due to reduced engine friction and enhanced aerodynamics. A seal has been added between the cab and bed, the front spoiler has been extended and rear tire wind deflections and a new tailgate spoiler have been added.

The 2013 Frontier model lineup consists of Frontier S, Frontier SV, Frontier PRO-4X (4x4 models only) and Frontier SL (Crew Cab only). It is offered in both King Cab and Crew Cab body styles, in 4x2 and 4x4 driveline configurations, with both manual and automatic transmissions.

Long Bed models are available with Frontier Crew Cab SV and Crew Cab SL. Measuring more than 13 inches longer than the Crew Cab's standard bed, the Long Bed models offer the roomy interior of the Crew Cab plus the extended bed space of the King Cab. The 2013 Frontier also provide levels of innovation in an area where it matters most to truck owners – the bed. Both Frontier King Cab and Crew Cab offer an available high-utility bed that includes a factory-applied spray-on bedliner and the Útili-track™ tie-down system. The Útili-track™ system, first introduced on Nissan Titan, provides ultimate cargo hauling flexibility through the use of five special 'C' cross-section rails mounted in the bed (two channels in the bed floor and one each on the bed side rails and the bed header panel). Removable utility cleats slide into the channels, providing a wide range of attaching points for securing cargo. In addition to the tie-down cleats, a full range of accessories is offered for use with the channel system, including bed dividers, sliding cargo trays and modular storage units. A new spoiler is added to the standard locking detachable tailgate on all models for 2013.

The Frontier exterior also features tinted front window, rear privacy glass and a hitch ball provision on the rear bumper. Frontier SL models include chrome front grille, chrome outside mirrors and door handles, along with tubular step rails and front fog lights. A roof rack with cross bars is available with the Crew Cab SL, while a power tilt and sliding moonroof is offered on Crew Cab SL models.

Frontier's long 125.9-inch wheelbase helps enhance ride comfort, while the overall length of 205.5 inches (King Cab and Crew Cab Regular Bed) is a perfect 'activity size' for buyers who don't need a true full-size pickup. Frontier shares its suspension layout and many component designs with the Titan, including its all-steel double-wishbone front suspension and solid axle rear suspension with overslung leaf springs and a long suspension stroke for off-road performance.

Frontier 4x4 models are available with 4-wheel limited-slip system, which helps transfer power to the drive wheels with more grip on low traction surfaces. The available Hill Descent Control feature allows slow hill descent without the constant application of the brake pedal. Hill Descent Control must be engaged by the driver (via a switch) and is available only when the transfer case is engaged in 4H or 4LO (it works in both forward and reverse). It can be activated at speeds up to 21 mph in 4H and 15 mph in 4LO. Hill Start Assist (HSA) allows the driver to stop on an incline, release the brake pedal and not roll back for up to two seconds while the driver moves their foot to the accelerator for a smooth, controlled start. HSA operates in 4x4 models in 2WD, 4H and 4LO. HSA is designed for rugged, low-speed off-road driving situations. Hill Descent Control and Hill Start Assist are standard on all V6 Frontier SV, SL and PRO-4X 4x4 automatic transmission-equipped models. A 2-Wheel Brake Limited Slip (ABLS) system is standard on all 4x2 models.

All key underbody hardware is tucked up to the frame rails for a minimum 8.9 inches (4x4) or 8.6 inches (4x2) of running ground clearance on V6-equipped S, SV, SL and PRO-4X models. Every Frontier also offers good approach and departure angles for exceptional off-road capability.

Frontier's maximum towing capacity is rated at up to 6,500 pounds (maximum, when properly equipped).

A limited number of option packages are offered for the 2013 Frontier, starting with the S Preferred Package (King Cab I4 models only), which adds air conditioner and AM/FM/CD with digital clock. 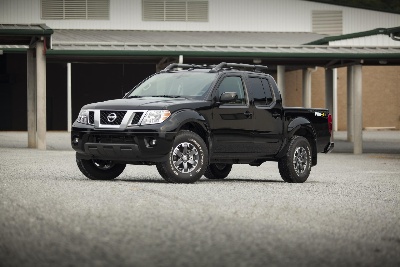