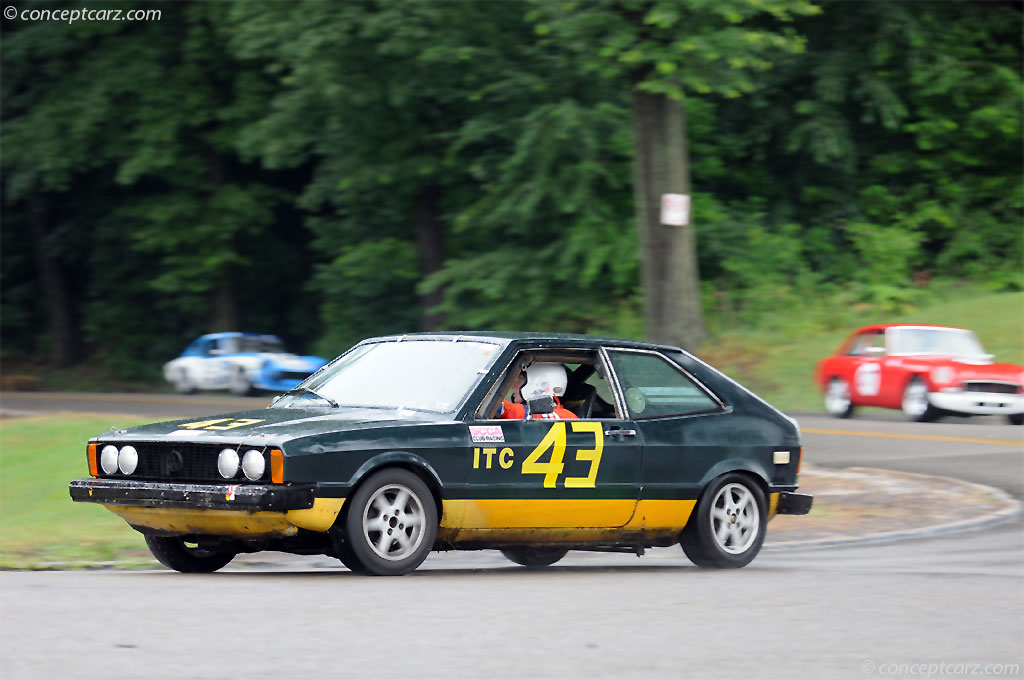 The Volkswagen Scirocco was produced from 1974 through 1992. Though production lasted until 1992, the United States stopped receiving the vehicle in 1988 and Canada followed a year later. Germany ceased production in 1992. A concept has been shown at the 2006 Paris Auto Show, dubbed the Iroc (scIROCco). The Scirocco was used as a replacement for the Karmann Ghia; internally, the Scirocco was known as the Type 53. The production version was ready for Europe in 1974 and North America in 1975.The Volkswagen Scirocco A1 chassis shared its platform with the Golf and Jetta, a cost saving move for the company. It was powered by a variety of four-cylinder engines from 1.1 to 1.6 liters in size. All had single-overhead camshafts and a total of eight valves. The Giorgetto Giugiaro styled body was sporty and attractive, which complimented the vehiciles sporty characteristics rather nicely. The Volkswagen Scirocco MKII was introduced in 1982. The base engine was now a 1.3 liter engine with the optional 1.8 liter, double overhead camshaft engine greatly improved performance. In Europe, a 16V 2.0 liter engine that produced nearly 140 horsepower was available on the MKII. The MKII sat on the MKI's same platform. By 1984, the Scirocco received an cosmetic update as well as a slew of interior amenities such as power windows and mirrors, air conditioning, manual sunroof, and leather.
By Daniel Vaughan | Sep 2006
Introduced in 1974, the Scirocco was considered to be the replacement for the Volkswagen Karmann Ghia. The two cars, though, were worlds apart. The Karmann Ghia was underpowered, with an uninspired, ancient air-cooled flat four slung behind the rear axle. It was based off the simple Beetle's running gear, but at least had swoopy, Italian-bred styling by Ghia. It sounded like the polar opposite of the Scirocco, which had taut, straight lines and a relatively lively, water-cooled power plant. How, then, was the Scirocco considered a relative, let alone the replacement, of the Karmann Ghia? Sure enough, the Scirocco followed right behind the Karmann Ghia‘s production, which ended in 1974. There is a much greater connection, though. To see it, we must consider Volkswagen's bread-and-butter cars during both the Karmann Ghia and the Scirocco's most prosperous years.The Karmann Ghia, introduced in 1955, came about when the Beetle was still a remarkable car. The Bug was sturdy, reliable, and full of thoughtful design features absent in other cheap cars. By creating the Karmann Ghia, Volkswagen made a charming, if slow, sports car with reliability built in to a stylish package.
The Scirocco followed word for word the formula used by the Karmann Ghia. When the Scirocco made its debut, though the undying Bug was still around, the Golf was Volkswagen's real interest. That car was set up to phase out the old-fashioned Beetle with a modern, water-cooled machine that was just as sturdy and reliable as a Volkswagen should be. The Golf, though, was also as boring as a Volkswagen should be. So Volkswagen contracted Giugiaro, like Ghia a famous Italian designer, to add some life to a rugged platform.
Thus the Scirocco was born, a modern version of the Karmann Ghia featuring a sporty body resting over a dependable structure. That body was a hit, too. A product of the 1970's, it lacked the curvy charisma of the Karmann Ghia. Its wedge shape was fashionable for the time, though, and Giugiaro's skilled touch was evident. The car's creases had a modern Italian flair about them, and the racier lines were surprisingly practical. The new VW featured a hatchback and back seat offering about the same amount of room as the space-effective Golf upon which it was based.By December of 1981, a second generation Scirocco was available. Its face-lifted styling was carefully executed in-house by Volkswagen. This second generation model featured water-cooled straight fours producing from 75-110hp out of the same 1.5 and 1.6 liter displacements of the first generation vehicles.The desirability of a reliable German with sporty style was proved by the Scirocco's long production run. It lasted all the way until 1992, completing an 18 year stint remarkably similar to the Karmann Ghia's 19 years of production. To some, the Scirocco and Karmann Ghia will always be wolves in sheep's clothing, little more than dressed-up family cars. These Volkswagens, though, deserve much more credit than that. The Scirocco buyer received not just a practical, modern hatchback with sturdy construction, but also a sleek and carefully-crafted design guaranteed to age with more grace than others in its price range. That synergy of style and solidity was an impressive feat.The site http://www.sciroccoregister.co.uk/ was used in the making of this writing. By Evan Acuña