Boattail Speedster
General Motors employee, Phil 'Red' Shafer built a reputation from 1931-1939, with his famous Buick straight-eight powered race cars. Seven of Shafer's Buick-powered race cars qualified for the famed Memorial Day Classic from 1931 until 1936.This two-seater Shafer 8 recreation provides a fearful insight into racing's dangerous past, and is equipped with a Rigling and Henning special-built chassis fitted with a Straight 8 engine from a Buick Series 60. The 344 CID engine develops 200 horsepower, is equipped with four Stromberg 97 carburetors, and backed by a GM three-speed transmission. Suspension components include heavy-duty shocks from a Buick Roadmaster of that era. The vehicle rides on 6.00-20 Firestone Indy Racing Tires. Top speed is 130 MPH.Sitting almost straight upright in the car, the rider's head and shoulders are open to the wind, which can whip by at an impressive velocity. In-the-day there were no seat-belts, no padded dash, and no airbags. The riding mechanic could only hope for good driving, and good luck. And in most cases, good weather.
This Shafer 8 Buick has made its way across the United States more than 10 times, taking part in Great Race events. 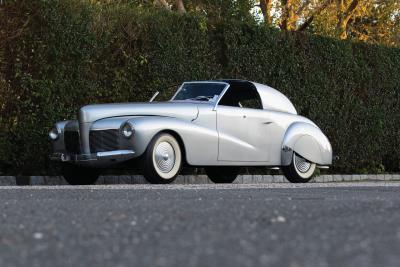 Prominent East Coast Collector to Offer Jaguar XKSS and Two Extra Special Mercury Customs at RM Sothebys Petersen Museum Auction in Los Angeles Known both as a restauranteur and collector, New...
© 1998-2020. All rights reserved. The material may not be published, broadcast, rewritten, or redistributed.