Tatra Motors had begun experimenting with aerodynamic designs as far back as the early 1930s. Their T-77 was the world's first aerodynamically styled car with an air cooled, rear-mounted engine. This car, the T-87, was built from 1936 to 1960 and is powered by a rear-mounted, 2.9-liter air-cooled, OHC V8 producing 85 horsepower. Its top speed approaches 100 MPH and it was considered very fast in its day.Production of the T-87 began in 1936. During WWII the German high command favored the T-87 for its speed and handling prowess. Many German officers viewed it as a 'good Autobahn car.' While not the sort of accolades a PR department would solicit, the Third Reich also considered it reliable transport on the cold and forbidding Eastern front.Design-wise, it certainly boasted unique styling; three headlights in front; a dorsal fin in the back and large scoops for airflow to the air-cooled engine. Its streamlined shape was based on renderings by Paul Jaray, designer of the famous Graf Zeppelin dirigibles. The fin was intended to divide air pressure on both sides of the car to improve handling, a technique later used in aircraft. Contemporary wind tunnel testing showed the T87 had a drag coefficient of 0.36. The rear section opens for servicing the engine and the front doors are suicide doors.
This car was bought in the Czech Republic, brought to the United States and carefully restored. It was entered in the prestigious vintage rally, the Great Race, in 2002 and 2003.

Sold for $126,500 at 2013 Bonhams - Quail Lodge Auction.
The Czech firm of Tatra dates back to 1850 and had a reputation for technical innovation thanks largely to the talents of Austrian engineer Ledwinka. Hans Ledwinka was Tatra's chief engineer and one of the most original engineers in history. He began experimenting with the application of low-drag aerodynamics to passenger car design in the early 1930s in collaboration with his colleague Erich Übelacker and Zeppelin aerodynamicist, Paul Jaray. The first of Tatra's 'aerodynes', the T77, appeared in 1934. It was the world's first series-produced car designed with aerodynamic efficiency as the foremost consideration. The T77 featured Ledwinka's trademark, independently-suspended backbone chassis and was powered by a 3.0-liter air-cooled V8 engine mounted at the rear. Extensive use of magnesium alloy was used for the engine, gearbox, suspension and body which helped keep the weight down to 1,700kg.
Power was provided by a 60 horsepower engine and with the low drag coefficient of around 0.21, it was capable of reaching 145 km/h.
The T77 was superseded by the T77A, which benefitted from a 3.4-liter engine and a higher top speed of 150 km/h.The Tatra was comfortable, fast, futuristic, and economical. It was, however, known for having its deficiencies in handling. For 1936, Ledwinka responded with the T87, which was both shorter and lighter than the T77. Power was provided by a 3.0-liter V8 and had a top speed of 160 km/h (100 mph). During the war, production was suspended, but resumed when peace time resumed. Production continued to 1950, by which time a little over 3,000 had been sold.Design features of the T87 included the 'cyclops' third headlamp, rear fin and full unibody construction with belly pan. Beneath the coachwork was a rear-mounted 2.9 liter magnesium alloy, air-cooled overhead-cam V8 offering 85 horsepower. Suspension was fully independent, with hydraulic brakes. The aerodynamic design of the T87 helped influence Dr. Ferdinand Porsche's design of the Volkswagen Beetle. The similarities were so evident that Tatra subsequently sued the German company for infringing 11 different patents.Between 1936 and 1950, over 3,000 examples were built. It is believed that ten examples currently reside in the United states One is in the Jay Leno Collection and another in the Peter Mullin museum. Other noted owners have included Ernst Heinkel, Felix Wankel, Erwin Rommel, John Steinbeck, King Farouk of Egypt and Sir Norman Foster.This example was sourced in Canada in somewhat dilapidated condition by North American marque specialist Alex Veronac. A restoration began in Canada and finished in the United States at Burnham's Garage in Delanson, New York. The car was finished in its original green livery with matching green leather interior. The total cost of the restoration was $150,000.
By Daniel Vaughan | Nov 2013

In order to cure the somewhat erratic handling of the earlier T77, Hans Ledwinka came up with the T87, which was both shorter and lighter than the T77. Powered by a 3.0-liter V8, the T87 was good for a top speed of 100 mph. Introduced in 1934, production paused during World War II then resumed thereafter and continued up to 1950, by which time slightly more than 3,000 had been sold.
The Tatra T87 was produced from 1936 through 1950 with a total of 3,056 examples produced. They were designed by Dr. Hans Ledwinka and were an improved version of the Tatra T77 model. The Tatra marquee was responsible for some of the most technically sophisticated cars of their time and they have a history that dates back to 1850 when they were founded by Ignac Sustala as a wagon and carriage maker in Nesseldorf, Czechoslovakia. Their unusual approach and controversial designs are attributed to the Austrian engineer Hans Ledwinka, who has spent his early career working with automobile and aircraft designer Edmund Rumpler. His Tatra T11, created in the early 1920s, was designed as a 'people's car' and meant to cater to many people's needs and budgets. The T11 and T12, remaining in production until 1933, were built a reputation for their reliability, durability, and capability.
The Tatra models would feature many innovations such as a horizontally-opposed, air-cooled engine, a fully independent suspension, and a tubular 'backbone' chassis mounting the engine, transmission, and final drive at the rear as a single unit.
In 1930, Ledwinka and Erich Ubelacker began work on a new prototype that eventually evolved into the V570. This new prototype used swing axles and a rear-mounted, air-cooled engine and had low drag thanks, in part, to its streamlined bodywork. This aerodynamic body was created with the skill and knowledge of Paul Jaray. The work of the V570 prototype project resulted in the Tatra T77 model introduced in March of 1934. It is regarded as the first production car designed using aerodynamic principles.
It was one of the most advanced and modern vehicles on the road, however, the time and expense required to create this coach-built vehicle made it too expensive for most customers. In 1936, Tatra introduced the T87 model. This was meant as a replacement for the T77 and was simpler and relatively more affordable, built on a shorter wheelbase that measured 124-inches. The interior provided seating for six from the Bauhaus-style seating. The T78 incorporated full monocoque construction and was powered by an air-cooled, magnesium alloy V8 engine with hemispherical combustion chambers and a single overhead camshaft per cylinder bank. Top speed was in the neighborhood of 100 mph for this sporty vehicle. Following the German annexation of Czechoslovakia in 1938, T87 production continued, halted briefly in 1943 and 1944. After the war, production continued until 1950. During the Soviet occupation of Czechoslovakia, Hans Ledwinka was imprisoned for six years. He was later sent back to his native Austria. Ferdinand Porsche's prewar KdF Wagon evolved into the Volkswagen Type 1. This later became known as the Beetle, which not only shared a resemblance to the Tatra T87 but also shared many of the same design philosophies.
By Daniel Vaughan | Apr 2009 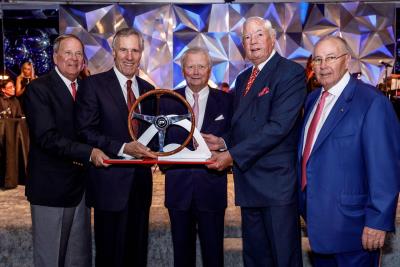 Iconic sports car patriarch will collaborate with Petersen Directors on future plans for the museum LOS ANGELES (December 19, 2018) – Nearing its 25th anniversary as a world leader in automotive thought, the Petersen Automotive Museum...

PEBBLE BEACH, Calif. (February 20, 2014) -- Maserati, a marque renowned for its racing greats as well as road cars offering both elegance and sporting performance, takes center stage at the 64th annual Pebble Beach Concours dElegance. The event,...
© 1998-2020. All rights reserved. The material may not be published, broadcast, rewritten, or redistributed.