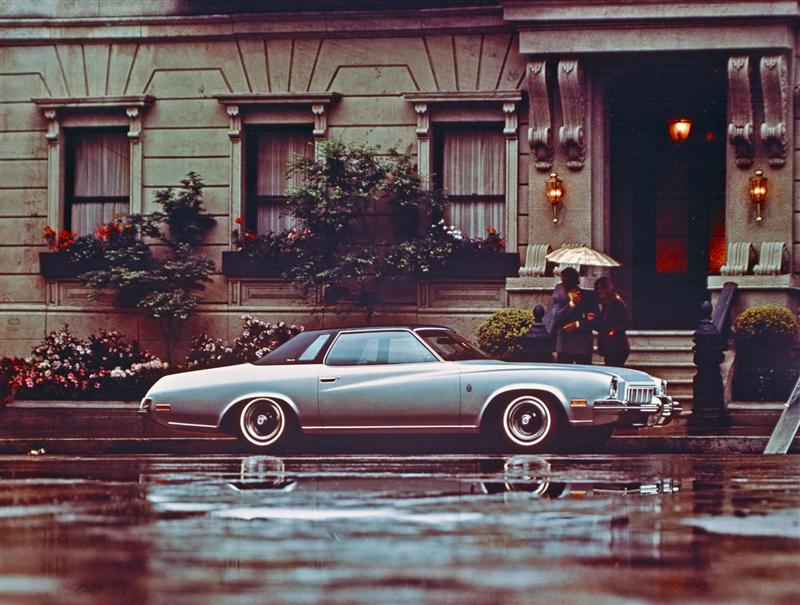 1973 was a monumental year for Buick with the introduction of Century, Century Luxus, Regal, and Apollo Series, along with the 'colonnade' styling for the Century, Luxus, and Regal. The Apollo Series was a mid-year introduction and served as Buick's re-entry into the growing compact car market that had grown in importance and necessity due to the oil crisis and fuel shortages. The Luxus and Regal were part of the new intermediate Century line built on the GM A-Body platform. The Luxus line offered finer interior appointments and additional trim than the 'base' Century 350, and the Regal added even more accouterments and unique styling. The Century and Luxus were offered as hardtop coupes, hardtop sedans, and a 6- and 9-passenger station wagon, while the Regal was offered solely as a two-door hardtop coupe with seating for five. Buick Century styling included single round headlights in square bezels that were positioned near a thin crosshatch grille with three bright horizontal division bars. The Regals shared their front and rear styling with the Century but with several distinct styling cues. They had their own unique grilles with a vertically segmented design. To help distinguish these cars, there were special crest emblems located on the front fender sides. Buyers had the option of selecting the Gran Sport package which added special styling, suspension features, an electric clock, wheel opening moldings, instrument gauges, a glove box, ashtray, and courtesy lamps.Interiors were more luxuriously appointed than the lesser Century models with door-pull straps, bench seats with center armrests with cloth, vinyl, or velour upholstery, and woodgrain trim on door panels and dashboard. A 60/40 split-bench seat with an armrest was optional equipment.
The Regal was Buick's intermediate-sized, highly trimmed, personal luxury vehicle, and officially marketed as the 'Century Regal Colonnade Hardtop coupe.' The 'Colonnade' pillared hardtop roofline was shared with the Chevy Monte Carlo, Pontiac Grand Prix, and the Oldsmobile Cutlass Supreme, along with the Buick Century Luxus coupe. They all had opera windows surrounded by sheet metal, replacing the traditional roll-down windows.
Although offered solely as a coupe in its inaugural year, it gained a sedan body style the following year. The styling introduced in 1973 would continue through 1977, with minimal changes through most of the years, albeit a substantial update in coupes occurring for 1976. The standard engine for 1973 and 1974 was the 350 cubic-inch V8 with overhead valves, 8.5:1 compression, a two-barrel carburetor, hydraulic valve lifters, an 8.5:1 compression ratio, and delivering 150 (SAE) horsepower at 3,800 RPM. This engine was standard on sedans from 1975 to 1977, and optional on coupes during those years. A larger 455 cubic-inch V8 was optional for 1973 and 1974 models only. This engine also had overhead valves, hydraulic valve lifters, a four-barrel carburetor, and 255 (SAE) horsepower at 4,000 RPM. Beginning in 1975, the Regal Coupe came standard with Buick's resurrected 231 CID V6 previously powering the Skylark of 1964 through 1967. Buick had sold the tooling to Kaiser Motors for use in Jeep models, and following a series of divisional changes, it was sold back to GM by AMC in 1974. Engines were backed by a three-speed Turbo-Hydramatic. In 1975, the 'Century' portion of the Regal name was dropped. For 1973, the Buick Regal hardtop coupe had a base price of $3,470, approximately $140 higher than the comparable Luxus and $415 higher than the 'base' Century 350. The Regal proved popular with 91,557 examples built, much higher than the 66,845 combined examples of the Buick Regal coupe and sedan of 1974, and more than the 67,372 examples built-in 1975.
By Daniel Vaughan | Oct 2013

Frequently sharing the same body and power-train as the Century, the Buick Regal was a mid-size vehicle that was produced by General Motors Buick division from 1973 through 2004. Slow to react to develop in the lower priced mid-size personal luxury market, Buick wanted to market to compete against the Olds Cutlass Supreme, the Grand Prix and the Monte Carlo. The Regal was introduced in 1973....
Continue Reading >>

DETROIT – The addition of the Regal nameplate to the Buick family goes back 40 years, but even today, the Regals heritage as a sporty, mid-size luxury vehicle is strong as ever. Introduced in 1973, the Century Regal, as it was originally called, served as an upmarket model in the Century line and one of GMs first personal luxury cars. Designed with sporty suspension characteristics....
Continue Reading >>
Concepts by Buick