Coupe
Chassis #: DBR/05
Sold for $440,000 at 2013 Gooding and Company - Pebble Beach.
Aston Martin's history and heritage is renowned for its racing success and its road-going vehicles. Prior to the company's re-emergence back into racing in the mid-2000s, their last real success dated back to 1959 when Carroll Shelby and Roy Salvadori won an overall victory in the Le Mans 24 Hours. Over the decades that followed, the company would make several attempts at racing, with varied successes along the way. In 2004, the company introduced the all-aluminum Aston Martin DB9 coupe and convertible. With the help of Prodive, Aston Martin Racing began work on a racing version of the DB9. In November of 2004, Aston Martin introduced their DBR9 racer at the company's Gaydon headquarters. In keeping with its tradition of the 1950s, the car was painted bright metallic green with bright yellow accents. The DBR9 was similar to the DB9 but with much less weight and most of the suspension parts strengthened. The V-12 engine was modified from 450 BHP to 600 BHP. The body was also improved for racing with a big splitter, diffuser, ground-effects, and rear wing.
Aston Martin used the 2005 season to further develop and test the DBR9. From 2006 privateers were given the opportunity to obtain identical DBR9 models.
The DBR9 made its racing debut at the 2005 Twelve Hours of Sebring where it won its class, beating out its rival Corvette. The cars raced at one more event (Silverstone) prior to the 24 Hours of Le Mans. At Silverstone, the team scored a one-two victory. On June 5th of 2005, Aston Martin raced two DBR9 models at Le Mans. The company had made slight modifications to the front body kit and the rear wing.In 2007, the DBR9 won its class at the 24 Hours of Le Mans sporting 007 and 009 race numbers evolving the marque's James Bond heritage. The result was repeated in 2007 wearing the Gulf sponsorship livery. In addition to the factory Prodrive, Larbre Competition, and BMS Scuderia Italia campaigning, private teams were afforded similarly competitive racing with the use of the DBR9. One such private team was Bell Motorsports who purchased DBR9/05 to campaign in the 2008 American Le Mans Series. DBR9/05 was finished in metallic dark green and given race number 008. Its racing debut was at the Twelve Hours of Sebring and was driven by Terry Borcheller, Chapman Ducote, and Antonio Garcia. It finished 16ht overall and 3rd in class with the two team Corvettes in front. The next race for DBR/05 was at the Grand Prix of St. Petersburg where it was involved in an unfortunate accident. Bell repaired the car in time for testing at the Homestead Miami Speedway on July 2nd. The team was set to return to competition at Lime Rock with DBR9/05 in its new Bell livery of silver and blue. At the Northeast Grand Prix, the car was involved in yet another incident and failed to complete the race. The minor damage was repaired and the team turned their attention to the Generac 500 at Road America - Elkhart Lake. Borcheller and Ducote were able to bring the car home to a 2nd in Class and 17th overall just 7 laps off the race-winning Audi R10s. At the Grand Prix of Mosport, the team achieved 3rd in Class and 14th overall. The Detroit Grand Prix was met with another 3rd in GT1, finishing 18th overall.At the season's close, the team achieved 2008 ISA Cup Champion GT1, 2008 American Le Mans Series LMGT1 team Championship 2nd Place, 2008 American LeMans series GT1 Driver's Championship 3rd Place, and a culminating Official Entry in GT1 at the 2009 24 Hours of Le Mans. The team also accrued no mechanical DNFs and no penalties.
After the season, DBR9/05 was restored to Aston Martin Racing livery and joined the private collection of the car's current owner.
This car is one of just 16 such DBR9s produced.
By Daniel Vaughan | Jan 2014

ALMS Makes First Visit To Circuit Of The Americas The American Le Mans Series presented by Tequila Patrón makes its first visit to Austins stunning Circuit of The Americas on Saturday, Sept....

Looking ahead to the unification of North American sports car racing in 2014, Dyson Racing has shuffled its driver lineup for the remainder of the 2013 American Le Mans Series presented by Tequila Patrón... 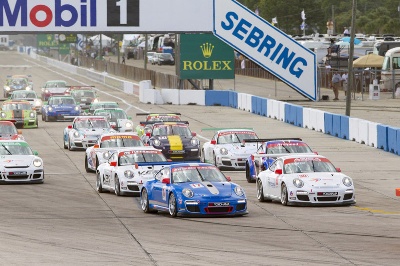 Plans include a new team in the ALMS GT Class and continued efforts in the GTC and GT3 Challenge series, off-road racing and drifting FULLERTON, CA (March 7, 2013) – From desert racing to drifting,...
© 1998-2020. All rights reserved. The material may not be published, broadcast, rewritten, or redistributed.