Aston Martin introduced its DB4 model in 1958, the first of a line that culminated in the DB6 built between 1965 and 1969. General manager John Wyer had the DB4 styled in Italy, rather than by the works, and the commission was executed by Touring of Milan. Aston Martin's chief engineer, Harold Beah, created the platform chassis, while the new twin overhead camshaft engine was the work of his colleague, Tadek Marek, and race-tested in the DBR2 before its production debut in the DB4. The arrival of the DB5 in 1963 brought an increase in engine capacity, with its bore growing from 92 to 96mm, and displacement from 3.7 to 4.0-liters. This engine was carried over to the DB6 for 1966. With triple SU carburetors installed, the engine developed 282 horsepower, rising to 352 horsepower in Vantage specification on triple Webers. Borg-Warner automatic transmission was offered alongside the standard ZF five-speed manual gearbox, and for the first time, power-assisted steering was an option.

The Aston Martin DB 2/4 Mark III, the predecessor to the DB4, rested on a 99-inch wheelbase platform and was powered by a 2.9-liter Lagonda inline-6 and in standard configuration (with twin SU carburetors), developed 178 horsepower. Girling disc brakes and a Laycock-de Normanville overdrive system were optional, and a hydraulically operated clutch was a new feature. The live axle rear setup and the worm-and-sector steering were from the Mark II. Body styles included a hatchback, two-seater coupe, and a 'drophead coupe' convertible. Production lasted from 1957 through 1959 with a total of 551 examples built.

The wheelbase of the DB4 was an inch shorter than its predecessor, its overall length was five inches longer, and it was an inch taller. Servo-assisted disc brakes were standard, with the early 11.5-inch Dunlop units later replaced by Girlings. The Marek-designed double overhead camshaft straight-6 engine displaced 3,670cc and its cylinder head and block were cast from R.R. 50 aluminum alloy. With twin-Su carburetors installed, it offered 240 horsepower, over sixty more horsepower than the previous engine. The suspension used a live rear axle with coil springs and a Watt's linkage, while the front was independent with ball-jointed wishbones and coil springs. The steering now used a rack-and-pinion arrangement. Body styles included a 2+2 coupe, 2-seater coupe, and a 2+2 drophead. The design was courtesy of Carrozzeria Touring and the production of the DB4 lasted from 1958 through 1963 with 1,204 examples built during that time (including DB4 GT and GT Zagato).

The Aston Martin DB6
Aston Martin introduced the DB6 in 1965 at the London and Paris Motor Shows and its wheelbase and length had been increased slightly, by 3.5-inches and 2.9-inches respectively. Its design resembled the DB5 even though the DB6 abandoned its predecessors' Touring-designed Superleggera body framework, adopting a conventional steel fabrication clad, as previously, in aluminum panels. With the slightly larger platform and changes to the construction techniques, the DB6 weighed just 17 pounds heavier than the DB5.

The DB6 had a raised roofline, reshaped rear quarter windows, and a more-raked windscreen. The tail-lamp clusters were revised, quarter-bumpers at each corner, and an oil-cooler air scoop resided low on the front valance. The opening front quarter-lights made a re-appearance while the rear-end sported a Kamm tail offering improved aerodynamics. Wind tunnel testing, which began in February 1965 on the development car, registered 4 YMC, revealed aerodynamic life which resulted in reduced rear-wheel traction at higher speeds. This issue was resolved with the rear lip-spoiler, abbreviated Kammback tail, the lengthened wheelbase, and the relocation of the rear axle.

Aston Martin explored the use of a de Dion rear axle but ultimately reverted back to the live-axle configuration with high-tech Armstrong Selectaride cockpit-adjustable rear shock absorbers as available on the DB5.

The ZF five-speed manual transmission was standard while the BorgWarner three-speed automatic was a 'no-cost extra.' Power steering and air conditioning were optional, as was the Vantage specification which continued to use triple side-draft Weber 45DCOE carburetors bringing output to 325 horsepower (compared to 314 bhp of the DB5). The standard engine configuration of the 3,995cc unit breathed through triple SU carburetors with 282 horsepower at 5,500 RPM. The standard setup had 8.9:1 compression while the Vantage specification used 9.4:1 compression.

Body styles included a two-door coupé with 2+2 seating and a Volante four-seat convertible. The Volante was introduced in 1966 at the London Motor Show and replaced the previous Volantes which were built atop the DB5 chassis (known as 'short chassis' Volantes). Approximately six or seven examples were built as Shooting-brakes by British coachbuilder Harold Radford, with three additional examples by FLM Panelcraft.

Aston Martin announced the DB6 Mark II on August 21st of 1969 with several new features, many of which were later used on its successor, the DBS. The Mark II received flared wheel arches and wider tires on 1/2-inch wider wheels. Power-assisted steering was standard and an AE Brico electronic fuel-injection system with a higher compression ratio cylinder head was offered as optional equipment.

Production
During the five years of DB6 production, from 1965 to 1970, a total of 1,788 examples were built. Approximately 140 examples were the DB6-based Mark I Volantes, including 29 with the Vantage specification. An additional 38 examples were Mark II Volantes.

Compared to the DB4 and DB5, the DB6 had more room for rear passengers, making it better suited as a 'family man's car,' and helping it sell better than the earlier models in the series. The slightly higher roofline and aerodynamically efficient abbreviated 'Kamm' tail gave it a unique appearance. The arrival of the DB6 Volante convertible marked the first occasion that this evocative name had been applied to a soft-top Aston Martin. The stylish Volante offered four-seat accommodation and was luxuriously appointed with deep-pile carpets, leather upholstery, and an electrically operated hood.

The Aston Martin DBS
The Aston Martin DBS was introduced in 1967, meaning that it was alongside the DB6 for three years. It was built until 1972 when it was eventually phased out and replaced by the Aston Martin V8. WIth its 102.8-inch wheelbase and length of 180.3-inches, the DBS was larger than the DB6, offering four full-sized seats, and powered by the same 4.0-liter engine. The standard output was 280 bhp while the Vantage specification offered 325 horsepower. The vehicle's design was courtesy of William Towns and incorporated a fastback style rear end with a squared-off front grille.

The DBS was the final Aston Martin to be developed under David Brown's control, and during its production lifespan, a total of 787 examples were built.

Robert Bamford and Lionel Martin created the Aston Martin Company in 1913 for the sole purpose of racing. They built a car that sat atop an Isotta-Fraschini chassis. The name of the company was in honor to the Aston Clinton Hillclimb race combined with Lionel Martins surname. After World War One they created their own cars which quickly gained a reputation for reliability and speed by setting many....
Continue Reading >> 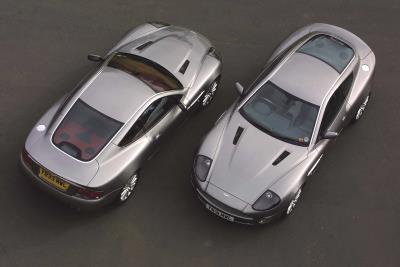 Two decades on, the highly desirable V12 Vanquish remains a seminal car for the Aston Martin marque This cutting-edge Newport Pagnell-built model was, at the time, the most advanced yet to wear an Aston Martin badge Drive-by-wire throttle and F1©... 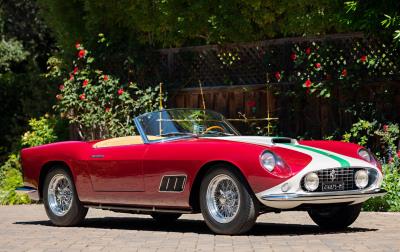