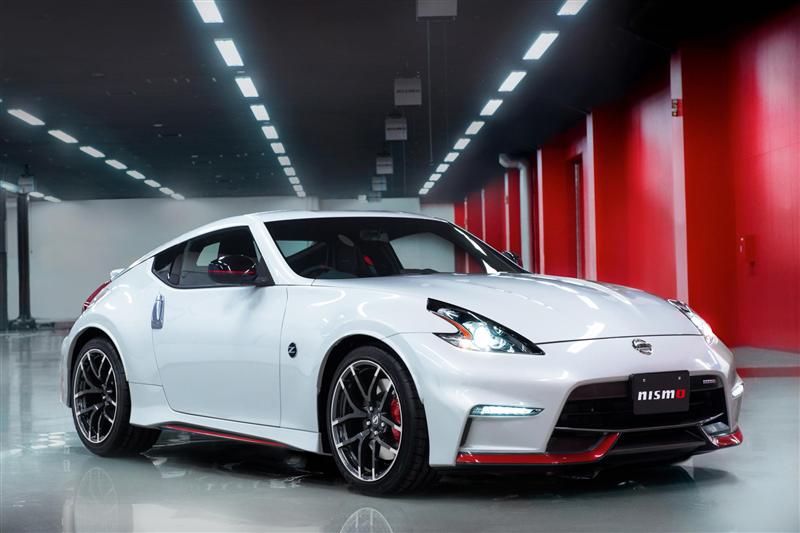 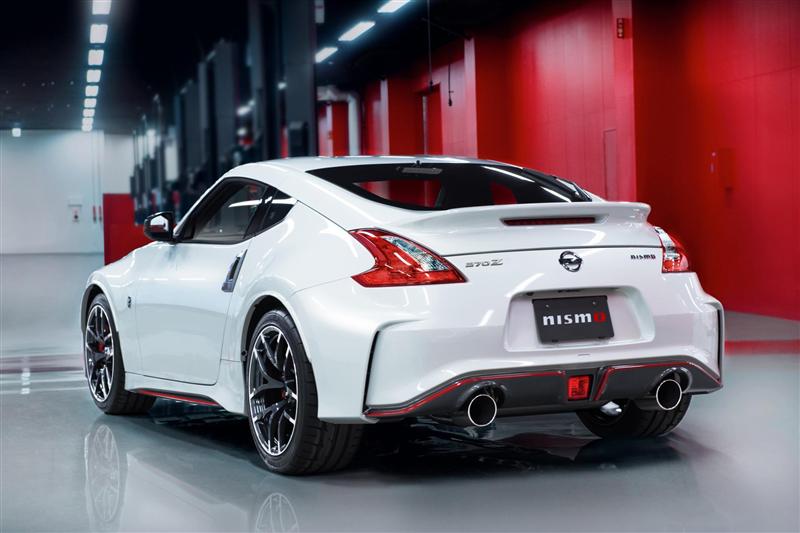 FONTANA DAM, North Carolina – There was a surprise 'guest' today at ZDAYZ, the annual gathering of hundreds of Nissan, Datsun and NISMO owners and enthusiasts – the world debut of the new 2015 Nissan 370Z NISMO. A solid progress for 2015, the new 370Z NISMO model features exterior, interior and performance refinements, along with an expanded model selection that includes both 6-speed manual and 7-speed automatic transmissions and a new 370Z NISMO Tech grade. 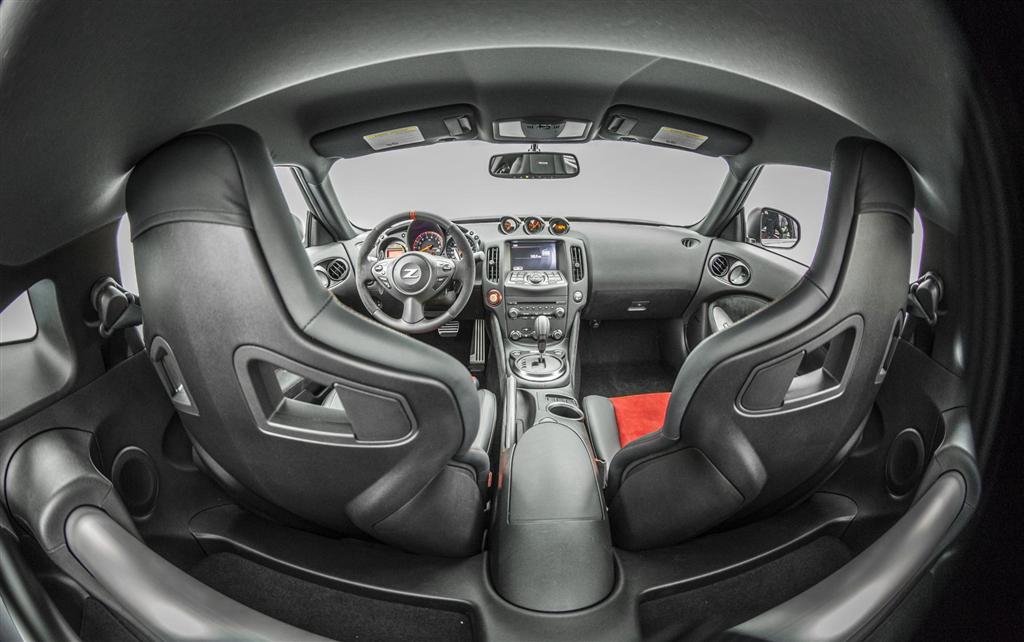 'NISMO is the heart and soul of Nissan performance, both for the track and on the street, so it's fitting that we are showing the dramatic new 2015 370Z NISMO for the first time at a gathering of our most loyal and enthusiast owners,' said Nissan Chief Planning Officer and Executive Vice President Andy Palmer. 'The new 370Z NISMO joins the recently introduced Nissan GT-R NISMO and Nissan JÚKE NISMO RS, giving performance fans a range of fresh, factory tuned NISMO models to enjoy.' 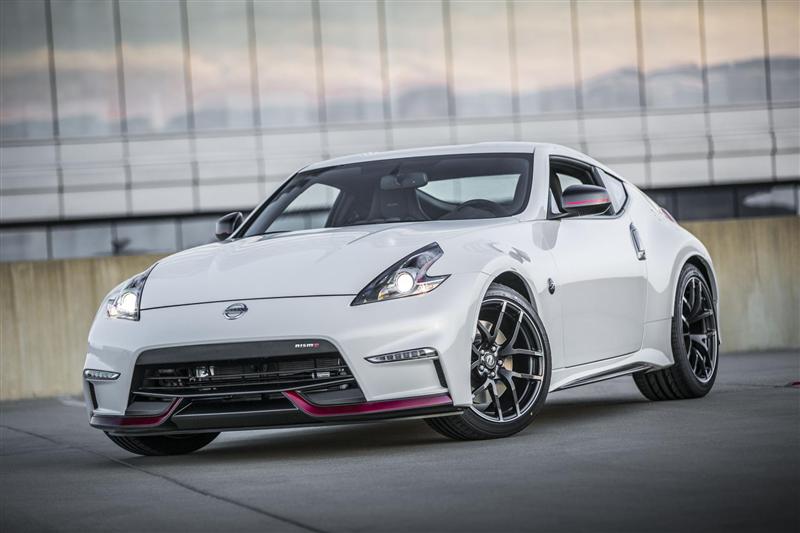 2015 Nissan 370Z NISMO
The most striking change for the 2015 370Z NISMO is its revised exterior design. Its GT-R-inspired functional and fully integrated aerodynamic body pieces have been redesigned to provide an aggressive and more aerodynamic new appearance – as well as optimizing front and rear downforce. Key changes include a new, deep front fascia with LED Hyper Daytime Running Lights, black headlight bezels, NISMO emblem and signature NISMO red stripe accent on the integrated front chin spoiler. The red accent continues down the redesigned side sills, on the black-color sideview mirrors and across the lower portion of the redesigned rear fascia. The unique NISMO rear spoiler has been reshaped and downsized.

The standard 19-inch NISMO super-lightweight forged aluminum-alloy wheels by RAYS also have been restyled for 2015 with a twin-five spoke design and a charcoal gray machine-finish (formerly silver).

Inside, the unique NISMO-styled interior is enhanced with redesigned black-and-red Recaro® leather-appointed seats with Alcantara® accents. The new seats, co-developed with Recaro®, are exclusively designed for the 370Z NISMO to provide more uniform body pressure and better all-direction holding during spirited acceleration, braking and cornering. They also play a key role in providing driving excitement by maximizing the harmony between driver and machine. The interior also features red seat trim and stitching with NISMO logo, an Alcantara®-appointed leather-wrapped steering wheel and NISMO red tachometer.

As in previous years, the 2015 370Z NISMO is powered by a potent 350-horsepower 3.7-liter DOHC V6 engine with Variable Valve Event and Lift Control (VVEL). The engine is matched with an exclusive, tuned H-configured exhaust system design, muffler tuning and an optimized calibration is installed to help create 18 horsepower more than a standard 370Z Coupe. Torque is rated at 276 lb-ft. 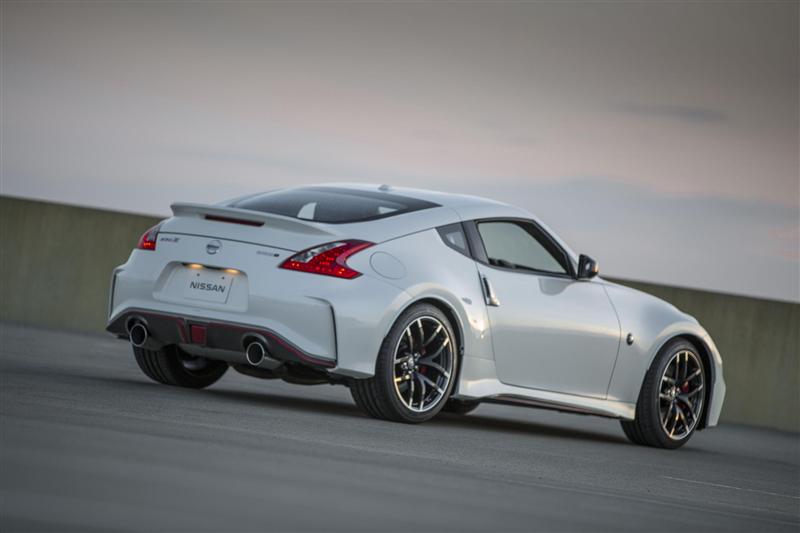 The 2015 370Z NISMO is offered in just four exterior colors – Solid Red, Magnetic Black, Brilliant Silver and Pearl White. It is set to go on sale at Nissan dealers nationwide in July 2014.

'There's much more to love about the 370Z NISMO than ever before – the new appearance inside and out, enhanced handling, new wheels, more technology and a choice of transmissions,' added Palmer. 'Our fans here at ZDAYZ want only the best and that's what this new 370Z NISMO delivers.'

About ZDAYZ
ZDayZ is an annual Z® car enthusiast gathering that takes place in various locations around the Únited States. Each year the event draws hundreds of Nissan Z, GT-R and other Nissan performance car enthusiasts from all over North America. This year's ZDayZ is being held May 15-19 at Fontana Village Resort in Fontana Dam, North Carolina. Activities include a car show, exhaust sound-off competition, 5/10K race, group dinners and multiple group mountain road drives.

About NISMO
NISMO, a short form of 'Nissan Motorsports International,' is the performance brand for Nissan, and is one of the company's purveyors of 'innovation that excites.' NISMO offers products featuring innovative technology and high performance to a wide range of customers for street use. NISMO cars provide an exciting driving experience with motorsports-inspired aerodynamics and styling, enhanced handling characteristics and unmatched agility. In the motorsports world, NISMO competes in the highest forms of GT and sports car racing, such as Japan's Super GT Series and the World Endurance Championships (WEC), as well as providing engines to teams that compete in the 24 Hours of Le Mans and the European Le Mans Series (ELMS). The Nissan GT-R captured the Super GT championship in 2011 and 2012.

About Nissan North America
In North America, Nissan's operations include automotive styling, engineering, consumer and corporate financing, sales and marketing, distribution and manufacturing. Nissan is dedicated to improving the environment under the Nissan Green Program and has been recognized as an ENERGY STAR® Partner of the Year in 2010, 2011, 2012 and 2013 by the Ú.S Environmental Protection Agency. More information on Nissan in North America and the complete line of Nissan and Infiniti vehicles can be found online at www.NissanÚSA.com and www.InfinitiÚSA.com, or visit the Americas media sites NissanNews.com and InfinitiNews.com. 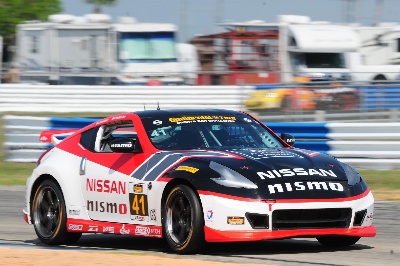 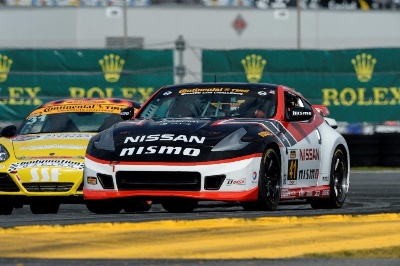 Sister Car Sets Fastest Lap of the Race Before Falling Back with Throttle Issue DAYTONA, Fla. – NISMO athlete and 2011 Nissan GT Academy champion Bryan Heitkotter was looking for a solid start to the 2015 season. With a new co-driver in... 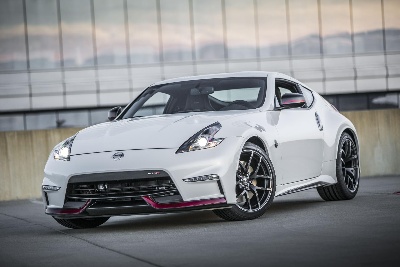 FONTANA DAM, North Carolina - Fans at the annual ZDayZ gathering in North Carolina had a world-class view of the Great Smokey Mountains, and were among the first to see the 2015 Nissan 370Z NISMO. This is the most amazing and most beautiful... 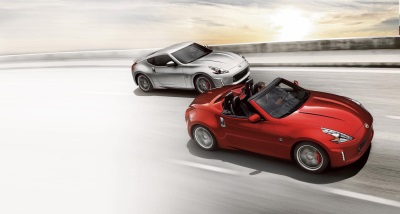 Nissans U.S. sales have significantly outperformed the industry in 2014, up 12.7 percent CYTD through June. Sales have been led by the recently redesigned Altima, Rogue and Sentra – along with other models such as LEAF (29.4), JUKE (44.9), Frontier...
© 1998-2020. All rights reserved. The material may not be published, broadcast, rewritten, or redistributed.