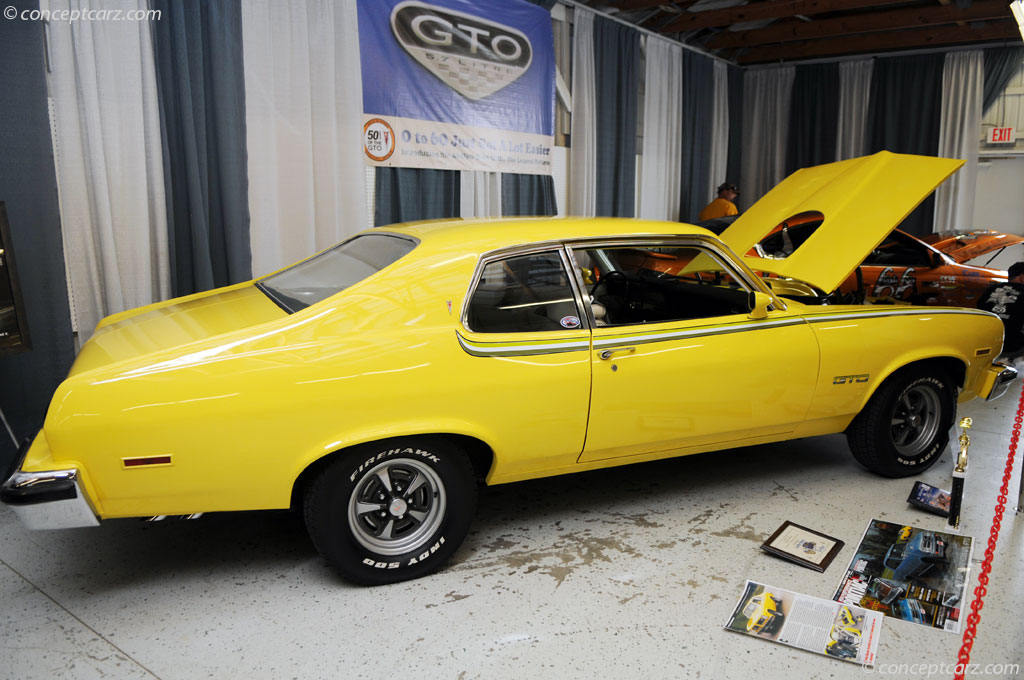 Production of the X-body Ventura II lasted from 1971 to 1977. The 'II' suffix was dropped after 1972, and the Phoenix name was added to the line in 1978. A three-speed with column-shift was standard. A four-speed manual and two-speed automatic was optional equipment on six-cylinder cars. Vehicles fitted with a V8 engine could be purchased with a three-speed Turbo Hydra-Matic.

For 1974, the Ventura saw only minor changes. The prior-year's Firebird-style grille was now used on all models in this line. Body styles included a coupe, sedan, and a hatchback. Standard equipment included armrests in both the front and rear, Deluxe two-spoke steering wheel, wood-grained door inserts, high/low ventilation, rubber floor covering, hubcaps, and vent windowless styling.

Buyers had the option of purchasing the Sprint and GTO packages. The Sprint option added black-textured grilles. The GTO package was now an exclusive package on the Ventura model line.

The base engine was a 250 cubic-inch six-cylinder engine rated at 100 horsepower. The base V8 engine displaced 350 cubic-inches and offered 155 horsepower.

After War broke out in the Middle East, the Organization of Petroleum Exporting Countries (OPEC) temporarily restricted the flow of oil to the West. As a result, gasoline became expensive as supply diminished. Consumers who were in the market for a new car turned their attention to smaller and more fuel-efficient vehicles. Pontiac, still clinging to the hope that the performance market was still attainable, continued to offer the GTO package.

The GTO package was moved from the Colonnade-style A-body to the compact X-platform of the Ventura for 1974. This shaved around 200 pounds off the weight of the vehicle and designers distinguished the GTO from its Ventura sibling line by adding GTO-specific trim and multi-color graphics, along with a shaker hood scoop.

The GTO was more than an appearance option; it was given an F41 heavy-duty suspension system, Rally II wheels, a Safe-T-Track differential, and power front disc brakes. The engine mounted under the hood was exclusive to the GTO package; it was a 350 cubic-inch V8 offering 200 horsepower.

The GTO came equipped with the floor shift, M11-coded Saginaw three-speed manual with a 2.54:1 first-gear ratio. The GTO's that were sent to California were given the mandated M38-coded Turbo Hydra-Matic 350.
by Daniel Vaughan | Jun 2014

Initially introduced in 1960 as an upscale version of the full-size Pontiac Catalina four-door Vista sedan and also the two-door hardtop, the Ventura was based on GMs B-body. The Ventura had exterior identification, a sport steering wheel, deluxe wheel covers, and distinctive tri-tone seats done in Morrokide which was Pontiacs leather-like vinyl upholstery. The Pontiac Venturas length for....
Continue Reading >>

This was the last year for the GTO and the first year on the Ventura. This example has 70,000 original miles and is finished in Code T sunstorm yellow with a black/red/white plaid interior. The engine is a stock 200 horsepower 350 cubic-inch 4-barrel....[continue reading]