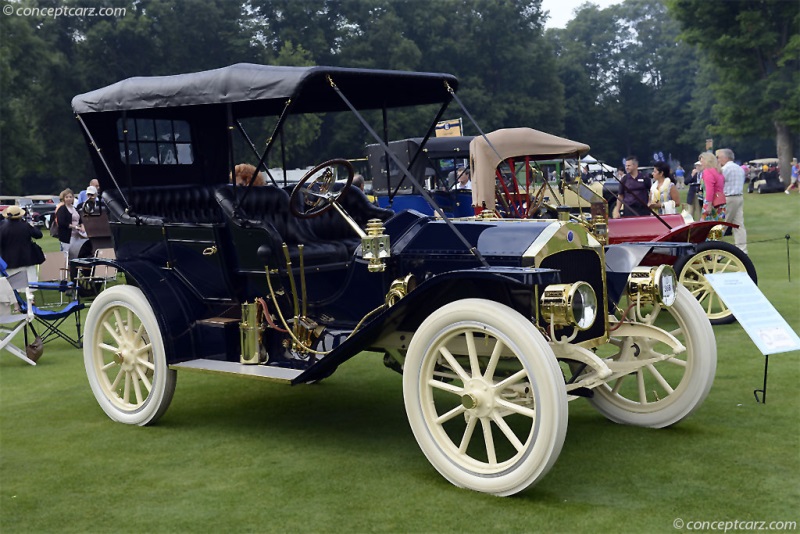 4-Passenger Tourer
The Alpena Motor Car Company is obscure today, but from 1910 to 1914 it was a going concern, with a high opinion of its own products. Alpena promotional literature stated flatly that its tourer represented 'the greatest value in a five-passenger car offered anywhere in America.' The organizers of the 1910 New York auto show listed the Alpena Flyer as one of the world's top 10 cars.Named for its northeast Michigan home, the 1911 Flyer was offered in touring and roadster models. The engine, with four cylinders cast in pairs, displaced 226 cubic inches and developed 35 hp. It was integrated with the three-speed transmission, which sent power to the rear axle via a torque tube.The Flyer sold for $1,450, at a time when a five -passenger Model T Ford touring car went for $760. Ford sold 69,762 cars in 1911, while Alpena sold fewer than 1,000 in during its entire run. Still, the company characterized its 1911 models as 'the greatest, biggest, and most sensational actual value in the entire world.'
The literature went on to describe the engine as 'troubleless, noiseless, speedy, and powerful.' But the Flyer came down to earth in 1914, brought low by a patent suit. Alpena lost in court, and the $400,000 fine forced the company into bankruptcy.
This car was put into Concours condition by Restorations Unlimited, of Cary, IL.
Many early automobile manufacturers who began production in certain towns, named their companies after that town. One such town was Alpena, Michigan, who offered Thomas F. Ahern ten acres of land and $50,000 in cash if he would bring automobile manufacturing to their town. Ahern was a mechanical engineer who was enticed by the deal. Ahern enlisted the help of a friend, Daniel D. Hanover, with establishing the Alpena Motor Car Company. In June of 1910, the Alpena Motor Car Company was established; a month later, it absorbed the defunct Wolverine Motor Car Company of Mt. Clemens, Michigan. By August, all materials and property were in Alpena facilities. During the first season, Daniel Hanover had become Alpena's president, but had to soon relinquish his position due to poor hills. Richard Collins of Alpena, Michigan, took over the presidential duties in late June of 1911.The 1911 Alpena Flyer was available as a 4- or 5-passenger Tourer, a Torpedo roadster, or a Fore-Door Tourer. A 112-inch wheelbase and four-cylinder engine was available. The same engine and platform would be used for the 1912 model year. Alpena introduced a 40 horsepower model for 1912, resting on a 120-inch platform. The following year, the wheelbase size rose to 124 inches with power reaching as high as 50 horsepower.
Production soon ended when the company filed for bankruptcy protection in February of 1914, with assets being purchased by the Besser Manufacturing Company.
By Daniel Vaughan | Aug 2014