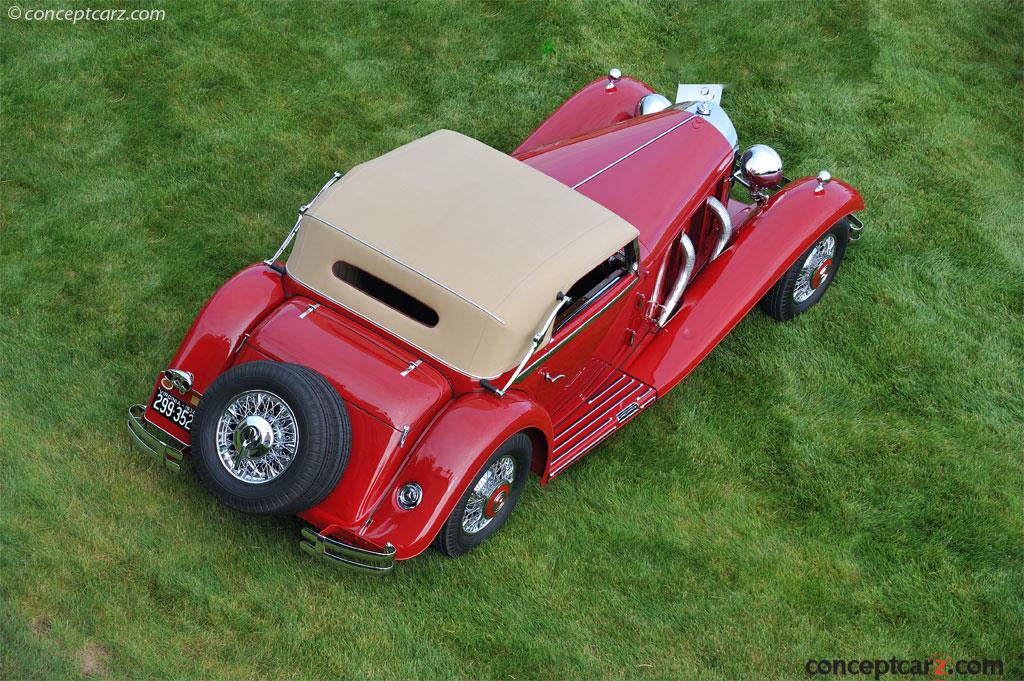 In June of 1926, Daimler and Benz merged, and among the assets gained to the resulting Daimler-Benz Company was Ferdinand Porsche, who had joined Daimler in 1923. Porsche used his talents, experience, and expertise to develop the Mercedes six-cylinder supercharged S series, creating the 6.7-liter S and forming the basis for its later SS, SSK, and SSKL evolutions.

Although Daimler-Benz's work forced included around 20,000 employees, its output was very limited, with production totaling roughly 2,000 cars a year. Their automobiles produced at the Mannheim factory were primarily mid-range, with a few custom-built luxury automobiles being constructed in Untertürkheim near Stuttgart. The Untertürkheim facility employed the best artisans and mechanics and used the highest quality materials to create the finest automobiles possible.

The first new product from the Daimler-Benz merger was the Model 380, introduced in 1933 and put on display at the 1934 Internationale Automobil-Ausstellung (more commonly known as the Berlin Auto Show.) It featured a fully independent suspension chassis with coil springs with the front suspension employing dual A-arms and the rear having swing axles. Power was from a single overhead camshaft supercharged straight-eight engine with a 3,820cc displacement. Despite its technical prowess, it was not up to the task of carrying the extravagant and elegant coachwork. It simply was incapable of providing adequate performance when fitted with the heavy coachwork. As a result, production ended barely a year after the model's introduction.

The inadequacies of the 380 were quickly resolved with the introduction of the W29 160 horsepower 500K, which re-introduced the 'K' Kompressor. Mercedes-Benz used a former Daimler facility near Untertürkheim at Sindelfingen to build a full line of eight coach-built bodies. They were well appointed with two spare wheels and tires, safety glass, tool kit, electric windshield wiper, hydraulic brakes, and lighted number plates. They also had a twelve-volt electric system, four-speed gearbox with synchromesh on the top three gears, and a central lubrication system. Each vehicle came with internal lighting, door locks, electric directional indicators, map pockets, and chromium-plated bumpers. Sedans received roll-up window blinds. The open cars had fitted top boots. All glass windows received safety glazing. To cater and customize to each customer's request, the cars could be optionally fitted with additional equipment and features.

The 500K had a swing-axle independent rear suspension layout created by Hans Nibel, who had started with Benz in the early years of the 20th Century, succeeded Marius Barbarou as chief engineer in 1904 and designed (as well as raced) the large Benz cars of the period, culminating in the 200hp 'Blitzen' Benz. With the merger with Mercedes, Nibel replaced Ferdinand Porsche and created a sophisticated chassis.

A common and distinguishable feature among the supercharged 500Ks was the bright plated outside exhaust pipes which emerged from the hood and snaked their way into the front fenders. These angelic pipes sang a high-pitched wail when the supercharger was engaged, drowning out all other sounds and heralding their presence.

Even when ladened with the finest and most luxurious bodies of the day, these 5,018cc supercharged straight-eight cars with the Roots-Type supercharger system were capable of 100 mph and were among the fastest production car on the road during its era. Zero-to-sixty mph was accomplished in a time of 16.5 seconds. The supercharger was engaged when pressing the accelerator pedal to the end of its travel, at the same time closing off the alternative atmospheric intake to the carburetor. It developed 100 horsepower in un-supercharged form or 160 bhp when the compressor was engaged. The gearbox was a four-speed with overdrive top ratio. There were servo-assisted hydraulic braking to keep the car in the driver's control.

These exclusive vehicles were produced in limited numbers, with 105 produced in 1934, 190 in 1935, and 59 in 1936. Just 342 examples were built from 1934 to 1936 before they were superseded by the 540K of which 419 were constructed. Most of the chassis received factory coachwork in various short- and long-wheelbase styles from Sindelfingen, but no more than 70 examples are known to have been delivered to custom coachbuilders. 56 examples were right-hand drive chassis sent to England, with eight of them as rolling chassis.
by Daniel Vaughan | Jun 2019

During the 1930s, the world was experiencing the Great Depression, yet this was also the time many automakers decided to introduce some of the most luxurious and elaborate vehicles. Cadillac introduced their V-16, followed by Marmon with an equally i....[continue reading]

In March of 1934, Mercedes-Benz introduced their 500K at the Internationale Automobil-Ausstellung, more commonly referred to as the Berlin Motor Show. It was produced alongside the 380 K and featured a fully independent suspension, an engine displaci....[continue reading]

In 1934 Rudolph Hess received this Mercedes as a gift from Adolph Hitler presumably to commemorate his being made Reich Minister of Germany. American GI - Link Milshark (Vienna, West Virginia) bought the car from a junk yard. His sergeant owned the c....[continue reading]

The 500K was largely attributed to engineer Hans Nibel and was first shown at the Berlin Auto Show in 1934. Production of the grand touring 2-passenger cabriolet continued through 1936 with a total of 33 produced, this being the only one with twin re....[continue reading]