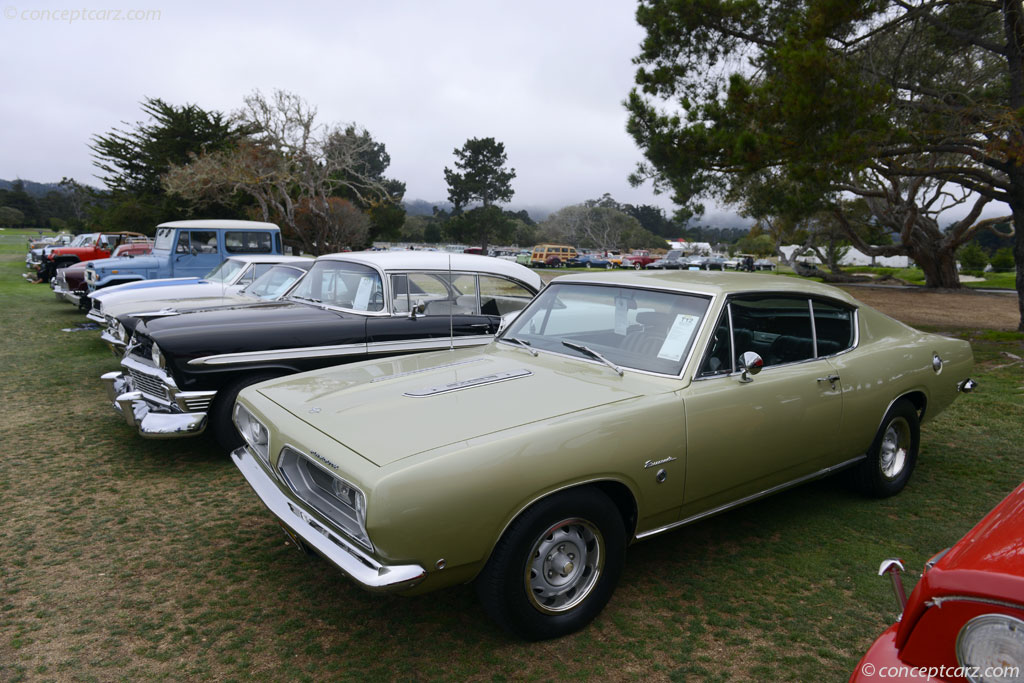 The Plymouth Barracuda was introduced in 1964 and based on the Chrysler A-body platform. It used the Valiant's 106-inch wheelbase and had an overall length of 188-inches. Its fastback styling was courtesy of Chrysler stylist Irv Ritchie and used the Valiant hood, windshield, vent windows, A-pillar, quarter panels, and headlamp bezels. Its unique rear window, created in collaboration with the Pittsburgh Plate Glass (PPG) and Chrysler designers, was completely new, along with the trunk. Its rear window was the largest ever installed on a standard production vehicle to that point.

The powertrain was borrowed from the Valiant, with two slant-6 six-cylinder engines, with a standard displacement of 170 cubic-inches and horsepower of 101 horsepower. The 225 CID engine boosted output to 145 bhp. The most potent powerplant installed in the Barracuda for 1964 was the all-new 273 CID V8 with two-barrel carburetion delivering 180 bhp.

The styling introduced in 1964 would continue through 1966. 1967 brought about all-new styling that would remain in production through 1969. Its wheelbase grew by two inches to 108-inches and it continued to share many of its components with the Valiant. A convertible and hardtop coupe body style joined the fastback. The 'Coke bottle' styling with side contours, S-curved roof pillars on the hardtop, wider wheel openings, and curved side glass was chiefly penned by John E. Herlitz and John Samsen.

1968 Plymouth Barracuda
The 1968 Plymouth Barracuda was available as a Hardtop or Fastback Coupe, or a Convertible. Just 2,840 examples of the convertible were built while 22,575 of the Fastback were constructed. Plymouth offered four new engine options including a 318, 340, or 383 cubic-inch V8. The base engine was either the 225-CID six or the 318-CID V8 mated to a three-speed manual transmission. The nameplates and the script were relocated to the cowl side front fender region. In the front was a vertical blade grille that replaced the former cross-hatch mesh unit. On the left-hand hood lip was the word Plymouth in block letters. In the back, the taillights were slightly changed and the rear deck panel was given a black-out treatment.

The third-generation of Barracuda styling was introduced in 1970 and built through 1974. Plymouth planned on introducing a new Barracuda for 1975, and two separate concepts were constructed out of clay, but due to the dramatically changing automotive market, the concepts never made it past the 'idea' stage.
by Daniel Vaughan | Jan 2015

The first series of the Barracuda was produced from 1964 through 1969, distinguished by its A-body construction. From 1970 through 1974 the second series was produced using an E-body construction. In 1964, Plymouth offered the Barracuda as an option of the Valiant model line, meaning it wore both the Valiant and Barracuda emblems. The base offering was a 225 cubic-inch six-cylinder engine that....
Continue Reading >>

This Plymouth Barracuda is a highly optioned V-8 car that has just 990 miles since the $50,000 restoration was completed. It has original panels, original interior, and just two owners from new. It also comes equipped with a vintage air conditioning ....[continue reading]