◾Third-generation Ford Focus RS will be available in major markets around the world and for the first time in the Únited States; Focus RS follows the reveal last month of the new Ford GT supercar – a new era of Ford performance that will deliver 12 new vehicles by 2020
◾All-new Ford Performance All-Wheel Drive with Dynamic Torque Vectoring Control paired with a powerful 2.3-liter EcoBoost® four-cylinder engine will provide impressive performance
◾Aggressive, functional design inside and out makes Focus RS the most powerful production Focus ever, with highly capable performance on both road and track
◾Professional rally driver and star of Gymkhana films Ken Block teamed with Ford as a consultant on development of Focus RSFeb 3, 2015 | Cologne, Germany -- Ford today revealed the all-new Focus RS, a high-performance road car that debuts Ford Performance All-Wheel Drive with Dynamic Torque Vectoring Control, which contributes to performance never before seen in a Focus RS. The all-new Focus RS is equipped with a new 2.3-liter EcoBoost® engine producing well in excess of 315 horsepower.

Focus RS is the latest unveiling in a new era of Ford performance that will bring more than 12 performance vehicles to global customers by 2020.

In addition to pleasing enthusiasts, these vehicles help deliver the company's One Ford plan for profitable growth, product excellence and innovation in every part of its business.

'The all-new Focus RS is a serious machine with high-performance technology and innovative engineering that sets a new benchmark for driving exhilaration on the road and track,' said Raj Nair, group vice president, Global Product Development, Ford Motor Company. 'The RS line has a proud history of technical breakthroughs that have migrated to mainstream Ford vehicles to benefit all of our customers, and the new Focus RS is no exception. It's a great example of our passion for innovation through performance, and creating vehicles that make people's hearts pound.'

Developed by a small team of global Ford Performance engineers, the new Focus RS is the third generation in the line, following models launched in 2002 and 2009. It will be the 30th car to wear the legendary RS badge, following such technology trendsetters as the 1970 Escort RS1600 with 16 valves, 1985 Sierra RS Cosworth with turbocharging and radical aerodynamics and 1992 Escort RS Cosworth with four-wheel drive.

The all-new Focus RS is the first-ever RS model that will be sold around the world, including the Únited States, and produced for all markets at Ford's Saarlouis, Germany, manufacturing plant beginning late this year.

Vital Stats
Engine : 2.3 L., 4-cylinder
Power: 315 hp
6-speed Manual
'We are acutely aware of the benchmarks we have set ourselves with RS performance models through the years, and rest assured this new car raises the game to a new level,' said Jim Farley, president, Ford of Europe, Middle East and Africa.

'Just as important is the fact that with technologies such as EcoBoost, we are able to demonstrate how an innovation that powers almost every car in our range can also be the heartbeat of our finest performance cars,' added Farley.

Gymkhana and World Rallycross star Ken Block was brought on as a consultant on the all-new Focus RS, and joined the Ford Performance team at the preview event in Cologne, Germany –where the RS legend was born with the Ford 15M RS in 1968.

The Ford Performance All-Wheel-Drive system is based on twin electronically controlled clutch packs on each side of the rear drive unit. These manage the car's front/rear torque split, and can control the side-to-side torque distribution on the rear axle – delivering the 'torque vectoring' capability that has a dramatic impact on handling and cornering stability.

The control unit in the rear drive unit continuously varies the front/rear and side-to-side torque distribution to suit the current driving situation, monitoring inputs from multiple vehicle sensors 100 times per second. A maximum of 70 percent of the drive torque can be diverted to the rear axle. Úp to 100 percent of available torque at the rear axle can be sent to each rear wheel.

During cornering, the rear drive unit pre-emptively diverts torque to the outer rear wheel immediately based on inputs such as steering wheel angle, lateral acceleration, yaw and speed. This torque transfer has the effect of 'driving' the car into the bend, achieving improved turn-in and stability, and virtually eliminating understeer.

The AWD system has been tuned to deliver exceptional grip – with lateral acceleration exceeding 1 g – and great cornering speed and acceleration out of a bend. With neutral and adjustable limit handling, and the ability to achieve controlled oversteer drifts at the track, Focus RS delivers an exceptional fun-to-drive experience.

To deliver optimum driving dynamics, the Ford Performance All-Wheel-Drive system was calibrated alongside the car's advanced Electronic Stability Control, in particular the brake-based Torque Vectoring Control system that works in parallel with the torque-vectoring AWD. Other exclusive chassis features include sports suspension with spring rates, bushings and antiroll bars – all of which are stiffer than those found in Focus ST, and two-mode switchable dampers, which offer a firmer setting for track driving. A carefully tuned electric power-assisted steering system working in combination with a more rigid front suspension knuckle design and shorter-link arms delivers connected and responsive steering with outstanding feel.

'The Focus ST and Fiesta ST showed that we can achieve sporty steering feel with an electric power-assisted steering system, and the RS raises the bar,' said Dave Pericak, director, Global Ford Performance. 'We set out to provide drivers with steering that is very direct, precise and well balanced – and the RS delivers.'

Ford engineers worked closely with Michelin to develop a choice of high-performance 235/35 R19 tires to complement the driving dynamics of the Focus RS: a standard Pilot Super Sport tire for every-day use, and – for the first time on an RS – an optional Pilot Sport Cup 2 tire for enhanced vehicle dynamics on the track.

Projected to produce well in excess of 315 horsepower, the custom unit shares its fundamental structure with the all-aluminum 2.3-liter four-cylinder engine in the all-new Mustang, but has been significantly upgraded through a comprehensive package of design changes.

Increased output is generated by a new low-inertia twin-scroll turbocharger with larger compressor that delivers significantly greater airflow, along with a much bigger intercooler to maximize charge density. Engine breathing is enhanced through a less restrictive intake design, and a large-bore high-performance exhaust system with an electronically controlled valve in the tailpipe that helps optimize the balance of back pressure and noise output.

Engine cooling also has been given the highest priority, with engineers creating additional space within the front of the vehicle to house a significantly larger radiator pack that provides the level of cooling demanded for hard circuit use.

Meticulous calibration work ensures that the power unit delivers excellent low-end responsiveness with a powerful mid-range pull, climbing to a free-revving top end up to a maximum rev limit of 6,800 rpm.

The six-speed manual transmission has been optimized for the enthusiast driver with a shorter gear lever to deliver faster and more accurate shifts. Both the transmission and the clutch have been upgraded with stronger components to cope with the engine's increased torque output.

High-performance design for stunning looks with optimum function
Focus RS exterior design is both dramatic and functional, with a more powerful and muscular character. Designers worked closely with Ford Performance to ensure that the necessary functional attributes were achieved, focusing on the aerodynamic downforce and balance delivered by the design, as well as the cooling demands of the powertrain and brakes.

RS features a powerful new front end appearance with a bold upper trapezoidal grille above the deep splitter, incorporating the largest possible apertures for engine cooling. A wide, muscular stance is emphasized by the lower wings and large outboard openings on each side of the car, which feed the brake cooling ducts and house vertically mounted lamps.

At the rear, the fascia panel is dominated by the exceptionally large diffuser, which optimizes airflow from under the vehicle and contains the twin round high-performance exhaust outlets. Focus RS for Europe and Asia markets will also get a clear central fog lamp. The distinctive rear roof spoiler is carefully integrated with the car's silhouette through body-colored side panels featuring a subtle embossed RS logo.

The dynamic side profile is emphasized by sculptured rocker panels, and the bold wheel lips that house a choice of multi-spoke 19-inch RS alloy wheels – including a high-performance lightweight forged design finished in low-gloss black, which offers enhanced strength and impact resistance.

The high-performance character of Focus RS is reflected inside the car, where heavily bolstered partial-leather Recaro sports seats serve as the centerpiece of the cockpit.

The interior features the reworked Focus control layout with its simpler, more intuitive design. SYNC connectivity provides access to audio, navigation, climate control and mobile phones via voice control, and via a high-definition, 8-inch color touch screen. SYNC can be specified with rear view camera with park distance control, as well as a Sony premium sound system with 10-speakers including a subwoofer.

The RS driving experience is reinforced by a new flat-bottomed steering wheel with a soft-feel leather-covered rim, alloy pedals and unique instrument graphics within the main cluster. An additional bank of gauges above the center console displays turbocharger boost pressure, oil temperature and oil pressure.

Rich heritage of innovation and performance
Since the first Ford RS models took to the road, the line has been an essential element of Ford's DNA, delivering technical innovation and performance on road and track. Dating back to the early days of Ford's success in Rallye Sport, the first RS models established a reputation for advanced technology and driving exhilaration that continues to this day.Source - Ford 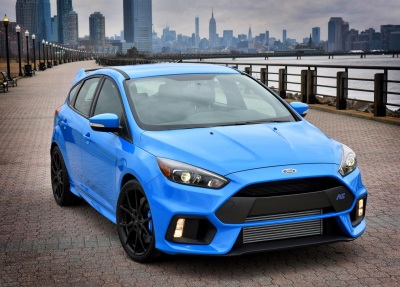 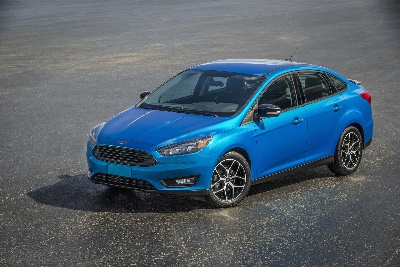 The Focus RS is now arriving at dealerships across the U.S. at a starting price of %2436,605, including destination and delivery Specially-designed 2.3-liter EcoBoost engine produces 350 horsepower an...