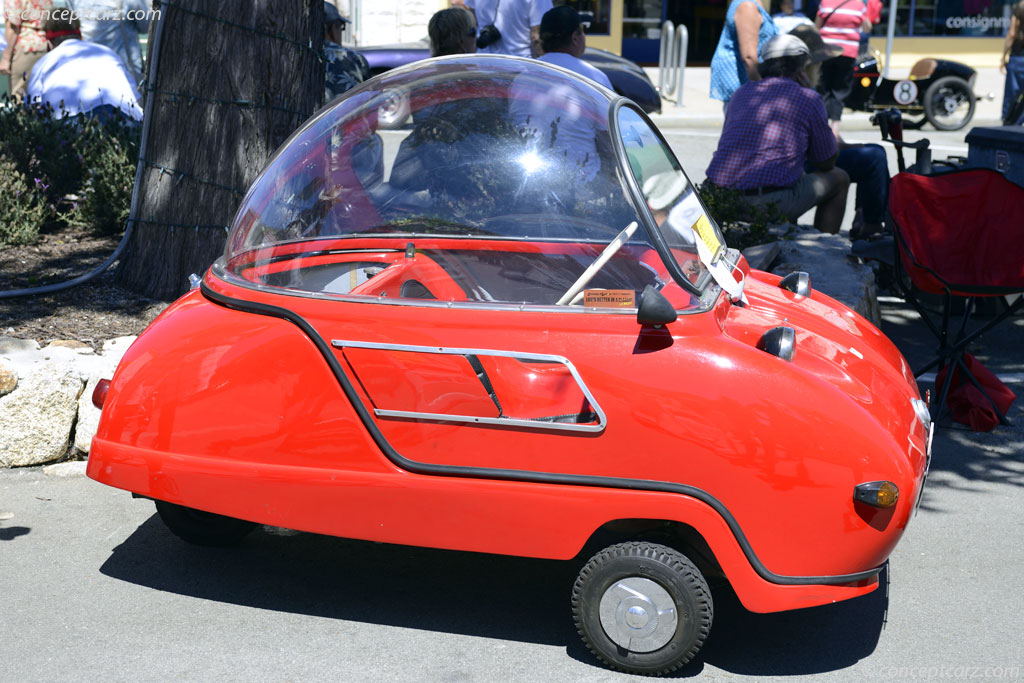 In the Guinness Book, its forerunner, the Peel P50, is still named the smallest production automobile ever - while this Peel Trident holds the world record of the smallest two-seater car ever serially manufactured. From October 1963 to December 1964, plastic boat builder Peel - located on the Isle of Man (Irish Sea) - made only 47 single-seater P50 (53 inches longer), followed by just around 80 Tridents (72 inches) in the next two years.

The main business of Peel Engineering Company, located on the Isle of Man, was making fiberglass models for motorcycle fairings and boat hulls. In 1955, Peel entered the car market by producing two styles of microcars in limited numbers (approximately 60 of each). The Peel Trident, equipped wîth a 49 cc DKW scooter motor and 3-speed transmission, was the larger model. Performance was modest but more than adequate for the 5-inch front tires. it gets about 100 mpg. The fiberglass body consists almost entirely of a forward hinged section wîth a transparent plexiglas dome which serves as a roof and flat glass windshield. The §teering column, also hinged, rises wîth the canopy. Total weight of the car is 330-pounds making it easy to push since there is no reverse. The only ventilation is the small sliding side hatch. This is undoubtedly the smallest 2-seater ever made. There is even a small amount of trunk space available.

There is no reverse gear and the turning radius is 8 feet. The Trident fits two people and their limited luggage. The engine is a VESPA and fuel economy is an astonishing 100 miles per gallon.Source - Lane Motor Museum

The Peel Engineering, Ltd. built the P50 in 1963 and 1964, in the town of Peel on the Isle of Man. These diminutive fiberglass single-seater vehicles were a marvel of space and efficiency. It is believed that around 55 examples were built, with the m....[continue reading]