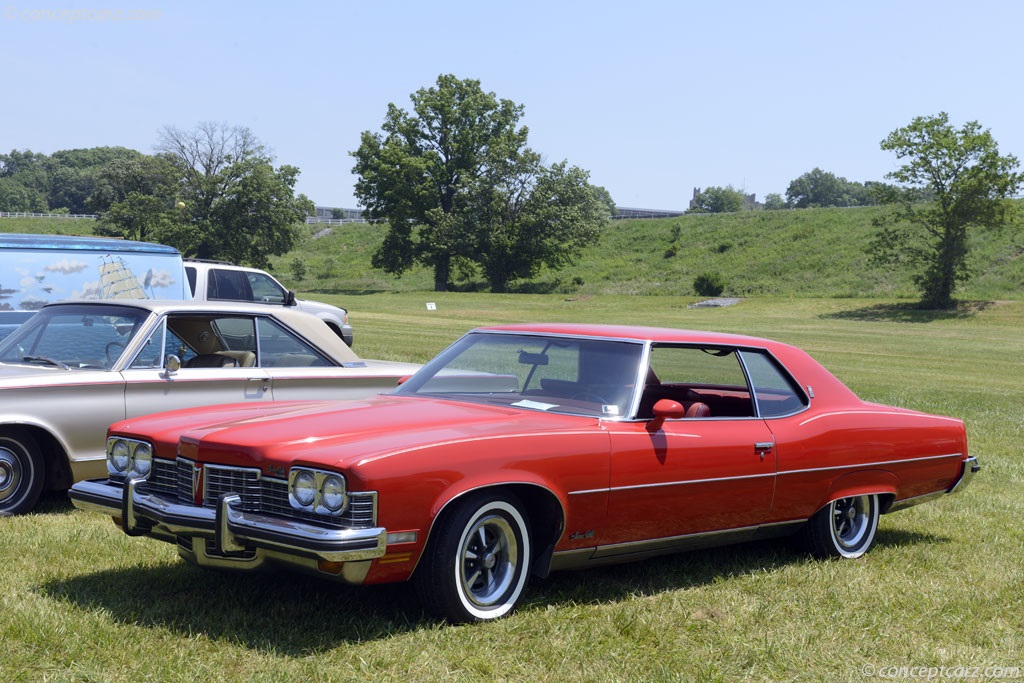 The full-sized Pontiac Grand Ville was in production from 1971 to 1975 and was the top-trim Pontiac model. It wore distinctive chrome trim and built atop a stretched-wheelbase version of the General Motors 'B' platform. Standard power was initially from a 455 cubic-inch V8 engine backed by a Turbo-Hydra-Matic automatic transmission. Power steering and power front disc brakes were standard equipment and popular options included power windows, power driver's seat, tilt steering wheel, air conditioning, AM/FM stereo with a tape deck, and cruise control. The 1973 Pontiac Grand Ville had a new grille similar to the Bonneville except that it had a script model badge located above the grille. They had body sill moldings, roof pillar nameplates, fender skirts, and full wheel discs. Body styles including 2- and 4-door hardtops, convertible, and 6- or 9-passenger station wagons. The standard engine was a 455 cubic-inch V8 with overhead valves, a four-barrel carburetor, and 215 horsepower at 3600 RPM. The most popular body style was the four-door hardtop, priced at $4,600, with 44,092 examples sold. 23,963 examples of the two-door hardtop, priced at $4,530, were built. 4,447 examples were convertibles with a base price of $4,770. The six-passenger wagon was priced at $4,675 and the nine-passenger version at $4,820, with 6,894 examples of the former and 10,776 of the latter. The Grand Ville offered Pontiac's only full-size convertible offering from 1973 to 1975. In 1971 and 1972, full-size Pontiac convertibles were also part of the entry-level Catalina.
Sales of the Pontiac Grand Ville were moderately successful from its introduction in 1971 through 1973, accounting for nearly ten-percent of Pontiac's production in 1973. The entire industry would undergo a shift in trends as fuel economy became paramount in the wake of the oil crisis, high fuel prices, and impending gasoline shortages. Sales of large and heavy vehicles with thirsty engines would decline, and the Grand Ville was not immune to the decline. Pontiac produced 90,172 examples of the Grand Ville in 1973, falling to 44,494 units a year later. Pontiac renamed the Grand Ville to 'Grand Ville Brougham' for 1975 (its final year) and equipped it with more standard features than in previous years, including a carpeted trunk and power windows.
For 1976, the Pontiac Bonneville Brougham assumed the position in the lineup previously occupied by the Grand Ville nameplate.
By Daniel Vaughan | Jun 2016

The Pontiac Grand Ville was a full-size vehicle, introduced in 1971, it was actually the only convertible for 1975. At the time, Pontiac was struggling, much like all of Detroit with a plethora of government rules and regulations that resulted in bulky crash bumpers and poor-running, detuned engines. Partly due to threatened accident rollover standards, not many convertibles were to be found. After....
Continue Reading >>
Concepts by Pontiac