The Paris Motor Show also provides the stage for BMW to present a new, exclusive version of its plug-in hybrid sports car: the limited-run BMW i8 Protonic Dark Silver Edition. Set to go into production this December, the special-edition BMW i8 will come in the exclusive Protonic Dark Silver paint finish. Following the successful launch of the first limited-edition i8 model, customers will now be given another opportunity to seal their membership of a select group within the BMW i8 community, and to tailor their car entirely to their own personal vision. Production of the BMW i8
Protonic Dark Silver Edition will begin in December 2016 at BMW Plant Leipzig. The order book will stay open for a limited period only – until the start of 2017.Source - BMW 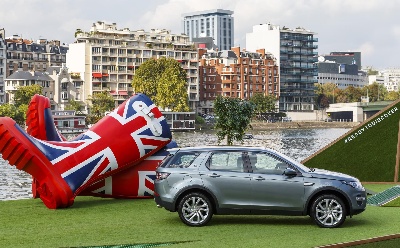 Land Rover Discovery Sport was dramatically unveiled on an 263-foot barge on the River Seine in central Paris Surprise appearance from supermodel and actress Rosie Huntington-Whiteley Unveil stunt...
© 1998-2020. All rights reserved. The material may not be published, broadcast, rewritten, or redistributed.