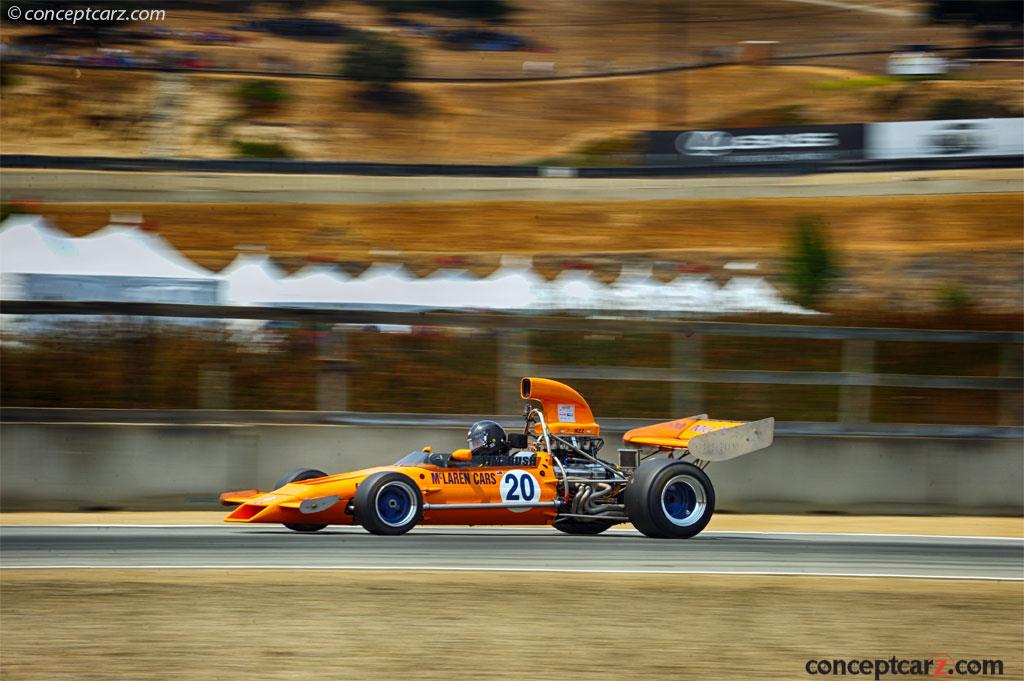 During the mid-1960s, there were several options for open wheel, single seat racing. However, they had either become too crowded or too expensive. So another racing formula was added. For the American market, the Sports Car Club of America modified their Formula A to allow for engine capacities up to five liters. This resulted in the Formula 5000 (5000 represented engine displacement) racing series which lasted from 1968 to 1982.

Bruce McLaren, a racer who was also technically competent, assembled a team of talented individuals to help with the racing endeavors, including Formula 1 and Can-Am. McLaren worked together with Robin Herd to design the Can-Am winning M6. Confident with Herd's abilities, McLaren tasked Herb with designing a new Formula 1 car for the team. Departing from the normal fully enclosed chassis design like the one used on the Lotus 49, Herd instead chose a bathtub style monocoque chassis. Rubber fuel tank bladders were placed on either side of the driver to help maintain a lower center of gravity and assist with forward and aft stability.

Unfortunately for McLaren, Herd was lured away by Coworth, leaving Bruce back in charge of the M7A project. Bruce continued Herd's overall design and tasked Gordon Coppuck to work on the car's suspension. The Can-Am series certainly influenced the M7A's design, being given a rather pointed nose and low profile oval shaped radiator opening for the high-speed venues. For courses like Monaco where cooling was of greater importance, a rounder, larger radiator was adapted in the nose. Mounted behind the driver was a 430 horsepower Cosworth V8 mated to a Hewland 5-speed manual gearbox. Ventilated disc brakes were located at all four wheels and steering was handled by a rack-and-pinion setup.

In just the car's third race, it would achieve victory in the Belgian Grand Prix with Bruce McLaren at the wheel. This would be followed up with Denny Hulme scoring back-to-back victories in the ninth and tenth rounds of the 1968 season.

McLaren's first Formula 5000 car was based on the successful M7A Formula 1 car. Perhaps the biggest changes Coppuck made were necessitated by the Chevrolet 5 liter V8 engine. It had an extended monocoque chassis and a sophisticated suspension setup and an aerodynamic body. The wheelbase measured 97.5 inches and the chassis was paneled in light-alloy sheet, bonded and riveted to fabricate steel bulkheads. Additional rear pontoons supported the engine and gearbox, in contrast to the F1 M7 design in which the DFV engine doubled as the load-bearing rear chassis structure.

In the front were wishbones and coil-over shocks. Lower wishbones, top links, twin radius rods and coil-overs were used in the back. Braking was handled by 12-inch diameter Lockheed discs.

The car was called the M10A and was built by Trojan. A total of seventeen examples were built and most were sent to American with just one staying in the United Kingdom and raced by Peter Gethin. Gethin would win the Guards 5000 Championship that year with the McLaren. The McLaren M10A won the SCCA national title in Formula A and dominated the first season of F5000 racing in Europe.

Next came the McLaren M10B, a further development of the M10A. A total of 24 examples were built in period. Among the changes were the engine being lowered into the chassis by two inches. Again, the McLaren won the European Formula 5000 championships.

McLaren replaced the M10B in 1972 with the M18. It did not achieve the same success as the prior models. Brian Redman drove the Works M18 during the 1972 season securing two victories from sixteen starts.

While the M22 was in development, a M18 was updated with an improved rear suspension and handed to David Hobbs to race in the Tasman series. It was called the M18/22. When the M22 was officially introduced, it was more of an updated M18 rather than being based on the M19 Formula 1 car. It had a McLaren F2 style nose, larger 13 inch rear wheels, and changes to the front suspension. By this point in history, McLaren was focusing on Formula 1, Indy and Can-Am. With little interest or support from the Works team, their partner Trojan stopped making F5000 cars late in 1972.
by Daniel Vaughan | May 2019
Vehicle Profiles

The M22 was largely an uprated M10B, with mainly suspension and steering geometry revisions, as well as a new nose. Development in F5000 had moved very fast and whilst the M22 McLaren looked absolutely gorgeous with its M19 F1 style air box and nose ....[continue reading]

McLaren and Formula One are truly synonymous. Over the course of its history, McLaren has completed 714 races and have garnered no less than 178 victories. But while McLaren and victory in Formula One...
© 1998-2020. All rights reserved. The material may not be published, broadcast, rewritten, or redistributed.