•ID. SPACE VIZZION is seventh concept built off the MEB platform
•Vehicle previews a potential production car for Europe and North America
•Super aerodynamic design has a drag coefficient of just 0.24
•Drivetrain has an 82 kWh battery, gives a range of up to 300 milesLos Angeles, CA — The Volkswagen ID. SPACE VIZZION electric concept combines the aerodynamic design of a Gran Turismo with the spaciousness and versatility of an SÚV. With an 82 kWH battery and an incredibly low drag coefficient of 0.24, the vehicle has a range of 590 kilometers on the WLTP cycle and a predicted range of up to 300 miles on the EPA cycle. The seventh member of the ID. concept family, the ID. SPACE VIZZION previews a potential production car for Europe and North America.The concept car is manufactured on Volkswagen's modular electric drive matrix (MEB), as are all ID. family models. This creates an entirely new package as the electric drive components are extremely compact and the battery is integrated into the vehicle floor to save space, making it possible to alter a vehicle's overall architecture. The concept car is fitted with a rear-mounted, 275-horsepower motor, but a second motor could be fitted to give all-wheel-drive capability and a total output of 355 hp. The ID. SPACE VIZZION is 195.2 inches long, 60.2 inches high, and 74.7 inches wide.Exterior Design

Since electric vehicles don't need a radiator or space for an engine, this creates new design freedom. In the case of the ID. SPACE VIZZION, the designers and engineers have taken advantage of this freedom to optimize the aerodynamics—in this case, to reduce the coefficient of drag (Cd) to 0.24—and thus increase the efficiency and range. Air flows under a horizontal panel between the headlights and over the extremely low hood, before being directed to the rear, where there is another horizontal panel over the tailgate that allows air to flow under it.The hood has a high-gloss black paint finish, appearing to blend into the tinted windshield and the black tilt-and-slide panoramic sunroof. This underscores the sporty design of the ID. SPACE VIZZION. The air also flows into ducts in the front bumper, where it is also directed rearwards. The vents in the bumper and the hood panel have been designed as functional features, but are also unique design elements.The lighting at the front is a definitive design feature. A slender white light strip extends out to the left and right of the illuminated white VW logo, reaching across the front end and into the fenders and side body. Visually, this strip continues intermittently to the rear end of the vehicle.The IQ.LIGHT LED matrix headlights are interactive, and feature lamp modules that are seamlessly integrated into the bumper. Additional honeycomb-style LED daytime running lights that are an ID. family design cue are located in the sides of the headlamp modules and in the bumper. On the outer side of the bumper, they also act as X-shaped turn signals. The vehicle features a small, black front splitter that blends into the side sills and the rear diffuser, helping to further optimize the aerodynamics.The extra focus on the aerodynamics also influences the design of the vehicle's side panels. There are no conventional door handles to interrupt the airflow. Instead, the ID. SPACE VIZZION features illuminated touch surfaces which light up as soon as the car's Keyless Advanced function detects someone approaching with a vehicle key or a synchronized mobile key on a smartphone. When the person makes contact with the touch-activated surface, the light pulsates, the touch pad vibrates, and the door opens.The light surfaces for opening the doors represent a continuation of the front light strip. In the lower section, the clean, seamlessly merged fender and door surfaces, as well as the design of the new 22-inch aluminum-alloy wheels, have a positive impact on the aerodynamics. The wheels, designed with five aero flaps in the style of a turbine, are flush with the wheelarches to avoid any interruption of the airflow.The visually striking tornado line is a gentle undercut, reflecting the precision of the design. The powerful shoulder section above it makes the car appear bolder and more dynamic. The roof is painted in a high-gloss black to contrast with the Saintly Blue Pearl Effect paint—a new metallic white with shimmering blue and violet pigments—and the lateral line of the roof features an aluminum appliqué, which will be a typical feature on many future ID. models.Form and function also create an aerodynamic alliance at the rear of the vehicle. One of the dominant elements is the roof spoiler, which spans the roof like a bridge and opens out at the bottom, allowing the air to flow both above and below the spoiler. This layout reduces turbulence and optimizes airflow.The roof spoiler, spoiler lip and diffuser work together to reduce turbulence at the rear end and help to optimize the vehicle's range. The transparent red light strip extends around the entire rear section and through the LED taillight clusters, which also double as X-shaped turn signals. In the upper part of the light strip, an illuminated red line to the left and right of the illuminated white VW logo continues the circumferential lighting.The concept car's broad trunk lid can be opened electrically. The Easy Open sensor-controlled feature can be operated via a touch-activated surface on the trunklid itself or by moving your foot under the rear of the car if your hands are full.All of the exterior lighting elements are activated when the driver opens the car. The VW logos at the front and rear light up white, followed by the light strips on the front section and silhouette which create a 360-degree flow in conjunction with the honeycomb lighting motifs. At the same time, additional honeycomb-style LEDs in the bumper generate a lighting effect. While this is going on, the illuminated red horizontal panel at the back is activated. Finally, a digital effect makes it look like the matrix headlights are opening like eyes. Conversely, a goodbye sequence is initiated as soon as the car is locked from the outside. 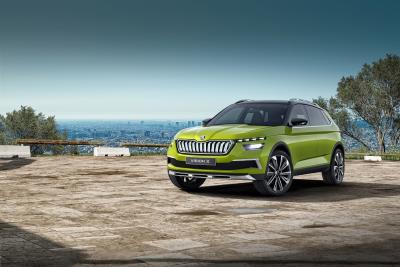