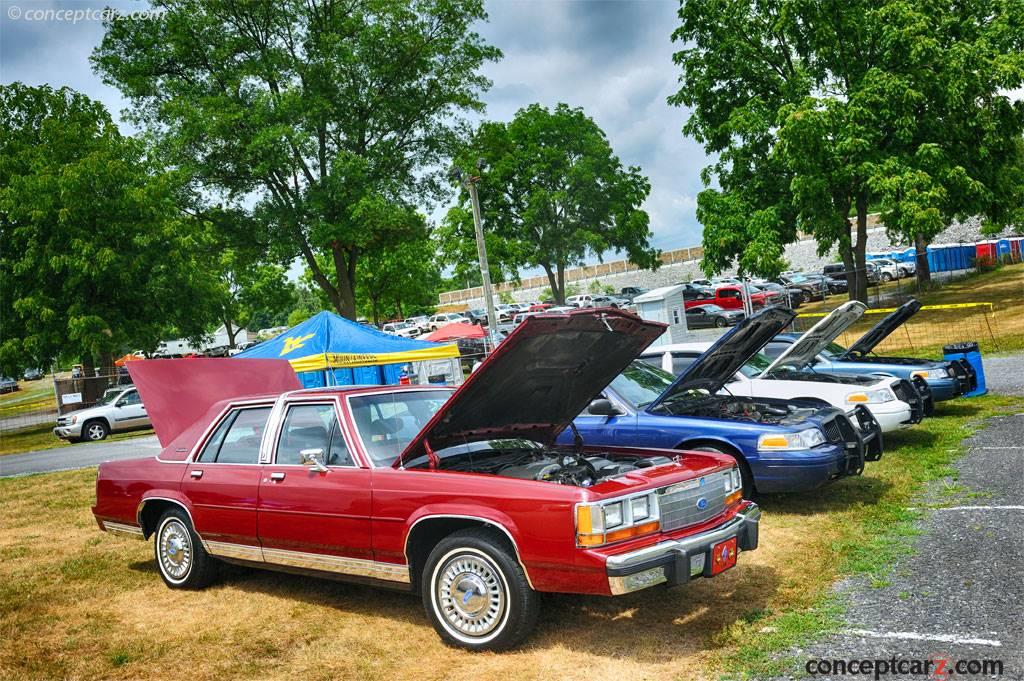 The Ford LTD Crown Victoria was introduced in 1980 as the company's flagship model and remained in production through 1991. Its Mercury counterpart during this time was the Grand Marquis. Body styles included a two- and four-door sedan, and a woodgrained Ford LTD Country Squire station wagon. It received a major restyling in 1988 including a new grille, bumpers, rub stripe, hood, and trunk lid. A new list of features became standard including a trip odometer, low fuel warning, oil-level warning, front-door map pockets, an automatic headlamp on/off system, and intermittent wipers. A new Insta-Clear heated windshield joined the options list. Trim levels included the base and LX models with both being powered by a 5.0-liter V8 engine with a cast-iron block and head, hydraulic valve lifters, and sequential (port) fuel injection. It delivered 150 horsepower at 3,200 RPM and 270 lbs-feet of torque at 2,000 RPM. It came standard with a four-speed overdrive automatic transmission. The new styling continued into 1989 with only minor changes. Standard equipment included an automatic headlamp on/off, tinted glass, and air conditioning. The former low-oil indicator was replaced by an engine-systems warning light. Body styles included a 4-door sedan and 'S' sedan, station wagon, and country squire wagon. The LX trim level did not have the 'S' Sedan.
The station wagon had a dual-hinged tailgate that opened both downwards like the tailgate of a pickup truck or swung open to the side. A dual side-facing jump seat in the cargo area was standard, as was the roof rack.
The S models were equipped with very features including a hood ornament delete, manual windows and locks, AM radio, vinyl bench seat, and a lack of chrome roof band. A non-padded vinyl roof was optional. These S models sold well as fleet vehicles particularly police and taxi services.The Ford Ltd Crown Victoria burst onto the scene in 1979 with 356,535 sales. This proved to be its peak year as sales declined for nearly every preceding year. 141,292 were sold in 1981 followed by 132,363 the following year. Sales rebounded in 1984 to 173,489, then 185,437 the following year. From here, sales shrunk to approximately 125,00 per year for the next three years. 1989 was one of the better years with 134,103 units sold. 77,395 were sold in 1990 followed by 82,433 in its final year. Following a major redesign, the LTD prefix was abandoned leaving the 'Crown Victoria' name to soldier on solo. The Country Squire wagon was discontinued as other means of family transportation became vogue, including minivans and later SUVs.
By Daniel Vaughan | Aug 2020

Today, the backbone of fleets, the Ford Crown Victoria is a vehicle for companies that need a rugged yet simple sedan with plenty of room for both passengers and cargo. Go back 30 years ago though, the full-size Ford was the backbone of the companys sales. During the 1973 model year an impressive 941,054 were sold. 25 years earlier, the Crown Vic was the only car that the division sold. Before that,....
Continue Reading >>