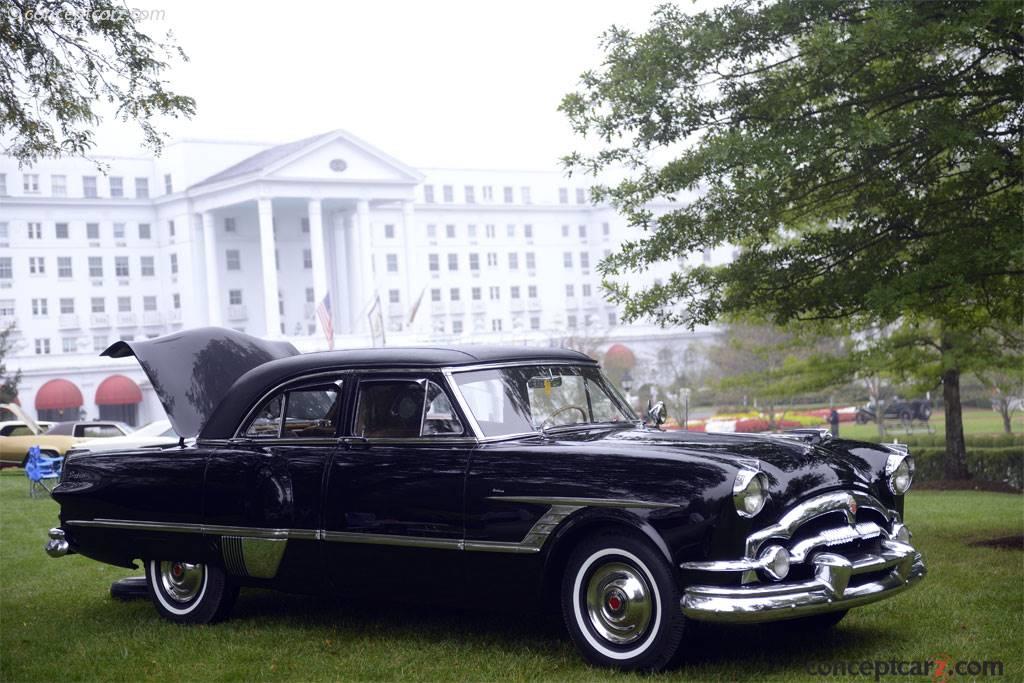 The Packard Patrician was in production for six years, from 1951 through 1956, and was built in the company's Detroit facilities on East Grand Boulevard. It replaced the Super 8 as the company's top-of-the-line model and distinguished itself from the other Packard models by its chrome trim, chrome ports on its rear fenders, and in 1952 it had four chrome ports. Both the Packard 300s and the Patricians wore a slightly revised grille with chrome 'teeth' in its oval area.

The Patrician 400 body styles included a four-door sedan lavishly equipped with the highest-grade upholstery and accouterments. An interior decorator named Dorothy Draper was hired for 1952 to infuse the Patrician with a fresh new look and color scheme. The car gained Wilton carpeting and hassock-style rear passenger footrests.

While most Packards rested on a 122-inch wheelbase, the Patrician rode upon a 127-inch wheelbase shared only with the 300 sedan. It had a list price of $3,660 making it the most expensive regular Packard offered. The total production for 1952 reached 3,975 units. Power was from an L-head, 327 cubic-inch inline eight-cylinder engine with hydraulic valve lifters, a WGD two-barrel carburetor, new timing chain, new vertical-type air cleaner, 45-ampere generator, and developed 155 horsepower at 3,600 RPM. For 1953, compression changed from 7.0:1 to 8.0:1, and horsepower rose to 180 hp. While other Packard engines had five main bearings while the Packard had nine bearings, giving it very smooth operation.

All of the nine-passenger Executive Sedans and Corporate Limousines were built on a chassis with 148-inches by Henney until 1954. A few Patrician Custom Formal Sedans with leather padded roofs, small backlights, and elaborate interiors were built by Derham in Rosemont.

Along with the larger wheelbase, the 1953 Patrician distinguished itself from other models by its manufacturer's name in script on the rear upper portion of the back fenders. It used the standard pelican/cormorant-type hood ornament, side molding treatment similar to the Cavaliers, and horizontal taillights. Standard equipment included trunk compartment light and robe rails, tilt-type rearview mirror, chrome wheel discs, twin visors and wipers, horn ring, and bumper guards.

Packard built 7,456 examples of the six-passenger Patrician, 25 Formal Sedans by Derham, one-hundred of the executive Corporate sedan by Henney, and fifty Corporate Limousines (also by Henney). The Sedan was priced at $3,740, the Derham Formal Sedan listed for $6,530, $6,900 for the executive sedan, and $7,100 for the corporate limousine.
by Daniel Vaughan | Sep 2020

The Packard Patrician was produced from 1951 through 1956. The first series was the Packard Patrician 400 produced from 1951 through 1952. The 400 was part of Packards numerical naming structure, with the 400 designating the highest trim level available on a Packard. The Packard 400 had extensive use of chrome trim. In comparison to the other Packard models of this era, it featured four chrome....
Continue Reading >>

In the fall of 1950 the John Reinhart-designed 24th Series Packard Patrician was debuted as the top-of-line Custom Eight replacement. From 1951 through 1954 the Patrician was built by the Packard Motor Car Company of Detroit, Michigan and from 1955 through 1956 it was built by the Studebaker-Packard Corporation of South Bend, Indiana. The model was constructed in Packards Detroit facilities on East....
Continue Reading >>

Currently in possession of its fourth owner, this Packard was originally ordered and built by a gentleman in New York int he construction business. Only 25 Packard Derham Limousines were scheduled to be built in 1953. This Derham was the only one pro....[continue reading]