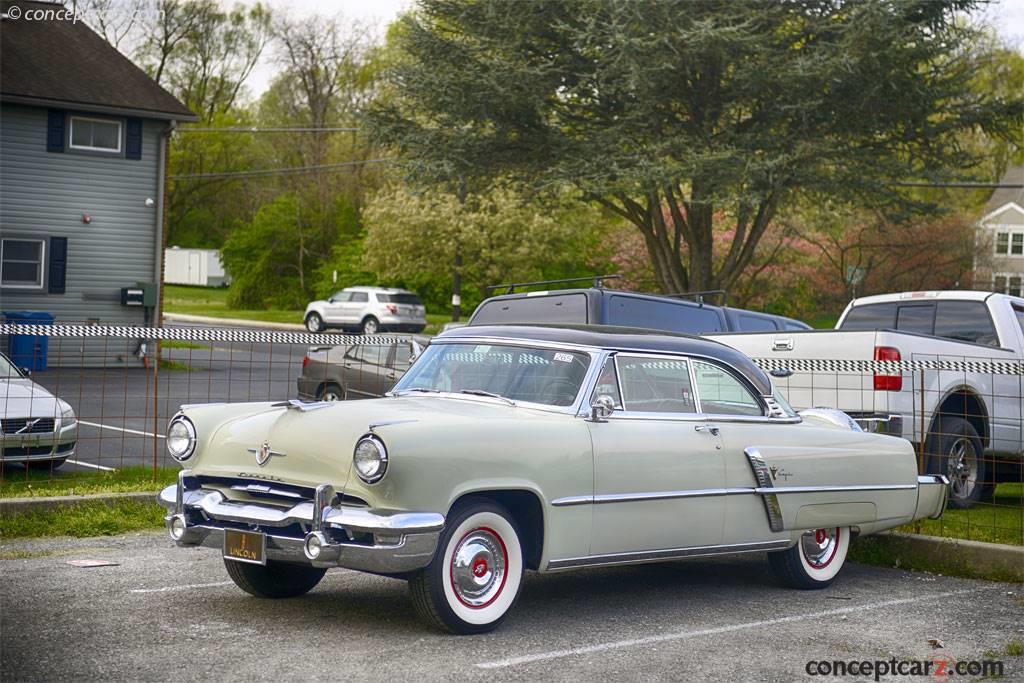 Following World War II, like most American cars, Lincoln resumed civilian automobile production with a mildly updated version of its pre-war product. The first postwar styling debuted in early 1948 as 1949 models with the top-of-the-line Continental being replaced by the Cosmopolitan. The 305 cubic-inch L-head V12 engine that had powered the first post-war Lincolns was replaced in 1949 by a 336.7 cubic-inch L-head V8 with 22 more horsepower and rated at 152 bhp at 3,600 RPM. A three-speed manual transmission was standard, and a 'Touch-O-Matic' overdrive was optional, joined later in the year by a Hydra-Matic automatic.Although Lincoln was perched at the top of the American luxury car segment, they were also endowed with performance, proven by their two victories (out of nine races) in the National Association for Stock Car Auto Racing (NASCAR) Grand National races in 1949. Minor styling updates, mostly in the addition or removal of trim, and changes to the grille were applied to the Lincolns in 1950 and 1951. A complete restyling occurred for 1952 with the addition of a new top-of-the-line model, called the Capri, joining the lower-priced Cosmopolitan. Both wore similar styling, distinguished by a fabric and leather upholstery in the Capri. Both were offered as a hardtop sport coupe and sedan, with the convertible body style being exclusive to the Capri.
The styling was clean and elegant, with a nearly full-length body spear that was intersected mid-way by a wide, slanted rear fender molding. The large vertical taillights were similar to the previous year, but the front-end styling was completely new, with an integrated bumper and grille arrangement. The bumper wrapped around the fender sides, reaching to the front tires. Above the bumper and grille were single round headlights flanking a Lincoln crest in the center. The wraparound theme continued to the windshield and complimented by the large wraparound rear window.
The styling introduced in 1952 continued through 1955. All-new styling was introduced for 1956 and was joined by a new 285 horsepower, 368 cubic-inch Lincoln Y-Block V8 engine with a four-barrel carburetor and 9:1 compression. Due to the growing popularity of power accessories, an all-new 12-volt electrical system was installed. Its reign as Lincoln's top-of-the-line model was over, however, as it moved downmarket and into Lincoln's entry-level model. The newly introduced Premiere now occupied the position previously held by the Capri. A third and final generation of styling was introduced in 1958 and continued into 1959. While the 1956 and 1957 Capri had rested on a 126-inch wheelbase and had a length of 223-inches (224.6 inches in 1957), the 1958 and 1959 Capri had a 131-inch wheelbase and a lenght of 229-inches (227.1-inches in 1959) making them among the largest production cars ever constructed.
By Daniel Vaughan | May 2021

The Lincoln Capri was powered by an eight-cylinder 430 cubic-inch engine which was matted to a three-speed automatic gearbox. The Life Magazine hailed the Capri as the safest vehicle produced in 1955. The Lincoln Capri was entered in the grueling Mexican Road Races and was able to sweep the top five places in the International Standard Class. The following year, they captured the first....
Continue Reading >>

Replacing the Cosmopolitan as Lincolns top of the line series, the Lincoln Capri debuted in 1952 with modern squared-off styling. Available in three body styles, the design was similar to the Mercury models at the time. A full-size model, the Capri rode on a 123.0-inch wheelbase, had an overall length of 214 inches, a width of 77.5 inches and a height of 62.6 inches. Designed to compete with the....
Continue Reading >>
Concepts by Lincoln

#Tbt: The Petersen Museum On The Thing

Welcome to #ThrowbackThursday, a new weekly series exploring the far reaches of Volkswagen history. Please enjoy this story on the Type 181 courtesy of the Petersen Museum. The first thing one might ask about this car is what is it The simple...