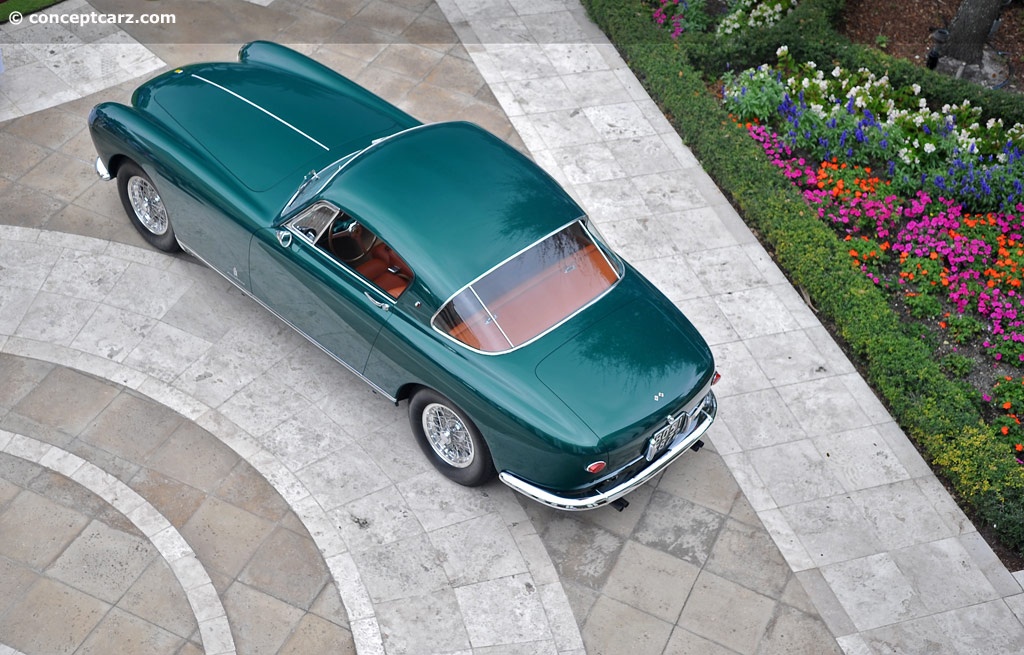 The 250 GT Europa was introduced alongside the 375 America at the 1953 Paris Auto Salon. This was the first road-going Ferrari identified by the 250 series nomenclature. This was also Ferrari's first true Gran Turismo. It was the only Ferrari 250 to be powered by the Aurelio Lampredi-designed V12 engine, which was originally designated for racing use. The engine produced over 200 horsepower and could carry the Europa to speeds of 135 mph with zero-to-sixty times of under 8 seconds.

Over a twelve-month period, Pinin Farina bodied only 17 Europas, 16 of them were coupes. Nearly every example was sent to the United States, but Charlie Chaplin, Princess de Réthy of Belgium, and Prince Bernhard of Holland each took delivery of one. Enzo Ferrari would later become an owner.

The 2,963cc V12 was a square engine, with a bore and stroke measuring 68mm, and was based on a design for the Formula One 3.3-liter engine. Equipped with three Weber 36DCF (or DCZ) carburetors, it developed nearly 200 horsepower at 6,300 RPM and was backed by a four-speed manual transmission. It was installed in a long 2,800mm (110.2 inc) wheelbase chassis that it shared with the 375 America and offered with three different rear axle ratios. The coachwork was handled by Pinin Farina and Vignale working off designs by Giovanni Michelotti. Of the twenty-two examples built, Pinin Farina built 17 coupes and a cabriolet, and Vignale built four coupes.

The Ferrari 250 Series
The 250 Series was Ferrari's most successful early line of vehicles, with production lasting from 1952 to 1964. They were built for road-going and sports car racing purposes and built on wheelbase sizes of 2,400 (94.5 inches) or 2,600 mm (102.4 inches), with most of the convertibles resting on the shorter platform. Nearly all of the 250 Series were equipped with the same Colombo Tipo 125 V12 engine that displaced 2,953cc, producing upwards of 300 horsepower in the ultimate configuration. Along with success in the salesroom, the Ferrari 250 racing cars earned numerous victories and helped establish an enviable reputation for reliability, durability, and performance.

The earliest 250 was the experimental 250 S Berlinetta prototype built for Giovanni Bracco and Alfonso Rolfo to contest the 1952 Mille Miglia. It used a 2,250 mm (88.6 inches) wheelbase with a 'Tuboscocca' tubular trellis frame and a suspension comprised of double wishbones at the front, with double longitudinal semi-elliptic springs locating the live axle at the rear. Stopping power was by drum brakes and steering was handled by a worm-and-sector setup.

250 Europa GT
The first of the road-going Ferrari GT cars was the 250 Europa. It was followed a year later by the 250 Europa GT, introduced in October of 1954 at the Paris Salon held at the Grand Palais. Unliked the Europa, the Europa GT came equipped with Colombo's 250 V12, making it the first road-going Ferrari equipped with this engine. It was also the first Ferrari to receive the Gran Turismo moniker. The Paris coupe wore coachwork by Pinin Farina and would be followed by other unique and custom creations before the 250 line became more standardized. The wet-sump V12 engine with 217 horsepower used three Weber 36 DCZ3 carburetors and was installed in a thoroughly redesigned Tipo 508 chassis with a 2,600mm (102.4-inch) wheelbase with a wider track and about 8-inches shorter than the previous model. Most significantly, the Europa GT benefitted from the independent coil-spring front suspension, a great improvement over the previous model's transverse front leaf-spring arrangement. The modern suspension and more manageable proportions delivered superior road holding characteristics, more precise handling, and greater stability at speed.

The 250 Europa GT did not create much commotion among journalists and the public due to its similar outward appearance to the preceding model. However, the new model was a meaningful step in the evolution of the legendary 250 Ferrari range. Its engine, in fact, was simply a slightly detuned version of the engine found in the race-winning 250 MM competition models. In comparison to the Lampredi engine, the Colombo unit was more powerful, weighed less, was better suited for road use and much less temperamental, easier to keep in tune, and took half the time to rebuild.

The engine was backed by a greatly improved gearbox, utilizing Porsche-type synchromesh on all four forward gears, allowing for fast, seamless shifting.

Nearly all of the Europa GT were exclusively tailored by Carrozzeria Pinin Farina and instrumental in defining the 'Ferrari look,' with elegant proportions, imposing egg-crate grille, and sporty lines. Although similar to the 250 Europa and 375 America, the compact sale of the chassis allowed for even more harmonious designs.

A total of thirty-four Europa GTs were constructed with the majority wearing coupe bodies created by Pinin Farina. Eight examples were competition cars with four receiving Berlinetta bodies similar to those of the 250 MM. The final Europa GT built wore a Scaglietti body.

Carrozzeria Vignale
During the early 1950s, Enzo Ferrari was seeking the right 'look' for his road-going cars and to that end, courted a number of different coachbuilders who provided not only Ferrari with a number of different styles to choose from but also the customer. Ferraris could be swathed with bodies by a variety of European, primarily Italian, coachbuilders, allowing clients to commission their car to their own unique taste.

Among the list of Ferrari coachbuilders was Carrozzeria Vignale of Turin, who opened their doors just one year after the conclusion of the Second World War. The company was founded by Alfredo Vignale, and his brothers, Guglielmo and Giuseppe, who crafted bodies for other manufacturers such as Cisitalia, Fiat, and Lancia, Vignale quickly earning a reputation for innovative designs and quality craftsmanship. Their reputation was taken to new heights when Vignale teamed up with Giovanni Michelotti and together they created a number of bold and impactful designs for Ferrari, all of which were handcrafted.

The Ferrari's clothed by Vignale coachwork are easily identifiable by their juxtaposition of sharp angles and rounded edges, with numerous air inlets, louvers, and other styling cues, including frequent use of two-tone paintwork. The first Ferrari to be clothed by Vignale was in 1950, the beginning of a relationship that lasted through 1954, with over 150 different coachbuilt bodies constructed during that time.

In the immediate years following World War II, the Pinin Farina built bodies for Cisitalia, Lancia, Alfa Romeo, and Nash Motors. Their association with Ferrari began in 1951, and soon, nearly all road-going production Ferrari wore Pininfarina designs. The relationship became so close that Pininfarina became a partner of Ferrari in 'Scuderia Ferrari SpA SEFAC', the organization that ran Ferrari's race team from 1961–1989.

The company name 'Pinin Farina' was changed in 1961 to Pininfarina.
by Daniel Vaughan | Apr 2009

This car, chassis number 0343 EU, was originally owned to Dr. Achille Stazzi of Milan, Italy. It left the factory finished in a two-tone grey. In the late 1950s, it was sent to the United States and sold to Wayne Sparling of Florida. It was sold in t....[continue reading]