2015 MAZDA3 NAMED TO ‘BEST FAMILY CARS OF 2015' LIST, AS CHOSEN BY PARENTS MAGAZINE AND EDMUNDS.COM 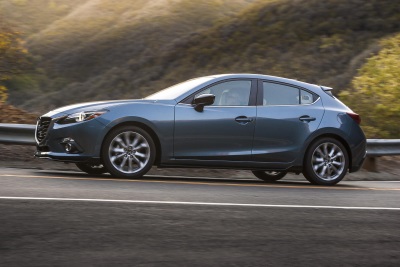 • Safety, style and reliability place Mazda3 among the top family cars
IRVINE, Calif. (June 3, 2015) – The 2015 Mazda3 has been named one of the '10 Best Family Cars of 2015' by Parents magazine and Edmunds.com. This marks the 16th accolade awarded to the Mazda3 this year. Safety and reliability are top priorities when evaluating vehicles for the top 10 list, so it is no surprise that Mazda3 is named one of the best family cars of 2015. Mazda3 sets the bar for standards of safety, having been awarded as a 2015 Top Safety Pick by the Insurance Institute for Highway Safety and earning the highest five-star overall safety rating from the National Highway Traffic Safety Administration. In November 2014, the 2015 Mazda3 received a Residual Value Award for the Compact Segment by ALG, a true testament of the quality, dependability, reliability and value of the vehicle. 'There is something special about making a car that gives the person behind the wheel peace of mind and confidence while transporting their loved ones,' said Jim O'Sullivan president and CEO, Mazda North American Operations (MNAO). 'Our advanced technology features such as the Smart City Braking and the Lane Departure Warning System are the perfect safety companions to the fun-to-drive Mazda3.' Starting at $16,945 MSRP, Mazda3 features SKYACTIV® TECHNOLOGY, 'KODO—Soul of Motion' design and features such as i-ELOOP (which enhances fuel economy), MAZDA CONNECT (infotainment) and i-ACTIVSENSE (safety). This award-winning vehicle is one of the most fuel-efficient vehicles in its class, available in four- and five-door configurations and offered with either a SKYACTIV-G 2.0-liter or 2.5-liter engine. Both six-speed manual and automatic transmissions also are available. Additional information about the award can be found at http://www.parents.com/parenting/money/car-buying/best-family-cars/. Mazda North American Operations is headquartered in Irvine, Calif., and oversees the sales, marketing, parts and customer service support of Mazda vehicles in the United States and Mexico through nearly 700 dealers. Operations in Mexico are managed by Mazda Motor de Mexico in Mexico City. For more information on Mazda vehicles, including photography and B-roll, please visit the online Mazda media center at www.mazdausamedia.com. For further information: Contact: Jacob Brown, Mazda North American Operations, (949) 727-6751 Eric Booth, Mazda North American Operations, (949) 727-6144
Photo credit: Mazda
posted on conceptcarz.com
Loading...