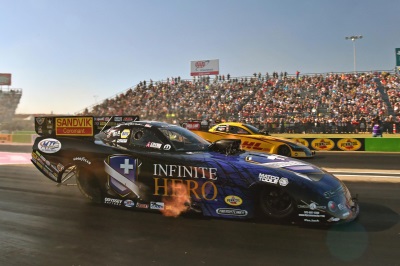 ◾Jack Beckman drives 2015 Mopar Dodge Charger R/T to his ninth final elimination round of the season for a runner-up finish at 30th annual AAA Texas NHRA FallNationals ◾Beckman remains second in hunt for Funny Car championship and is less than two rounds behind points leader ◾All four DSR Mopars re-shuffle their positions in the top-five with two 'NHRA 'Countdown to the Championship' national events left ◾Allen Johnson takes Magneti Marelli HEMI-powered Dodge Dart to third semifinal of the Countdown at Texas Motorplex and moves up to fourth in points October 18, 2015 , Ennis, Texas - Don Schumacher Racing (DSR) driver Jack Beckman drove the Infinite Hero 2015 Dodge Charger R/T Funny Car to his ninth final elimination round appearance of the season for a runner-up finish against points leader Del Worsham at Texas Motorplex for the 30th anniversary edition of the AAA Texas National Hot Rod Association (NHRA) FallNationals, the fourth of six 'Countdown to the Championship' playoff events. With the result, Beckman remains second in the hunt for the Funny Car world championship crown and is within 38 points of the lead with two playoff events remaining.
After qualifying second and earning round wins over Tony Pedregon, John Force, and DSR teammate Tommy Johnson Jr., Beckman advanced to the final elimination battle against No. 1 qualifier Worsham. The Mopar left first and posted an elapsed time run of 4.077 seconds at 286.25 miles per hour in a close contest that unfortunately saw Beckman beaten by his competitor's 4.041 second / 272.17 mph pass.
'It stings to lose one that close,' said Beckman. 'It's one of those races that I'd like to watch at home with the replay. The car was trucking along and then spun the tires and hunted for the wall, but it was far enough down track to just keep the throttle down, hang on and hope it's enough. Talking to Del (Worsham) after the race, he was having more problems in his lane and had to step off of it. Had we lost in the final to anybody but Del, we would've left here with the points lead.' Worsham earned the Countdown points lead by scoring all three of his season wins in the playoffs against DSR drivers Beckman, Johnson Jr. and Matt Hagan. Beckman, who won the national title at previous playoff event in Reading, Pennsylvania, is looking to be perfect for the remaining races in the hopes of scoring a second Funny Car world title. 'We're probably going to have to go do that at the next two races and get eight round wins,' added Beckman who has a career-best seven wins to his credit this season to date. 'I think if you look at what we've done this year, the Infinite Hero team is capable of doing that. We were six rounds out before and now we're less than two rounds out so we're still in a decent position with two races left. I think we're going to content all the way to the final elimination round at Pomona.' Trending News
Photo credit: Mopar
posted on conceptcarz.com
Loading...
Loading...
Loading...
Loading...
Loading...
Loading...
Loading...