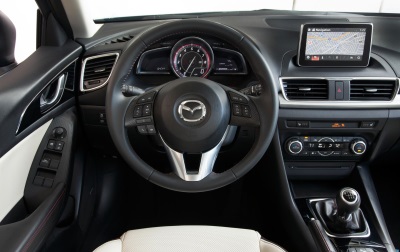 IRVINE, Calif. (May 25, 2016) – The 2016 Mazda3 topped the list of the 10 Coolest Cars Under $18,000 of 2016 by the editors at Kelley Blue Book's KBB.com for the third consecutive year. Mazda3 has been named to the list every year of the vehicle's 13-year existence. Two longstanding criteria—fun-to-drive and fun-to-own—are critical among the deciding factors of what the KBB.com editors freely admit is a very subjective 'cool factor,' the over-arching No. 1 criterion for a vehicle to place on this list. Starting at $17,8451 MSRP, Mazda3 features SKYACTIV® TECHNOLOGY, 'KODO—Soul of Motion' design and features such as i-ELOOP (which enhances fuel economy), MAZDA CONNECT (infotainment) and i-ACTIVSENSE (safety). This award-winning vehicle is one of the most fuel-efficient vehicles in its class, available in four- and five-door configurations and offered with either a SKYACTIV-G 2.0-liter or 2.5-liter engine. Both six-speed manual and automatic transmissions also are available. Mazda North American Operations is proud of its award-winning vehicle lineup. The 2016 model year vehicles have already earned over 100 industry accolades with a recent impressive win from the 2016 MX-5 with two awards for Word Car of the Year and World Car Design of the Year. To learn more about Mazda, visit www.mazdausamedia.com. 1 Starting price is manufacturer's suggested retail price (MSRP) for lowest trim level. MSRP does not include $835 destination charge (Alaska $880), title, taxes, license, options and dealer charges. Actual prices set by dealer and may vary.
Photo credit: Mazda
posted on conceptcarz.com
Loading...