August 12, 2019 by Lamborghini
Sant'Agata Bolognese, 12 August 2019 – The Pebble Beach Concours d'Elegance, established in 1950, is the one of the most renowned classic car shows in the world, and every year the selection of cars for display is very severe, because only the best ones can be accepted to win this privilege. For the 59th edition, that will take place on Sunday, August 18th, 2019 only five Lamborghini Miura have been accepted as part of a dedicated class: The Lamborghini Miura class, celebrating the most iconic GT of the 1960s. Among the five cars, entered from all over the world, all with an interesting and exceptional history, three have been restored by Lamborghini Polo Storico in Sant'Agata Bolognese. Each Miura is a perfect symbol of a magic period, when less rules lead to more freedom for technicians and car designers. The Miura is the result of the dreams of a young group of technicians, the eldest was 27 years old, as Engineers Giampaolo Dallara and Paolo Stanzani backed by a visionary entrepreneur as Ferruccio Lamborghini, and the Bertone firm youngest designer, 22 years old Marcello Gandini. The Miura had its world premiere at the 1966 Geneva Motor Show and can be considered as the first super sports car of modern imprint. Equipped with a transversally mounted 4 liter V12 mid-engine with 4 overhead cams it was the fastest production car of that period. Each one of the 763 Miura originally manufactured from 1966 to 1973 in Sant'Agata Bolognese are today considered among the most desirable classic cars to be owned and to be driven.

The five Miura that will be shown in Pebble Beach 2019 1967 Miura P400, owned by Tom & Gwen Price, Belvedere, CA, USA, chassis #3087, the 22nd built of the original production series of 25. It was delivered new to Swiss racing driver Karl Foitek in June 1967, through his sports car dealership in Zurich. He owned it until 1972 and sold it to John Middleton of Lake Forest, Illinois, who kept the ownership for the following 40 years. The 3rd owner had the car restored by a Lamborghini expert in the USA and its current owner bought the car in October 2018.

1968 Miura P400 owned by Jon & Kim Shirley, Medina, WA, USA, chassis #3303, is the 101st Miura P400 built, finished in February 1968 and immediately delivered to its first owner, the Shah of Iran, Mohammad Reza Pahlavi. This P400 was specially ordered with a chrome plated front bumper, a special steering wheel and several other cosmetic changes. Famously, the Shah took delivery of the Miura, equipped with special stud tires, in the snow at his home in St. Moritz. The Shah sold this Miura just before his downfall during the Iranian revolution of 1979, and the car was then confiscated by Ayatollah Khomeini's government before being smuggled out of the country. It was then owned by the Shah's son for the next 30 years. A full restoration was undertaken during 2018 and the current owner bought it at the beginning of 2019.
1968 Miura P400 owned by The Kaiser Collection, Vaduz, Liechtenstein, chassis #3586, is a real movie star, being the one used, driven by actor Rossano Brazzi, in the opening scene of Michael Cain film The Italian Job, released June 2nd, 1969. Chassis #3586 was chosen by the Paramount production executives to match the color of a badly damaged Miura that was also used for the movie's infamous 'crushing' scene. Once filming was completed, the surviving Miura was returned to the factory and subsequently delivered, via the Italian Lamborghini dealer Zani, to its first Italian owner on the 2nd July 1968. After being in collections in Italy, Japan and the UK, has been certified as the car of the movie and restored by Lamborghini Polo Storico in 2019.
1972 Miura P400 SV owned by Jean Todt, Paris, France, chassis #3673, one of the 150 Miura SV manufactured. The car wears a 1968 chassis number, of a totaled and dismantled P400, as for the request of its first owner, Captain Arthur Mechin, a former RAF pilot living in South Africa, willing to skip the cost of import duty of a new car. Delivered in November 1972, one of the last Miura assembled, it spent nearly 30 years in South Africa before being sold in the USA in 2001. Bought by its current owner, legendary rally driver, Ferrari Formula One team boss, and President of the FIA, Mr. Jean Todt, in 2016, it has been completely restored by Lamborghini Polo Storico in 2018.

1968/1975 Miura SVR owned by Shinji Takei, Japan, chassis #3781, is a one-off built by the factory in Sant'Agata Bolognese in 1975. This car began life as a Miura S and was first shown at the 1968 Turin Motor Show before being sold in Italy. In 1974, it was bought, as used, in Germany by Heinz Steber, who returned it to the factory asking them to build him a very special 'racing' Miura. By 1975, after 18 months of work, Steber drove the car for a while, before selling it to a Japanese collector. Remained in Japanese ownership ever since, in 2016 has been purchased by the current owner, who entrusted Lamborghini Polo Storico of a complete restoration to return the car exactly as delivered in 1975. Lamborghini Polo Storico, inaugurated in 2015, is Automobili Lamborghini's department dedicated to preserving the heritage of the House of Sant'Agata Bolognese. Its activities include the restoration and certification of all Lamborghinis produced up to 2001, as well as the reconstruction of spare parts for classic Lamborghinis, for which more than 200 new code numbers were introduced in 2018 alone. Polo Storico also conserves and manages the company archives to support the conservation and preservation of all classic Lamborghini cars. 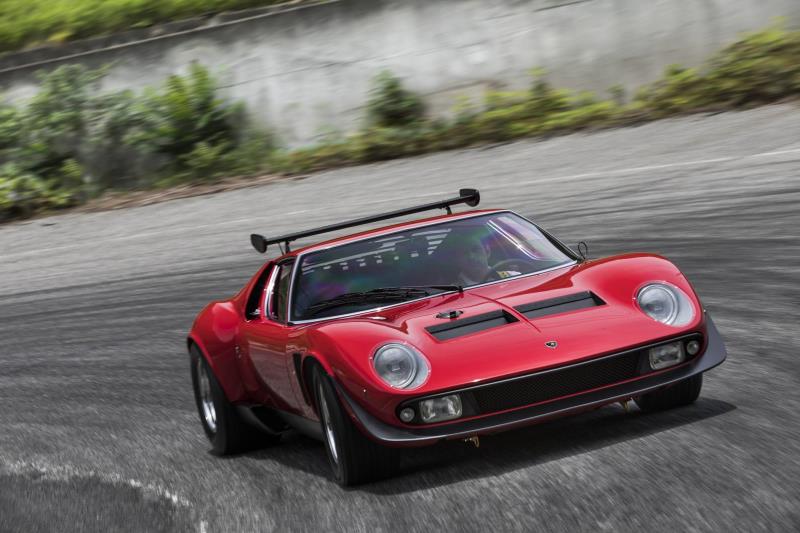 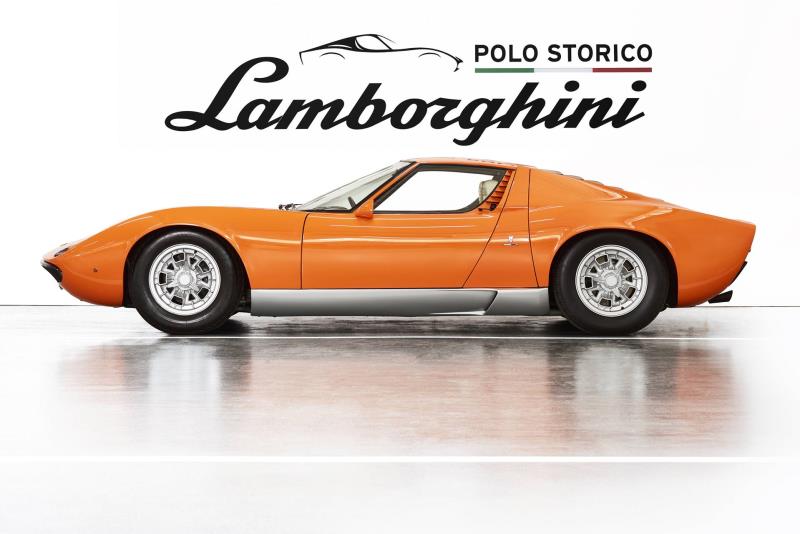 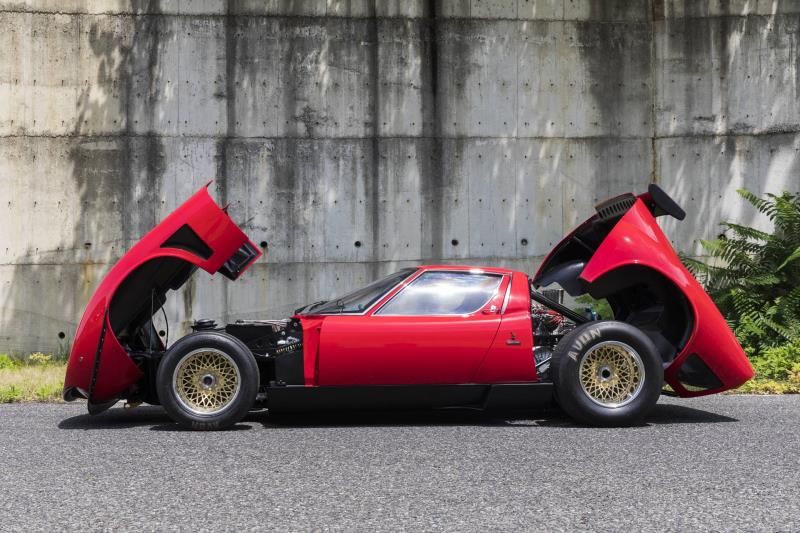 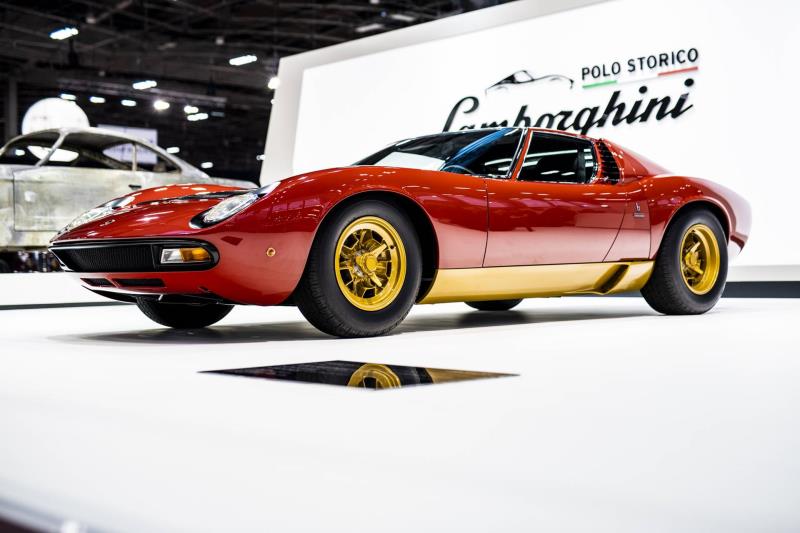