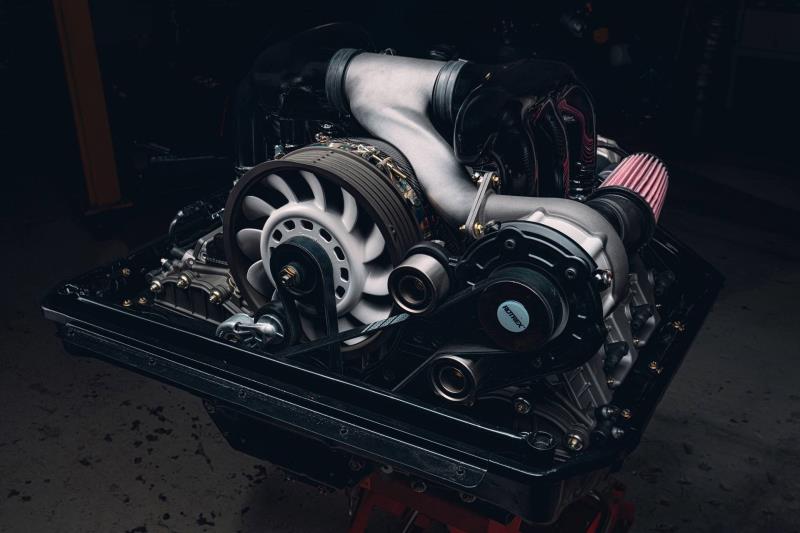 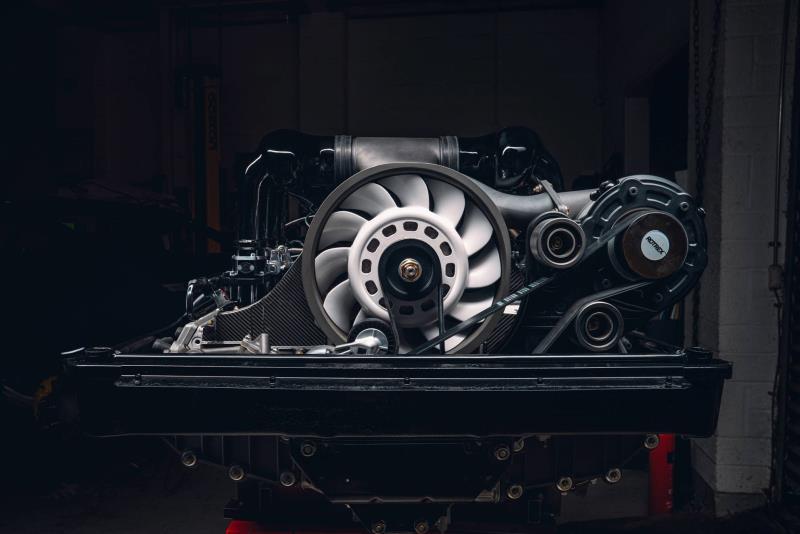 •All Theon's unique engines are fully rebuilt, the finished units dressed with a bespoke carbon fibre engine shroud and aesthetically-optimised engine bay •Media images: https://bit.ly/Theon_Supercharged
•https://theondesign.com
Theon Design today gives a tantalising glimpse of its next bespoke Porsche 964-based commission with a first look at the car's beating heart: a 450bhp supercharged version of the famous air-cooled flat-six. 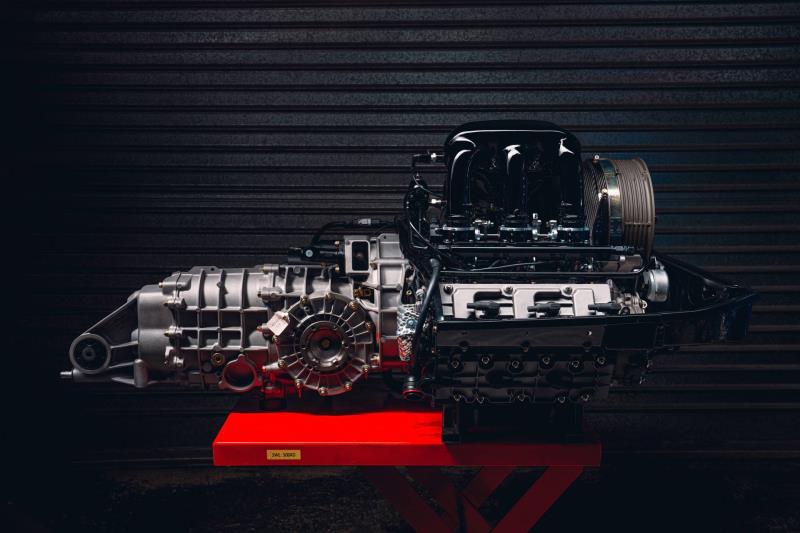 This remarkable 3.6-litre engine – the first supercharged unit Theon Design has created for one of its discerning customers – wholly represents the company's core philosophy of respecting Porsche's engineering ethos but enhancing performance through the sympathetic application of contemporary design and engineering techniques. 'It's what we refer to as OEM+,' explains Theon Design founder Adam Hawley. 'With obsessive attention to detail and state-of-the-art technology, we elevate the Porsche 911 experience to another level for our customers, applying that approach to every part of the car from the exterior to the interior and the engine – the very heart of the car.' 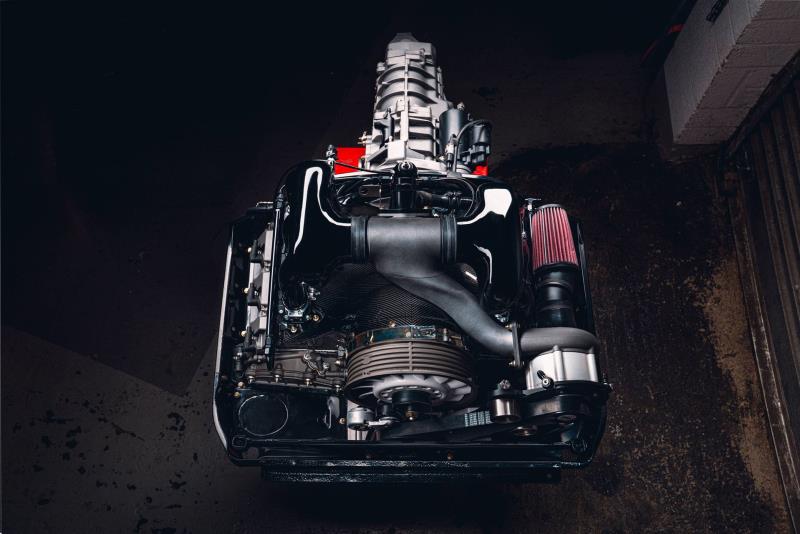 Theon Design offers customers a choice of three ultra-responsive, high-performance naturally aspirated engine configurations: a 285bhp 3.6-litre, 370bhp 3.8-litre or 400bhp 4.0-litre. For its next commission, it has taken performance to another level with a supercharged 3.6-litre unit producing 450bhp and 500Nm of torque. Sympathetically supercharged 'We wanted to deliver additional performance but also maintain the seamless delivery of a Porsche naturally-aspirated engine, so chose a Rotrex centrifugal supercharger. Effectively a belt-driven turbocharger, it gives a wonderful, linear power delivery and instant throttle response with no delay or lag. It was crucial to us that the Porsche flat-six sound was undiluted and we're very pleased with the results: the supercharger has a very subtle 'whine' so the flat-six is still front and centre, with some wonderful added character.' 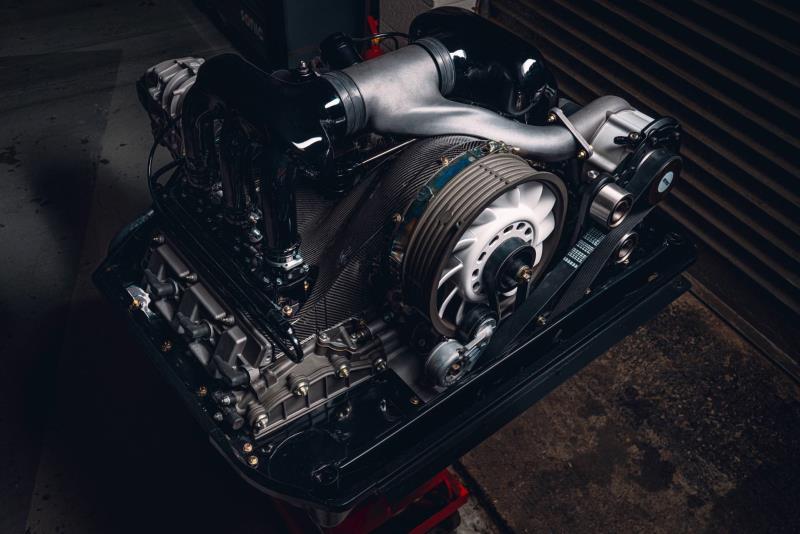 The Rotrex supercharger chosen by Hawley and his team helps the engine deliver a broad, linear and smooth surge. It also offers excellent integration and compatibility with the Porsche flat-six engine, advantages which Theon Design has further leveraged through its OEM+ philosophy. 'As every Porsche enthusiast knows, there's not a great deal of room within the 911 964 engine bay, so we located the supercharger in the space previously taken up by the original air-conditioning unit,' explains Hawley. A highly focussed six months was spent developing the optimum installation solution. The supercharger had to be totally in keeping with the car's character and Porsche's original engineering values. To achieve this, the team utilised some of the existing AC brackets to further support the unit, developing and designing additional bracketry to mimic the design and materials used for the engine cam covers and other elements. Significant effort was undertaken to ensure this would provide solid and durable support for the supercharger, allowing for no movement or flex, no matter how extreme the driving conditions, from a bumpy mountain road to a high-speed race circuit. To maintain a 'clean' look to the engine bay, Theon Design opted for a water-methanol injection system, negating the need for an intercooler and air intake apertures in the bodywork. 'Injecting a water-methanol mix into the engine plenum not only provides the same cooling function as an intercooler but also increases the octane rating of the fuel, boosting 98 octane petrol to a 110 rating and improving performance as a result,' says Hawley. 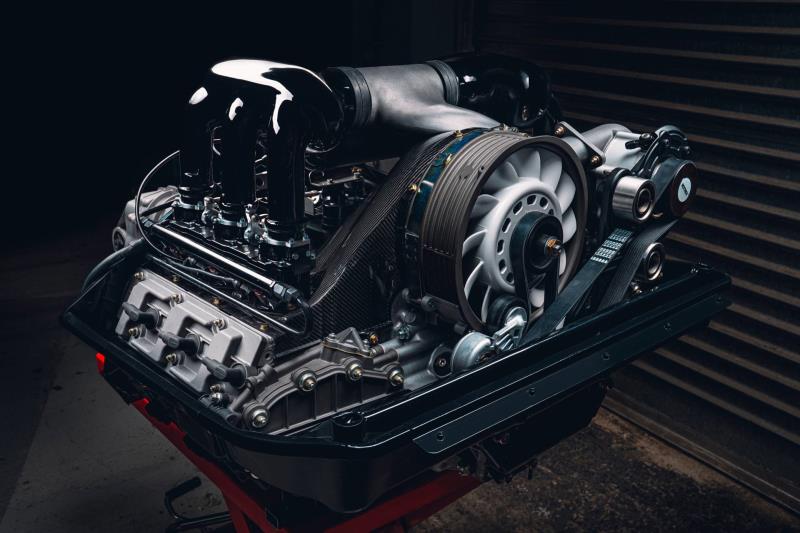 Naturally, given Theon Design's impeccable OEM+ standards, the methanol supply system is beautifully integrated, with a 3D carbon printed section to bridge the plenums, complementing the carbon fibre engine and fan shroud. Like all Theon Design commissions, the engine bay has had everything non-essential removed in the pursuit of lightness, purity and practicality. In comes a new simplified and lightened motorsport specification wiring loom with a single motorsport plug allowing for straightforward engine removal. Theon also replaces the distributor caps with coil packs, which not only further tidies the engine bay but also provides a better spark. Even the ignition leads are hidden from view, all of which adds up to an engine that is displayed in the best possible way. Bolster power, enhance drivability, maintain character While restored and enhanced Porsche 911 (964) commissions created by Theon Design are lovingly handcrafted to be enjoyed by customers primarily on the road and occasionally on the track, the ability to combine robust reliability, real-world usability and ballistic pace is an absolute priority, whatever the state of tune, adds Hawley. It's why Theon Design partners with world-leading air-cooled Porsche 911 engine specialist Nick Fulljames on all of its engines. 'The Porsche air-cooled flat-six is a remarkable unit, engineered and constructed to precise standards no other manufacturer could match,' enthuses Fulljames. 'When you strip one down, you find it has been built to the exact same tolerances as all the others. The engine is superbly robust and provides the ideal building block upon which to create additional performance if that is what the customer requires. Porsche built this engine with that flexibility engineered in, in the first place, as it was originally homologated for racing purposes, and so, with the application of modern technology, it's perfectly adaptable to receiving large power increases.' Back to basics To ensure each 3.6-litre flat-six is fit for purpose, whether that's rebuilt to original conventionally aspirated specification, equipped with a supercharger, enlarged to 3.8-litre to or to 4.0-litre, every single component is stripped, checked, and either replaced or upgraded. 'We've had decades of experience developing motorsport-inspired camshafts and tailoring them to precisely match the induction, exhaust system, cylinder head and bore size of each of the engine configuration choices on offer,' reveals Fulljames. Each engine is highly tractable at low revs and delivers sublime performance as the revs build. 'Finding the balance and creating the sweet spot is the key,' continues Fulljames. 'We use the generation one and generation two Porsche 911 GT3 models as benchmarks. That's the kind of power delivery and driving experience we want to create – really tractable low down, with superb response when revved.' Each engine is fitted with a bespoke exhaust system engineered to ensure optimum performance and efficiency. Equal length header pipes, fabricated within ultra-precise tolerances of 0.5mm are fitted. The exhaust system can also be optionally treated with a Zircotec plasma-sprayed thermal barrier coating, which delivers two crucial benefits. The coating enables exhaust gases to travel more freely and quickly to generate increased power while reducing heat transfer from the exhaust. Depending upon customer requirements, variable exhaust valve systems are also offered, giving a choice of a sporting exhaust note or quieter running. Theon Design also strips down and rebuilds each car's gearbox to ensure the perfect gearchange and fits a new limited-slip differential to further enhance the driving experience. Tested to perfection Depending upon the configuration chosen by the customer, engine build time varies between 150 and 250 hours. All engines spend a minimum of four hours on the dyno to bed in and to verify power and torque outputs, but that is merely the beginning of the testing process. 'Road testing is key to ensuring perfection,' explains Hawley. 'Each commission is driven over a huge variety of road conditions, from town centres, B-roads, A-roads and motorways. Every car must be as happy being driven at crawling speed around a busy supermarket car park as it is at high speed. It's that OEM+ attention. It's a passion for perfection. Many days are spent with Nick, tweaking the control mapping on each engine on the road, just to make sure it provides an optimum response in every possible driving scenario, and that's what delivers the Theon Design difference.' Theon Design's next commission will be revealed in the coming months.