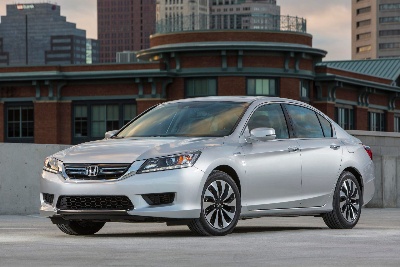 02/19/2014 - TORRANCE, Calif. -- The 2014 Honda Accord Hybrid (http://automobiles.honda.com/accord-hybrid/) has been named one of About.com's 'Best New Cars of 2014,' citing its comfortable, spacious cabin and class-leading EPA fuel efficiency ratings1. 'The Accord Hybrid embodies the refined elegance and performance that people have come to expect from the Accord lineup combined with fuel economy ratings previously unattainable in a midsize car,' said Michael Accavitti, senior vice president of automobile operations at American Honda. 'This recognition from About.com validates Honda's efforts to deliver comfortable, fuel-efficient vehicles with fun-to-drive character.' About.com's honor adds to the growing list of prestigious awards for the 2014 Honda Accord lineup that include being named Green Car of the Year, being projected to have the Best Resale Value for a Midsize Car by Kelley Blue Book, earning a TOP SAFETY PICK+ ratingby the Insurance Institute for Highway Safety (IIHS) (when equipped with the available Forward Collision Warning system) and being distinguished by the National Highway Traffic Safety Administration (NHTSA) with a 5-star Overall Vehicle Score2. 'The Honda Accord Hybrid is on this list for a multitude of reasons. The 45 MPG combined EPA rating is an astonishing number for a sedan, and my real-world fuel economy was equally impressive,' said Aaron Gold of About.com's Guide to Cars. 'And the engineering behind it is classic Honda: An elegantly simple, clean-sheet solution that no one has come up with before. The Accord Hybrid is more than a great car - this is Honda getting its game back.' The 2014 Honda Accord Hybrid is designed to deliver outstanding fuel efficiency and fun-to-drive performance, and with a 50 miles per gallon EPA city fuel economy rating1 it has the highest city mpg rating of any four door sedan. The Accord Hybrid's two-motor hybrid system, part of an expanding lineup of Honda Earth Dreams Technology™ powertrains, seamlessly blends electric-only, hybrid and engine drive modes along with powerful regenerative braking to provide responsive and efficient performance in a wide range of driving situations.
posted on conceptcarz.com
Loading...