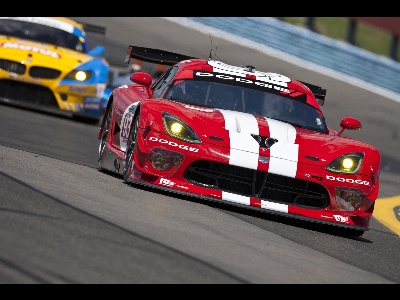 July 17, 2014 , Auburn Hills, Mich. - The throaty exhaust note of the Dodge Viper's mighty 640-horsepower V-10 engine will be roaring around the city of Detroit this weekend, as more than 550 loyal Viper enthusiasts are heading to the home of the Viper for a special Open House at several Chrysler Group facilities, where they will be able to get a behind-the-scenes look at where and how their American exotic hand-crafted vehicles are built and then put the cars through their paces. The Dodge and SRT brands are hosting this gathering on what marks the 20th anniversary of the first Viper homecoming in Auburn Hills in 1994. 'With its 640-horsepower hand-built aluminum V-10 and hand-crafted body comprised of carbon fiber, aluminum, magnesium and high-strength steel, the Viper is a one-of-a-kind American exotic vehicle that is designed to reward each owner with pure performance and a high level of exclusivity,' said Tim Kuniskis, President and CEO, Dodge and SRT Brands, Chrysler Group LLC. 'This flagship American supercar has inspired loyal Viper enthusiasts for more than 20 years and continues to do so, as is evident by the more than 550 people who are coming to this Open House.' Over the course of the weekend Open House activities, attendees will have a chance to gather for lunch and a tour of the Conner Avenue Assembly Plant (CAAP) in Detroit where their cars were hand-built, visit the Walter P. Chrysler Museum in Auburn Hills, MI and also head out the Chrysler Proving Grounds in Chelsea, MI, to drive their Vipers on the test track. Viper owners are also helping the local Detroit community by bringing a canned food item to the Conner Assembly Plant to benefit Operation Get-Down, a local crisis center supported by CAAP that provides homeless and transitional housing facilities for the Detroit area. About Dodge Viper
The fifth generation of the Dodge Viper SRT made its highly anticipated return to the high-performance sports car market in late 2012 as a 2013 model. The flagship performance machine of the Chrysler Group arrived with more power and performance, superior craftsmanship, new technologies and creature comforts. Powering the Viper is an all-aluminum 8.4-liter V-10 engine that delivers 640 horsepower and 600 lb.-ft. of torque – the most torque of any naturally aspirated sports car engine in the world. Standard on the newest Viper are safety features include electronic multistage stability control, traction control and new 4-channel anti-lock brake system (ABS). Since 1992, Dodge and SRT have built approximately 30,000 Vipers at the Mack Avenue Assembly (1992-1994) and Conner Avenue Assembly Plant (1995 – current), both in Detroit.
About Dodge The Dodge brand is tearing into its centennial year as America's mainstream performance brand, celebrating its 100th anniversary on July 1, 2014. With the purification of the brand and consolidation with SRT, Dodge is getting back to its performance roots with every single model it offers. The consolidated Dodge and SRT brands will offer a complete lineup of performance vehicles that stand out within their own segments. Dodge will be the 'mainstream performance' brand within the Chrysler showroom. SRT will be positioned as the 'ultimate performance' halo of the Dodge brand, together creating a complete and balanced performance brand with one vision and one voice. Trending News
Photo credit: Dodge
posted on conceptcarz.com
Loading...
Loading...
Loading...
Loading...
Loading...
Loading...
Loading...