July 18, 2014 by Chevrolet
INDIANAPOLIS – Actor Chris Pratt – star of the soon-to-be-released movie 'Guardians of the Galaxy' – will serve as honorary pace car driver in a 2014 red and silver Chevrolet SS pace car for the Crown Royal Presents the John Wayne Walding 400 at the Brickyard Powered by BigMachineRecords.com on Sunday, July 27 at the Indianapolis Motor Speedway. 'It's a dream come true to drive the pace car for the John Wayne Walding 400,' said Pratt, who has also appeared in 'Zero Dark Thirty' and 'Moneyball.' 'I am really excited to be part of NASCAR for the day.' Chevrolet has a long history of pacing races at Indianapolis Motor Speedway and has served as the pace car for every NASCAR Sprint Cup Series race held at the track since 1994.

'Races don't start on the famed 2.5 mile oval at the Indianapolis Motor Speedway until the Chevrolet pace car has brought the starting field to the green flag, and we are pleased to have the Chevrolet SS do the honors for the 20th anniversary edition of the Crown Royal Presents the John Wayne Walding 400 at the Brickyard Powered by BigMachineRecords.com,' said J. Douglas Boles, Indianapolis Motor Speedway president. 'We are also pleased to have television and movie star Chris Pratt behind the wheel as the honorary pace car driver and as part of our pre-race activities – and look forward to seeing him on the silver screen in his newest movie on August 1st.' The SS is Chevrolet's first V-8 rear-wheel-drive performance sedan since 1996. It is powered by the LS3 Chevrolet V-8, delivering an SAE-certified 415 horsepower and 415 lb-ft of torque, and is matched with a six-speed automatic transmission that can be shifted manually using TAPshift paddles mounted on the steering wheel.

'This year marks the 20th anniversary of NASCAR racing at the Brickyard, and it is truly special that Chevrolet has been there from the beginning racing and pacing,' said Jim Campbell, Chevrolet U.S. vice president of performance vehicles and motorsports. 'It will be great to have Chris Pratt lead the field of 43 competitors to the green flag in the Chevrolet SS pace car.'
In addition to pacing, Chevrolet has campaigned the SS as its race car in NASCAR Sprint Cup Series competition since 2013, making its debut with a victory in the season-opening Daytona 500. Jimmie Johnson drove a Chevrolet SS in '13 to his sixth series driver's championship. The Chevrolet SS also won 16 of 36 races last season as Chevrolet won its 11th consecutive manufacturer's championship. Chevrolet has won nine of the first 10 races this year with Dale Earnhardt, Jr. kicking off the 2014 season with a Daytona 500 win. Chevrolet has also won 11 consecutive NASCAR Sprint Cup Series races at the Brickyard (2003-2013) and 15 of 20 overall in the history of the Brickyard 400, including the inaugural race in 1994 with Jeff Gordon's win.
Chevrolet will pace every race during the Kroger Super Weekend July 25-27, at Indianapolis Motor Speedway. In addition to leading the field with the Chevrolet SS in the NASCAR Sprint Cup Series race, Chevrolets will pace with: Camaro ZL1 in the IMSA Continental Tire SportsCar Challenge; Corvette convertible in the TUDOR United SportsCar Championship; and Camaro 1LE in the NASCAR Nationwide Series.

Founded in 1911 in Detroit, Chevrolet is now one of the world's largest car brands, doing business in more than 140 countries and selling more than 4.9 million cars and trucks a year. Chevrolet provides customers with fuel-efficient vehicles that feature spirited performance, expressive design, and high quality. More information on Chevrolet models can be found at www.chevrolet.com. 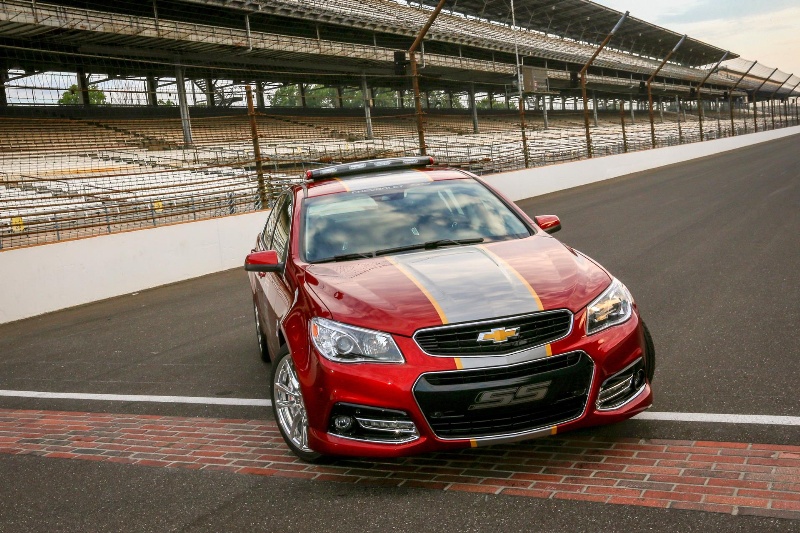