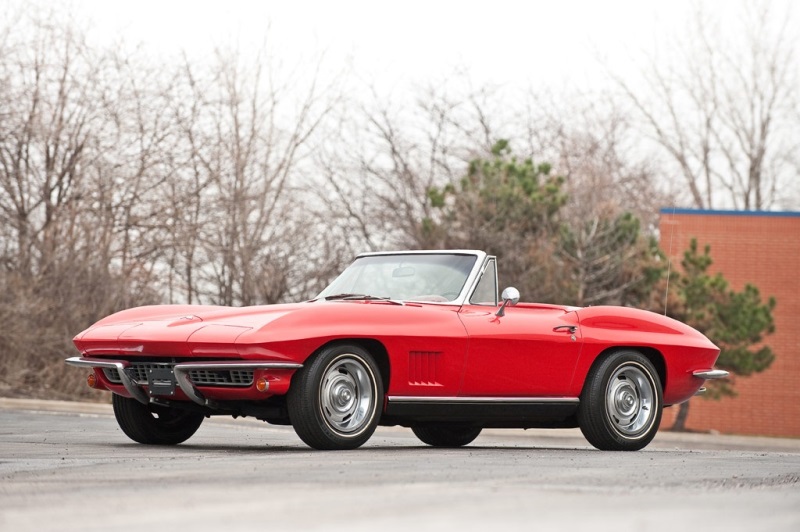 Fastback Coupe
Chassis #: 194677S105083
Sold for $44,000 at 2011 Automobiles of Arizona by RM Auctions.
The original purpose of Chevrolet's Corvette was 'image'. Corvette's image, despite some less-than-favorable cosmetic jobs, has always managed to remain intact. While 'image' was the watch-word, the second generation of the Corvette, added exercise and muscle-tone to that image to foster a sportier, athletic build.

The Corvette's produced between 1963 and 1967 were the result of a couple of different inspirations, but perhaps, none as big as Jaguar's E-Type chassis. One of Corvette's designers had an E-Type Jaguar at the time and its lines are clearly visible in the car's design. Some of the features found on the second generation of the Corvette included the split rear-window, electronic ignition, four-wheel disc brakes, an AM/FM radio, air-conditioning, a telescoping steering wheel and headrests. In addition to these changes, Corvette made use of Fiberglass for its body construction. However, because of Shelby's Cobra, Corvette emphasized losing weight. Therefore, special, ever-more lighter models, called the Grand Sport Corvettes, had been built, but in extremely limited quantities.
1967 was the second generation's final year, but only because the new Sting Ray Corvette had been delayed due to problems. Thankfully, for Corvette, what would be the Corvette Sting Ray for 1968 and the Corvette for 1967, sat on the same chassis and wheelbase. Because of these last-minute changes, refinements to the 1967 chassis were minimal. In fact, instead of aspects being heavily re-designed, the car design was actually simplified. The car featured much less ornamentation. Much of the brightwork used on previous years of Corvettes had been removed.

Some of the changes incorporated in the '67 model were the use of four red taillights (first time Corvette's would have all red taillights). The fender vents on the fiberglass body were changed. A whole range of engines were available to be put inside the chassis. Among the choices was the Big Block 427 cubic inch, 7-liter V-8, that had been introduced in 1966. In addition, 1967 marked the first time the L88 engine was available. This engine was rated at 430 bhp. Unofficially, estimates rate the actual output of the engine at well over 550 bhp. Because of the L88 or L89 engine, the hood was designed with an extra bump in order to fit the big engine under the low hoodline chassis. Corvette's using the smaller block 327 cubic inch engines would end up using the same style hood as had been designed for the 1966 production models.
One of the Corvette Roadsters offered at the RM Auction in 2011 in Scottsdale, AZ was a 1967 model with the smaller 300 bhp, 327 cubic inch V-8 engine. Offered through Bill Jacobs' Collection, this '67 Corvette Roadster has been refinished in Rally Red. It includes a handsome re-upholstered red leather and red trimmed interior.

This Rally Red '67 Corvette Roadster beckons all to the open road. The 300 bhp, 327 cubic inch V-8 stands ready to recall what a Corvette truly is. Though simplified in its styling detail, many enthusiasts are drawn to the '67. For them, the '67 exemplifies Corvette's 'image'. For them it isn't so much the look as the muscle.Sources:
'Buy: View Lots (Lot 231: 1967 Chevrolet Corvette Roadster)', (http://www.rmauctions.com/FeatureCars.cfm?SaleCode=AZ11&CarID=r246&fc=0). RM Auctions Arizona. http://www.rmauctions.com/FeatureCars.cfm?SaleCode=AZ11&CarID=r246&fc=0. Retrieved 10 January 2011.Wikipedia contributors, 'Chevrolet Corvette', Wikipedia, The Free Encyclopedia, 10 January 2011, 03:53 UTC, http://en.wikipedia.org/w/index.php?title=Chevrolet_Corvette&oldid=407007940 accessed 10 January 2011 By Jeremy McMullen

1967 Chevrolet Corvette C2's that have appeared at auction but did not sell.