Sold for $720,000 at 2013 Gooding and Company - Pebble Beach.
Sold for $670,500 at 2019 RM Sothebys : Scottsdale Arizona.
This Ferrari Daytona was delivered new to Luigi Chinetti Motors in Greenwich, Connecticut. In 1976 Luigi Chinetti sent three Daytonas to Italian designer Michelotti for redesign. This particular Spyder was specially built for Chinetti's wife Marion. Number 14299 was shown at the 58th Annual International Turin Motor show and was also displayed at the LeMans Museum in France. This Daytona has been in private collections most of its life. It has only recently participated in several 1,000 mile rallies. Ferrari Classiche has issued #14299 the Attestation of Historical Interest based on the significance of this car.

Sold for $720,000 at 2013 Gooding and Company - Pebble Beach.
Sold for $670,500 at 2019 RM Sothebys : Scottsdale Arizona.
This Ferrari 365 GTB/4 Daytona NART Spider was completed at the Ferrari factory on May 19th of 1971 and built as a US-specification 365 GTB/4 Berlinetta and finished in Grigio Ferro with red leather upholstery. The car was delivered new to official North American distributor Luigi Chinetti Motors of Greenwich, Connecticut and sold to its first owner, Dr. Silva. It remained in Dr. Silva's care for several years before being returned to Luigi Chinetti. In 1976, he shipped the Daytona to Carrozzeria Giovanni Michelotti in Torino, Italy. This was one of five examples commissioned by Luigi Chinetti between 1974 and 1976. Chinetti commissioned his first coachbuilt Daytona in 1974. The one-off design was unveiled at the Torino Motor Show and it featured a Targa Top, cut-down doors and molded bumpers.Chinetti ordered a Daytona Competitizione (chassis number 15965) for the 1975 LeMans effort. It has a similar design to the 1974 model, had a Targa top, and wore coachwork by Michelotti. In 1976, Chinetti ordered three Michelotti Spiders of the same design based on chassis 14299, 15003, and 16467. All three cars were built by Michelotti using the same wooden body buck. Though similar, they had minor differences in color, specification, and trim.This car, chassis number 14299 has slightly cut-down doors, a redesigned interior, angular appearance, and was finished in a two-tone color scheme of metallic dark blue over gray with orange-tinted leather upholstery. The car was given a unique accessory hardtop and was finished in metallic dark blue to match the upper section of the coachwork.
The completed car was delivered to Luigi Chinetti in 1977 who presented the car as a gift to his wife Marion. The car was given 'Marion' script on both doors and Chinetti's NART insignia on the trunk panel.
In the sprint of 1980, this special Daytona Spider was shipped to Carrozzeria Michelotti and shown on their stand at the International Torino Motor Show held between April 23rd and May 4th. From there, the Ferrari was loaned to the Le Mans Museum in France, where it served as a featured display between 1981 and 1982.Marion Chinetti passed away in December of 1982; her Ferrari remained in France and was even shown at the la Baule Concours d'Elegance in 1984. In 1985, it returned to the United States and was sold to Los Angeles classic car dealer Marty Yacobian. In November 1986, Mr. Yacobian displayed the special Michelotti Daytona at the Palm Springs Concours d'Elegance.In January 1990, the car was offered for sale at the annual Barrett-Jackson Scottsdale Auction and sold to Richard Gorman of Vantage Motorworks in Fort Lauderdale, Florida. It was later sold to Marv Tonkin. In September of 1991, it was sold through Al Mohr Imported Cars of Seaside, California to its next owner, who retained the car for 22 years. In 2013, the car was offered for sale at Gooding & Company's Pebble Beach auction. At the time, the car had just 1,568 miles on the odometer. It is believed that this figure was the total mileage since the Michelotti rebuild and not the total mileage from new.
By Daniel Vaughan | Mar 2014

Ferrari 365 GTB4 NARTs That Failed To Sell At Auction 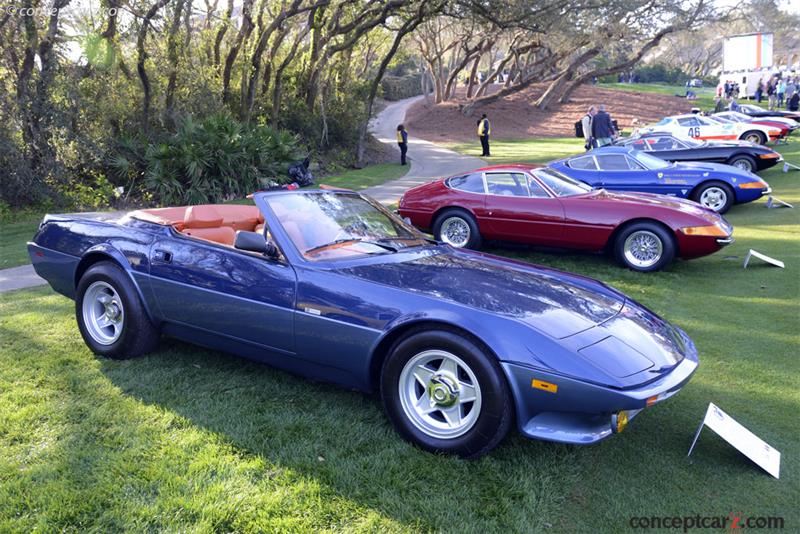