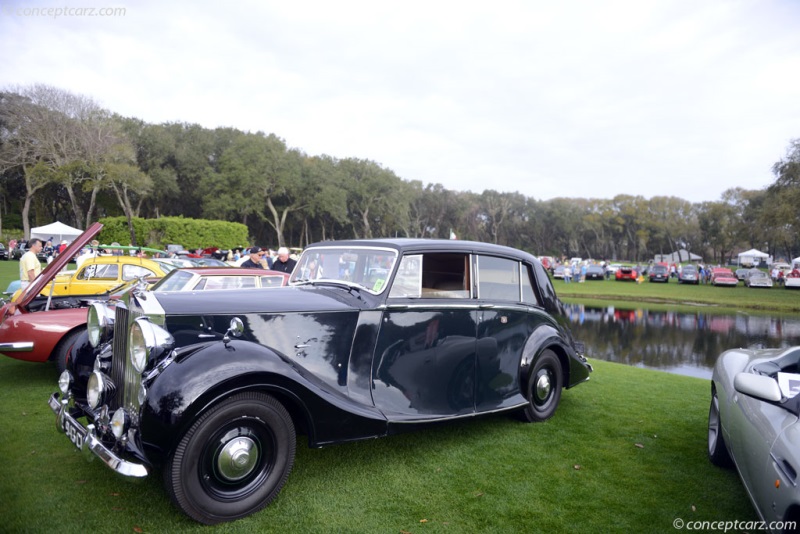 Touring Limousine
Coachwork: Hooper
Chassis #: WVA52
This car is one of the first chassis produced when automobile production resumed after the war. Rolls-Royce adapted their pre-war model with an updated engine and suspension. The Silver Wraith was the last Rolls-Royce to be built as a chassis with the body and interior built to customer specifications by one of a number of coachbuilders. Work was started on WVA52 in January, 1947. The chassis was tested and turned over to Hooper for construction of a 'Touring Limousine' body in June 6, 1947, Hooper design #8035. The completed car was tested two days before Christmas, 1947, and delivered to its first owner on January 15, 1948. The first owner, the Honorable Walter Roch, Esq., was a Member of Parliament for Pembrokeshire from 1908 to 1918 and a respected barrister who, by this time had retired to his estate in Monmouthshire.The body is a close-coupled limousine in a style popular at the time. Delivered with an electric divider and a sunroof over the front seat, it also was ordered with a radio with hidden antenna, picnic tables, bar, a rear window shade, a removable vanity mirror, and a rare electrically operated driver's window. The car was returned to Rolls-Royce in February, 1958, for major work. At that time the engine was replaced with one from WYA31 and the car was repainted and the upholstery was replaced with leather. Recent work includes an entirely rebuilt engine, paint and upholstery.
The overhead valve four-and-a-quarter litre engine is capable of speeds over 85 miles an hour on the highway. The transmission has 4 speeds with the top three gears synchronized for easy shifting. The large steering wheel helps compensate for the heavy steering and the drum brakes are both servo assisted at the front and mechanical on the rear wheels. There are hydraulic shock absorbers on all four wheels and a central chassis lubrication system. This short wheelbase car is 17 feet 2 inches long.
No auction information available for this vehicle at this time.

1947 Rolls-Royce Silver Wraith's that have appeared at auction but did not sell.