This Touring body is all aluminum and well powered with soft suspension, light steering and more nimble handling that their bulk suggested.

This Touring Convertible is powered by a twin over-head cam, in-line, 6-cylinder, 2,443 cc, engine, developing 87 horsepower coupled to a 4-speed manual transmission. The chassis consists of all-independent suspension, with front helical springs and rear torsion bars with stopping provided by drum brakes. The car weighs about 3,790 pounds and has a top speed of 89 mph.This vehicle was built in June of 1942. It was delivered to its first owner in April of 1943 with its cabriolet body being finished nearly a year later. The first owner was General Von Carnap in Berlin, who purchased several examples which are belived to have been divered for ranking German officers. The car is believed to be one of only three cars bodied by Touring in this style. The two other cars still survive, but this is the only one with its original engine.
The history trail is not fully known until it was acquired in 1960 by a Texan resident named Donald Vesley. It remained in his possession until 1974 when it was purchased by Lew Lazarus, later selling it to Dale Finstrom, and then back to Lazarus. It was then sold to John Siebert in Uxbridge, Ontario in the early 1980s. After a full restoration, the car was sold to Paul Myers in 1989 who retained it until 1997.
The car was shown at Pebble Beach, is a CCCA Senior National First Prize winner where it was judged 100 points. It was shown at Meadow Brook and earned a Most Elegant Sports Car Award at the 2005 Amelia Island Concours. It was Best-in-Class at Greenwich, Connecticut in 2008 and has been invited to attend the 2009 Pebble Beach Motoring Classic. It has also been invited to the 2009 The Quail Motorsports Gathering and the Pebble Beach Concours d'Elegance.In 2008 it was brought to the Hilton Head Classic Auction presented by Worldwide Group Auctions where it was estimated to sell for $400,000 - $500,000. On auction day, the car was sold for $345,400 including buyer's premium. 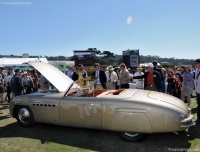