1971 Dodge Demon
Produced: 79,959
Original Price: $2,345 - $2,720
Average Auction Sale: $35,798
Median Auction Sale: $33,000
Chassis Profiles
The Dodge Demon was the company's value package product and was similar in design, trim, and style to its Dart sibling. It was based on Plymouth's Duster body that was shortened three-inches and the overall length was reduced about four inches. The Demon complied with all federally mandated safety features and came equipped with a standard 198-cid Slant Six engine. They had pivoting rear quarter windows, black rubber floor mats, and the Demon nameplate located on the right side of the rear escutcheon panel and on the front fenders, just behind the front wheel well.

The short platform meant it was an ideal candidate for a high performance option. In this case, it was the Demon 340 that came equipped with a 340-cid V8 and a three-speed manual transmission. The package included special E70-14 belted black sidewall tires, performance bodyside and rear deck panel tape stripes, a Rallye suspension, and a floor mounted shifter.

Naturally, Dodge advertised the Demon as a performance car.

A new audio option became available for 1971 - Chrysler's cassette-recorder. While the 8-track tapes were rather large and bulky, the cassette player was relatively compact, and could be mounted on the console or on its own floor-mount casing. The unit was offered with an available microphone in which one could record their own dictation.
By Daniel Vaughan | Feb 2013 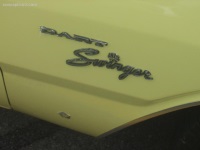