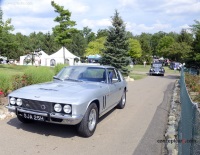 1966 Jensen FF
Chassis Profiles
Total Production: 320 1966 - 1971
The Jensen FF was produced from 1966 through 1971 with a total of 320 examples being produced. It was an impressive vehicle that had the technology to match. It was given a four-wheel drive system and anti-lock Dunlop Maxaret electro-mechanical braking system. The cars rested on a wheelbase that measured 109 inches and had a length of 191 inches. The V8 engine measured 383 cubic-inches and produced over 320 horsepower. The engine was mated to a four-speed automatic gearbox and sent power to all four wheels. The four wheel drive system was the first attempt to outfit a production sports car.
By Daniel Vaughan | Sep 2007
Jensen Models
C-V8
FF
Interceptor
Jensen-Healey
Model H