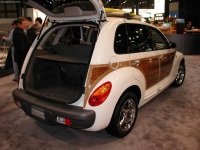 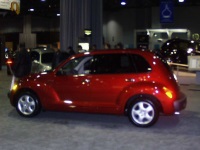 2000 Chrysler PT Cruiser
Planning a revamp for the Plymouth line, previewed by the Plymouth Prowler 'hot rod', Chrysler was hoping the PT Cruiser would be the daring new look to capture fans. Evoking memories of panel vans of the 1930s and old gangster getaway cars, Chrysler debuted the PT Cruiser in 2001. A retro styled compact car, it was produced from 2001 until 2010 as a four-door wagon, and from 2005 until 2008 it was available as a two-door convertible. It shared a platform with the Neon, and had a reputation of utility and dependability. The PT Cruiser was originally conceived as a Plymouth model but it got the Chrysler nameplate when the Plymouth brand was discontinued in 2001. Designed by Bryan Nesbitt who also later styled the Chevy HHR, the initials PT stood for 'Personal Transport'. The PT abbreviation is also used on the similar retro styled Chrysler concept car; the Pronto Cruiser.

Many of the design features, in particular the grille, were used to create the Plymouth Pronto concept car in 97. The following year the look was fine-tuned and another Plymouth concept called the Chrysler Pronto Cruizer directly previewed the design of the PT Cruiser. With Neon components, the Pronto Cruizer was created as a contemporary interpretation of the Chrysler Airflow, but the final design used a completely separate platform. The PT Cruiser grew out of collaboration among Chrysler executive Robert A. Lutz, designer Bryan Nesbitt and Dr. Clotaire Rapaille.

Classified as a truck in the US by the NHTSA for CAFE fuel economy calculations, the PT cruiser is called a car by all other metrics. The Cruiser was designed to fit the NHTSA standards for a light truck in order to bring the average fuel efficiency of the company's light truck fleet into compliance with CAFE standards. The car featured a maximum cargo space of 76 cubic feet and had plenty of seating room and headroom. Incredibly versatile, the seats in the back could be completely folded down or removed and there was a two-tiered luggage area.

Manufactured at Toluca Car Assembly in Toluca, Mexico, the PT Cruiser was awarded the North American Car of the Year in 2001. Car and Driver also recognized the PT Cruiser on its Ten Best List for the same year. In 2006 DaimlerChrysler announced that it had produced 1,000,000 PT Cruisers at the Toluca Plants. The car was assembled at the EUROSTAR Automobilwerk in Graz, Austria for global markets in 2002 and used the production code PG. In Europe the Cruisers built in 2001, or in Mexico from 2003 on were under the production code PT.

The standard engine in the PT Cruiser was a 2.4-liter four-cylinder producing 150 horsepower. Either a five-speed manual or a four-speed automatic was offered. A 2.2 L four-cylinder diesel engine was built by Mercedes Benz and was available in Europe, Asia and South Africa. Outside of the U.S. a 2.0 L engine (D4RE) that produced 140 hp SAE at 6500 rpm with 130 lb/ft of torque at 4800 rpm was offered. The acceleration was considered sufficient, but the fuel economy was disappointing for a small wagon. Chrysler added a turbocharged GT model for 2003. Initially it produced 215 horsepower, and grew to 230 hp for 2006. It was discontinued for 2007. A 180-hp turbo engine was offered on certain trims from 2004 through 2009.

The body style of the PT Cruiser remained reliably the same each year, however there were various versions of the car. The versions were designated by badges in the lower left hand corner of the rear lift-gate. Cruiser models included the Classic Edition, Limited Edition, Touring Edition, 'Dream Cruiser', 'Street Cruiser, and 'Pacific Coast Highway Edition'. There was also Non-GT Turbo edition models that were classified by a '2.4L Turbo' badge found on the lower right hand corner of the rear lift-gate. Introduced in 2003 the GT model featured a '2.4L Turbo High Output' badge on the right hand edge of the lift-gate.

Debuting in 2003 was a turbocharged version of the PT Cruiser dubbed the PT Cruiser GT. It utilized the same 2.4 L turbocharged I4 engine as the Dodge Neon SRT 4. It had a top speed of 125 mph and had numerous features standard that included 4-wheel disc brakes with ABS and traction control, specially tuned suspension, chromed 17' wheels and performance-tuned exhaust system with a large diameter chrome exhaust tip.

Two special packages were offered for the PT Cruiser, the Factory Flame package which offered optional flame-inspired decals spreading from the front fenders, and the Woodie package, available only on 2003 models, featured simulated wood panels that flowed down the side of the vehicle and around the rear hatch.

Introduced in 2005, the four-seat convertible model had two doors with an integrated 'sport bar' for additional rigidity and rollover protection. It was a much less drafty ride in the back of the car thanks to the sport bar. The production of the convertible ceased on December 21, 2007, but the final 2007 convertibles were marketed as 2008 models.

For 2006 the PT Cruiser received some updates that included a new 'chrome' grille, brand new scalloped headlights, redesigned taillights, new lower front fascia that no longer featured patented brake cooling ducts, and available round fog lamps. On the inside the revamp included a modernized dash, an analog clock to the center stack and new materials. Newly innovative to the times, the audio system now had a line-in jack for MP3 players built into the dash. Available as an after market unit on 2007 models was a 'Mopar' cruise control unit.

In 2007 Chrysler dealers were able to order cars with separate options like Side Impact Airbags and anti-lock brakes. Optional this year was Sirius Satellite Radio that could be installed with a factory appearance as a dealer option. The PT Cruiser was the only small vehicle to not offer electronic stability control and one that earned poor marks in side and rear evaluations.

It was announced on January 12, 2009 that Chrysler would be discontinuing the made model. Six months later following reorganization into the 'New Chrysler', the company changed their plans to discontinue the model by stipulating that it will do so for only Mexican and Canadian markets. With a total of 1.35 million models produced, the PT Cruiser ended its production on July 9, 2010.

Various special edition models of the PT Cruiser were available. In 2006 Chrysler offered the Street Cruiser Route 55 model. Finished in either Solar Yellow or Black, the model featured Solar Yellow brake calipers, solar-tinted sunscreen glass, body-color grille, liftgate mounted spoiler and 17' all-season performance tires. It also came with four-wheel anti-lock brakes with low-speed traction control, a sport suspension and speed control. Brightwork accents came with chrome body-side moldings, a chrome exhaust tip and 17', chrome-plated, and five-spoke Empire aluminum wheels. A 'Street Cruiser' badge with Solar Yellow accents on the liftgate and 'Route 66' badges on the front doors were found on the outside of the model. The manual version was priced at $19,185 while the automatic model was priced at $20,020.

Based on the 2008 PT Cruiser LX and produced in a limited production run of just 500 models, the Street Cruiser Sunset Boulevard Edition featured 'Sunset Crystal' body with various chrome body-trip pieces accenting it. The model featured deep-tint glass and 16' chrome wheels with all-season touring tires. The price tag for a manual version was $16,650 and $17,475 for the automatic model.

In 2009 the Dream Cruiser Series 5 was introduced for the US market. A total of 1,750 of these models were produced. Featured 4-speed automatic transmission, the majority of the models had a pearl white body, except for 2 models, one in inferno red, and one in bright silver. The Dream Cruisers had a black roof and spoiler, upper and lower billet aluminum cross-hatch pattern grills, the inside of the car was gray with leather and chrome trim, chromed door handles and body-side moldings, chromed stainless steel exhaust tip and 17' SRT Design wheels with all-season performance tires. They also featured specialized 'PT' door badging, PT Dream Cruiser Series 5 tailgate badge, a Brilliant Black Crystal Pearl hoop spoiler and fog lamps. The Dream had a MSRP of $22,700 and was debuted in conjunction with the 2008 Woodward Dream Cruise.

The PT Cruiser Sport edition took its styling cues from the Classic trim of which it was based from. It featured a roof mounted body color spoiler, PT Cruiser Sport badge, exclusive graphite metallic paint and 16' alloy wheels. It was available with a two-liter petrol engine and was priced UK£13,995.
Incredibly eye-catching, the Couture Edition PT Cruiser showcased a contrasting two-tone paint scheme of silver metallic on the bottom and black on the top with a red pinstripe in the middle diving the two. On the inside were Radar Red leather buckets with black piping, chrome appliques and a red shifter knob. With a limited production run of just 500 units, the other exclusive features included 16' chrome clad wheels with chromed bodyside moldings and accent.