1967 Morgan Plus Four Plus
Chassis Profiles

Underneath the nearly streamlined glassfiber bodywork is a standard Plus 4 chassis, itself a decades' old design, and a Triumph TR4A motor and transmission. The pushrod engine produces 110 horsepower and was mated to a four-speed transmission with synchromesh on the top three gears. The front suspension was lubricated by grease and by engine oil which was administered via a button located under the clutch pedal. The rear suspension had conventional leaf springs with a solid rear axle. Disc brakes could be found in the front and drums in the rear. Performance was spirited and an improvement over both the Plus 4 and TR4A because of its lighter weight and smooth outer shape.

The windows were made from glass, not plastic, with roll-up on the sides. Total weight was very impressive, at a mere 1800 pounds. With the 110 horsepower, lightweight construction, and streamlined design, the +4+ was able to achieve a top speed of 115 mph.

The fiberglass bodywork was created by an outside supplier. In the front was the familiar Morgan designed grille positioned above a traditional Morgan bumper. The roof of the car, though it appeared to be removable at fist glance, was fixed. Inside, the cockpit area provided seating for two with a cargo area behind and additional storage room in the trunk.

Initial production goals were to reach 50 units, but after three years and only 26 examples sold, Morgan decided to abandon the project. 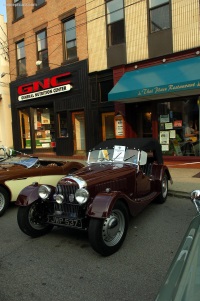