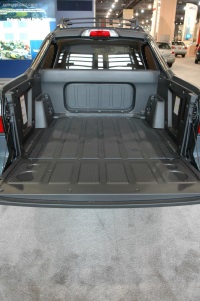 2002 Subaru Baja
Original Price: $23,995
The Subaru Baja was produced from 2003 through 2006. It was a very unique vehicle that had all-wheel drive, seating for four, and an open-bed. It was a combination of a passenger vehicle with the versatility of a pickup truck.

There have been similar designs in the past, such as Subaru's BRAT four-wheel drive vehicle that was produced from 1978 through1 1987, the Ford Ranchero, and Chevy El Camino.

Over four and a half years, only 30,000 examples were sold. Subaru had hoped for 24,000 units per year.
By Daniel Vaughan | May 2008
Subaru Models
360
Ascent
Baja
BRZ
Forester
Impreza
Legacy
Outback
Pleo
SVX
Tribeca
Vivio
XV Crosstrek