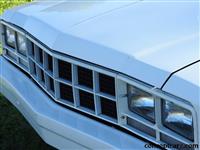 1978 Ford Fairmont
Produced: 460,981
Original Price: $3,590 - $4,045
Average Auction Sale: $3,975
Median Auction Sale: $3,975
Chassis Profiles
The Ford Industry was started in 1903 by Henry Ford who was 40 at the time, and it soon became the largest automotive company in the world. The Ford Company is also the only company that has been managed by a family for over 100 years with vehicles sold worldwide. The Ford Company has made its mark in the automotive field and today they are responsible for many of the innovative vehicles we see each and every day.

As gas prices rose in the United States, Ford introduced the answer, the Ford Fairmont which was a big boost in the arm for Ford. Sales were spectacular on these luxury compact cars and reviews compared the Fairmont affably with BMV and Volvo models of that period. Designed to be a family car efficient and comfortable, along with being an economic ride, the Fairmont was unveiled to the public beginning in September of 1978. North American compact car, the Ford Fairmont was produced between 1978 and 1983.
The first-ever vehicle built on the Ford Fox platform, the Fairmont would be the basis for a variety of other models that included the 1980 to 1988 Thunderbird, the '81-'82 American Ford Granada, the '79 to '04 Mustang and the downsized Lincoln Continental in 1982. The Fairmont sported a rear-wheel-drive unibody that Ford would continue to successfully use for the next fifteen years. The Fairmont replaced the Maverick and during its introduction, it was twinned with the Mercury Zephyr.

The 1980 Fairmont was introduced in both 2 and 4-door sedan form, along with 5-door wagon bodies. Later on it was joined with a specialty coupe with a different roofline known as the Futura, a name that had first appeared in the Ford Falcon line 17 years earlier. The Futura came with a unique two-piece vinyl roof with an upswept central roof band, very similar to the one on the contemporary Thunderbird.

A dazzling success for Ford, the 78 Fairmont set the record for production of a new model, exceeding the record previously held by the 1965 Mustang. Though it kept a conventional rear-wheel-drive platform, the Fairmont was expertly packaged and offered excellent passenger and cargo room for its size. The reviews on the Fairmont were really promising from the beginning, and the Fairmont was uniformly praised and was favorably compared with contemporary Volvo and BMW models. Compared with the Maverick model it replaced, the Fairmont featured rack-and-pinion steering which gave it much better handling and road-ability.

Lightweight components made the roomy, midsized-bodied Fairmont feature even better fuel economy than the Maverick. During this time in the United States, fuel economy was becoming an issue as gasoline prices had been rising for the last five years, ten cents on average.

At the time of its debut, the Fairmont's front end differed from the Zephyr with its two headlights, rather than four featured on the Zephyr, all except the Futura coupe. Beginning in 1981 though, the entire Fairmont lineup received four headlights as standard. For this year a very wide assortment of engines and transmissions were available including a 2.3 L four-cylinder, 3.3 L six-cylinder, and 255 CID and 302 CID V8s. Transmissions on the Fairmont included three or four-speed manuals and the more popular three-speed automatic.

The '78 Fairmont featured noteworthy interior room along with a roomy cargo area for a vehicle of its size. Ford focused on these features in their print advertisements. One 1978 magazine highlighted how the Fairmont was the ideal vehicle for families with three reasons why to buy a Fairmont; 'most room for the money of any car or wagon in its class', 'highest mileage rating of any car in its class' and 'the lowest sticker price of any car in its class'. At the time, a 1978 2-door Fairmont retailed at $3,589.

The Ford Fairmont was even a successful competitor on the drag-racing circuit. Bob Glidden, a racer debuted his '78 red, white and blue Fairmont at the Edgewater Winston Championship Series on July 8, 1978. At the end of the season, and twenty-five consecutive wins, he retired the car. On its first run Glidden and his Fairmont set a national record of 8.76, and today this winning vehicle is currently on display at the NHRA Motorsport Museum.

In 1979 and 1980 a turbo-charged four-cylinder carbureted 2.3 L engine from the Mustang lineup was offered. Ford also offered an ESO Package on the Fairmont; the ESO or European Sport Option was offered to cover the market that wanted their cars to feel and act 'continental'. This package featured blacked-out grille, deluxe bumpers, black cowl grille, brightbelt moldings, black window frames, black quarter window ventilation louvers, black lower body parts, special wheel covers and black outside mirrors. The suspension also had a rear-stabilizer bar and was rated by Moor Trent as a more taut and responsive ride than the standard Fairmont. Several turbo four-door automatic sedans were utilized for testing by the California Highway Patrol.

A brand new Ford Granada was introduced on the same platform and wheelbase and this time the Fairmont was positioned in more of a basic, entry-level role. The Fairmont wagon was dropped in 81 and replaced by a Granada wagon. The Granada coupe was discontinued in 1983 and the wagon and sedan were re-skinned and rebadged as the Ford LTD, the name previously of Ford's full-size car which was renamed the Crown Victoria. The Fairmont Futura coupe and four-door sedan continued on in production until 1983 until they were replaced by the front-wheel-drive Ford Tempo for the 1984 model year. Today, Fairmonts can still be found online and in car traders' magazines.

In Australia, Ford Australia introduced a Fairmont from 1965 until 2008. With numerous differences in comparison to the American version, the Australian Fairmont came in two body styles; the four-door sedan and the five-door station wagon.By Jessica Donaldson