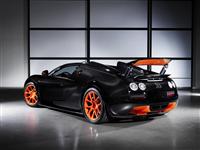 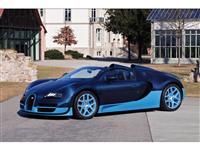 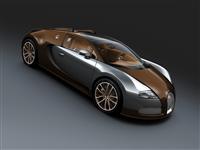 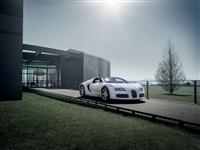 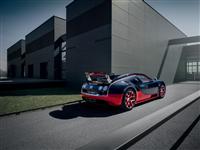 2001 Bugatti 16·4 Veyron
The trials of the fastest road sports car in the world have been successfully completed. One of the most ambitious projects in automobile history is entering its production phase. The first Bugatti Veyron 16.4 cars, built mainly by hand, are already being completed and will be delivered to customers this year.

The sports car, capable of more than 400 km/h, is driven by a 16-cylinder mid-engine, that at 710 mm long is no larger than a conventional V12 unit, and due to its lightweight construction weighs only about 400 kilos. Its compact dimensions are due to the unique arrangement of its cylinder banks in a W configuration. Two VR8 blocks, each with a fifteen degree bank angle, are joined in the crankcase to form one engine. Both eight cylinders are set at an angle of ninety degrees to each other and are aspirated by a total of four exhaust gas turbochargers. The engine delivers 1001 HP at 6,000 r.p.m. and provides a maximum torque of 1250 Newton metres at between 2,200 and 5,500 r.p.m.

To apply the power of the 64-valve unit to achieve satisfactory driving dynamics both in everyday traffic and on the racetrack, the Bugatti development team of Dr. Franz-Joseph Paefgen and Dr. Wolfgang Schreiber has realized a propulsion unit that is without parallel in its complexity. If the extreme engine power is a master stroke of genius, its conversion for road use is an equally tough challenge. As Dr. Schreiber says 'For 1000 HP propulsion power, the system demands approximately 2000 HP to be additionally generated as heat energy during combustion. Half in each case is dissipated in the exhaust gas and cooling water'.

To do this, the Bugatti engine has two water circuits. The larger of the two with 40 liters of cooling water has three coolers in the front section of the car, to keep the engine at operating temperature. The second circuit, called the low-temperature system, has a separate water pump and contains 15 liters of cooling water. These are used to cool, by up to 130 degrees, the charged air, heated during compression in the turbochargers, in two heat exchangers mounted on the engine. The cooled, charged air then passes through two 'air manifolds' into the combustion chamber, which it then leaves as exhaust gas at approximately 1,000 degrees. It then passes through the turbines of the exhaust gas turbochargers. This causes the exhaust gas to expand, so that it is cooled by up to about 150 degrees, is then cleaned in the catalyzer and exhausted.

In addition to its unique compactness, the high performance of the power unit is the centrepoint of the dvelopment. Lightweight materials are used that not only result in a low power-to-weight ratio but also particularly provide the spontaneous response of the moving engine-internal masses. In addition to piston rods of titanium, the so called 'easy runners', the eight-stage oil pump integrated into the crankcase for dry sump lubrication has light aluminum gears. Because the arrangement of the 16 cylinders ensures extremely quiet running, only a small flywheel is needed. The use of motor sport technology is evident not only from the plasma-coated running faces of the cylinders but also by the use of high-strength steel for the shafts and gears in the aluminum crankcase.

Unique in engine design is the integration of knock and misfiring detection in an ion current system. Because the multiplicity of cylinders means very quiet running and ensures that the velocity difference will be extremely small in the event of a cylinder misfire, cylinder-selective detection by measuring rough running is not reliable enough. Therefore, Bugatti Ion Current Sensing (BIS) is used. The ion current flowing at each spark plug at the timepoint of ignition is monitored by a separate evaluation sensor system. The data obtained is passed to both engine control units. If knocking combustion or a misfire is detected, the associated control unit immediately initiates countermeasures, such as retardation of the ignition timepoint, shutdown of the cylinder or reduction of the charge pressure. According to the head of Bugatti Unit Development Gregor Gries, 'The aim of our technology is
to generate the maximum performance from the engine in a stable, clean manner'.

The power generated in the engine is transferred to the flange-mounted direct manual gearbox (DSG). The torque and speed is then transmitted, through the gearing of seven forward and one reverse gear, via a universal drive to the front axle gearbox and via a second universal drive, along the right side of the engine to the rear axle gearbox. Both the DSG and both axle gearbox housings are of lightweight aluminum construction. The drive power is distributed to the front and rear axles by means of a Haldex coupling, an actively-controlled multi-disk, inter-axle lock directly connected to the front axle gearbox. The following front axle differential distributes the power to both front wheels. In the rear axle differential the power is distributed to the rear wheels via a bevel gear and a further differential. In addition, an actively-controlled, hydraulically-actuated, multi-disk differential lock is installed here. When necessary, it prevents speed differences between the rear wheels and ensures optimum directional stability when accelerating and when cornering under load. All load distribution functions are completely automatic and are undetected by the driver.