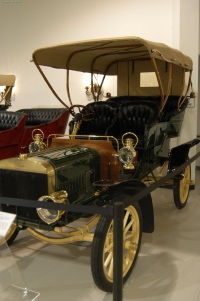 1904 Ford Model B Four
Original Price: $2,000
Chassis Profiles
Debuting in 1904, the Ford Model B was a classy touring vehicle that was the first model by Ford to use the front-engine layout. The large 24 hp 4-cylinder engine was placed at the front behind a conventional radiator.

The Ford Model B was the upscale high-end vehicle that cost $2,000. Three years into production, Ford had to face facts. Sales were unfortunately much slower than the Model C, which was ironic since it was priced 1/3 less than the Model B. In 1906 the Model B was deleted and replaced by the derivative Model K.

In 1932 Ford introduced the new Model B, basically an updated version of the Model A that was replaced by the 1935 Ford Model 48. The Model B was basically a four-cylinder model with a Ford Model A engine. At this same time in history, Ford began producing a vehicle with Ford's new Flathead V8 engine that was very similar to the Model A. This mode was named a Model I8, though today it is better known as the Ford V-8.

In 1932, two versions of the Ford Model B were debuted, the V8 flathead engine one, and a four-cylinder model. Both models came in two different body styles, the rare '3-window' Deluxe Coupe; featuring front opening doors, and the '5-window'; two door windows, two quarter panel windows and the rear window. The Model B was the less popular four-cylinder model and was a much more updated version of the four-cylinder Model A.

The 18 Model was the first time the V-8 engine was successfully placed in a low-priced vehicle. The cost of some models with the 65-hp engine was around $460. The roadster peaked at only 520 units for the first year, and 28,904 for the two-door cope.

Popular today by the world's standards, the 1930's model B is a highly rare model for collectors.By Jessica Donaldson