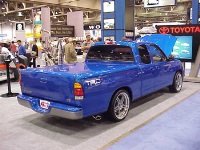 Introduced at the beginning of the new millennium, the Toyota Tundra featured a refined V8 engine and Toyota's distinct reputation for durability and reliability. Originally going into production in 1999 as a 2000 year model, the Tundra had an all-American look and feet and came with something that the T100 never had; a fierce V8 engine underneath choice. Enthusiasts believed that the Tundra was the first import-brand full-size pickup that could face off against the Big Three's pickups. Nominated for the North American Truck of the Year award, the Tundra was also named as Motor Trend Magazine's Truck of the Year in 2000 and 2008. As of the 2007 model year, the Tundra carried 17% of the 1/2 ton full-size pickup market and single handedly beat the GMC Sierra in monthly sales. Today, the Tundra is assembled in San Antonio, Texas and Princeton, Indiana.

Strangely enough though, the first-generation Tundra was more popular with recreational pickup buyers than actual hard-core users. The Tundra was aimed more at those seeking an easy-to-drive commuter or customers tat wanted a utility vehicle that was capable of handling weekend trips to the local home depot. Not quite full-size in dimensions or work capacity, independent contractors or people with heavy trailers or boats to pull, were not interested in the original Tundra's limited body configurations, lower tow ratings and smaller size.

Sharing many similarities with the unpopular Toyota T100, the first generation Tundra was also quite similar to the more popular Toyota Tacoma. Though the Tundra was slightly larger than the T100, it unfortunately was perceived as being too small and ‘car-like' and wasn't any threat at all to other domestic pickup trucks.

Already available at the time was a Toyota Racing Development (TRD) derived supercharger engine for the 3.4 liter V6 that bumped the horsepower up to 260 hp and achieved 260 lb/ft of torque. The TRD also introduced a supercharger for the V8 engine near the end of the second year of production for the Tundra that pushed the V8 numbers to the mid 300 hp range and torque to the 400 lb/ft range. The V6 supercharger is still widely available, but the V8 supercharger is becoming more and more rare due to TRD ending production of the device because of issues regarding its compatibility with the engine.

Tundra prototypes and 'show trucks' were originally known as T150's but Ford and automotive enthusiasts discouraged the name as it seemed too close to the market-leader F-150. A lawsuit ensued and the production truck was dubbed the Tundra Ebay Boulay Strikes Again.

For 2003 the grille on the Tundra was updated and the Double Cab version joined the lineup in the 2004 model year. A genuine crew cab with four normal doors, the Double Cab featured interior and exterior details that were copied from the Toyota Sequoia. The bed of the Double Cab was almost 5 inches longer than the competing Ford F-150 or Nissan Titan and was also 13 inches longer and 3 inches taller than the Regular and Access cab versions.

For the 2005 model year, a brand new engine was introduced that was a 4.0 liter V6 rated at 236 ft/lb of torque. The 4.7 liter V8 was updated with Toyota's VVT-i variable valve timing technology that was rated at 271 hp and 313 lb/ft of torque. The 5-speed manual eventually morphed into a 6speed manual and a 5-speed automatic replaced the 4-speed. The Double Cab featured a towing capacity of about 6,800 lbs, and the Access Cabs and Regular Cabs came with a 7,100 pounds towing capacity.

The current version however was redesigned and was aimed at attracting only serious pickup buyers. With true full-size proportions, the Tundra was an American-built half-ton truck. The second generation came in three cab sizes; regular cab, Double Cab and CrewMax, with three different bed lengths and a choice of three engines. The Regular Cab and the shorter-bed Double Cab featured a 4.0-liter V6 engine as standard, and was rated at 236 horsepower and 266 lb/ft of torque. Optional on these models and standard on all other Tundra's was a 4.7-liter V8 engine that achieved 271 horsepower and 313 lb/ft of torque. All Tundra's featured an optional 5.7-liter V8 engine that achieved 381 hp and 401 lb/ft of torque. The smaller V8 and the V6 came teamed to a five-speed automatic transmission while the larger V8 was joined to a six-speed automatic. All of these versions were available with rear-wheel drive or four-wheel drive.

The Double Cab is basically a larger extended cab with four forward-hinged doors and the Tundra CrewMax is an extra-large crew cab. The regular cab came in just a basic Grade trim level only. Both the Double Cab and Crewmax are available in more upscale SR5 and Limited trim levels. Both the regular and Tundra Double Cabs came with a available bed length of a 6.5-foot or an 8-foot bed, while the CrewMax came strictly with a 5.5-foot bed. The Tundra was now on equal or higher standing with other competing half-ton pickups.

The Toyota Tundra is now equipped even easier for a variety of possible configurations as either a work vehicle or a family hauler. The Double Cab was medium-sized and was the extended-cab version of the Tundra and was just as large as many of the competitors' crew cabs. The huge Tundra CrewMax came with the roomiest four-door cab in the full-size segment. Inside, the current Tundra features extraordinary interior room with plenty of handy features and great road handling.

Introduced at the 2006 Chicago Auto Show; a larger Tundra was introduced with a variety of enhancements that included a towing capacity of up to 10,000+ lb and a payload capacity of over 2,000lbs, along with a new 6-speed automatic transmission. This was the second generation of the Toyota Tundra and 3 engines were now available, a new 5.7 liter V8 that produced 381 horsepower and 401 lb/ft of torque, a 4.7 liter V8 rated at 276 hp and 313 lb/ft of torque and a newly introduced 4.0 liter V6 that was rated at 236 hp and 266 lb/ft of torque.

The newest, second generation Tundra was introduced in February of 2007 and was available in 31 configurations that consisted of 3 bed lengths, 4 wheel-bases, 3 cab configurations, and 2 transmissions. The previous generations Access Cab was replaced with the new Double Cab. The previous generations Double Cab was also replaced with a brand new Crew Max; which was built to compete with the Dodge Ram Mega Cab. The Double Cab came with the available option of either an 6 and a half foot bed, a regular bed, or an 8 foot long bed. The Crew Max was only offered with a 5 and a half foot short bed.

A new 6-speed automatic transmission with a manual shift mode was standard with the 5.7 liter engine and gave it a 0-60 mph time of 6.3 seconds. It also featured a quarter mile time of 14.7 seconds. Built to deliver power and fuel economy, the 5.7 liter is a VVT-i engine. The Toyota Tundra's 5.7 liter 4x2 engine was rated to deliver an estimated 20 miles to the gallon on the highway.

The newest generation of the Tundra was very popularly aimed at construction workers, because it included extra large door handles, headrests that could accommodate a worker with his hard hat on, a deck rail system and an integrated tow hitch. This newest model, as a standard model, also came with an automatic limited slip differential vehicle stability control, electronic brake-force distribution, traction control antilock brakes, brake assist and tailgate assist. Unfortunately the Toyota Tundra was priced at the extravagant MSRP of $22,290, which was priced more than the Chevy Silverado Work Truck and the base Ford F-150.

This newest model of the Tundra is built in two different locations, both of them located inside the U.S. The 2008 Tundra model added 13 variations, bringing the grand total up to 44 model variants. This newest model featured even more additional features at an even lower price. A new 'Tundra Grade' trim was available, and was lower than the SR5 trim and was aimed at trades-folk, rather than the price conscious customer.