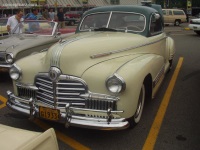 1942 Pontiac Streamliner
Produced: 39,247
Original Price: $1,000 - $1,315
Average Auction Sale: $28,000
Median Auction Sale: $28,000
Chassis Profiles
Though the name Pontiac didn't find it itself on a car until 1926, the marque actually dates back to 1893 when Edward M. Murphy founded the Pontiac Buggy Company in Pontiac, Michigan. The town had gained its name from a mighty Indian chief who was responsible for banding together with the Chippewas, Ottawas, Pottawattamie, and Miamis into a powerful league.

The Pontiac lineup was restyled by Herman Kaiser along with Harley Earl's guidelines in 1949. Introduced in 1942 the Streamliner was a full-sized car produced by Pontiac until 1951. During 1940 Pontiac, along with Oldsmobile had the distinction of featuring all three of GM's mainstream platform, at least for one year. Pontiac introduced its initial B-bodied car; the Deluxe Series 28 Eight along with the Torpedo on the C-body in 1940. This C-body featured very hip 'torpedo' styling within a more streamlined body. 2 to 3 inches lower, the running boards were gone and passengers received more shoulder and hip room thanks to an additional 5 inches in width. Offering true comfort for up to six passengers the Torpedo featured a column-mounted shift lever.

The following year both the A-body and B-body were revamped in a similar fashion. Pontiac renamed its entire line 'Torpedo' and featured models ranging from the low-end A-bodied Deluxe Torpedo, the mid-level B-bodied Streamliner Torpedo, and the high-end C-bodied Custom Torpedo. This was the final year that Pontiac would offer a model with the GM C-body until the introduction of the Pontiac Safari and Grand Safari station wagons of '71-'76. The Torpedo name was shifted to the A-bodied Pontiac in 1942 while the Streamline became the B-bodied Pontiac.

Pontiacs now displayed a wider, heavier, lower look. The forward fender line was elongated by the addition of extension caps on the front doors. The cowl was gone when the hood extended back to the front doors. Headlamps were placed further apart and the grille, bumper and hood were widened. Above the vertical side grilles were long horizontal parking lamps. Horizontal bars were found in the horseshoe-shaped center grille while a circular emblem was put in the middle of the upper main surround molding. The Pontiac name was now on the hood side molding of six-cylinder models, while eight-cylinder car moldings said Pontiac Eight. Wartime 'blackout' trim was used after December 15, 1941, and all earlier chrome plated parts were finished in Duco Gun Metal Grey.

Station wagon production went to the new Streamliner line when the C-body Pontiac Custom Torpedo came to an end. Either Hercules Body Company or Ionia Manufacturing did the last of the bodywork.

The Streamliner coupe became the first Pontiac available postwar in September of 1945. The coupe remained the sole product quite some time. In 1946 the Chieftain trim level of '42 was renamed the Deluxe trim level. Pontiacs featured many exclusive styling cues that included wraparound bumpers, concealed safe-light parking lamps, new nameplates and a huge 14 blade grille. Straight back Indian moldings on the rear hood ornament chrome beltline moldings and bright moldings on the 'speedline' fender ribs set apart the Streamliner from other Pontiac models. Other features included larger front fender crown moldings and the fact that Streamliners were typically larger in size. Eights were differentiated by lettering on hood emblems and badges placed forward of the 'speedlines'.

Passenger cars featured gray striped cloth interior trim. Inside the station wagon were three seats in standard trim, two seats in Deluxe trim and featured imitation leather upholstery and passenger car style interior hardware. A standard Six cost around $1,942 while a Deluxe Eight was priced at $2,047. Streamliner station wagons continued to be the priciest of the Pontiac models. In 1946 92,731 Streamliners were sold which accounted for more than two-thirds of Pontiac sales.

With five bands of chrome on the hood, the 'Silver Streak' styling theme continued for 1947. Pontiacs for this year received new grilles with four broad softly bowed horizontal bars. An inverted steer's horn-shaped bar that included a die-cast plate with Indianhead relief protected the hood and fender. On the inside, the sedan and coupes were redesigned with Berwicke beige panels for windows and dashboards. Autumn brown with dado stripe border moldings was the finish of choice for the windshield, door, and garnish moldings. All of the sedans and coupes were fastbacks with full-loop around window moldings. Once again the Deluxe Eight was Pontiacs most expensive model and cost $2,111, while the standard Six tipped the scale at $1,992. More than half of all Pontiacs sold, sales of Streamliner models totaled 128,660 in 1947.

The following year a new styling design was introduced that included triple 'Silver Streaks' which featured round taillights and a horizontal grille theme with vertical shafts. 'Silver Streak' was written on the sides of the hood with eights having an '8' placed between the two words. Once again Streamliners had the distinction of being the largest and most expensive of Pontiac models. All Streamlines now came standard or Deluxe whether 2-door or 4-door fastbacks or station wagons.

Deluxe models featured spear moldings on front fenders, had bright gravel guards and chrome-plated wheel discs on all of the cars except the wagons. On the inside of the Deluxe were flashy two-tone trims with pillow-and-tuft seatbacks, electric glovebox door clocks and quarter sawed mahogany dash and window trim. They also featured Deluxe steering wheels along with other lux appointments. Deluxe wagons featured red upholstery imitation leather seats and the standard Streamliner station wagons featured tan imitation of the same type. The station wagon price started at $2,364 for a standard Six, while the Deluxe Eight, once again Pontiac's priciest models at $2,490. Almost 66% of Pontiac sold for 1948 were Streamliners, a total of 160,857 models.

New for 1948 was the Hydramatic automatic transmission option. Prior to this only General Motors sold vehicles with fully automatic transmissions and the only way to get one was to purchase higher prices Buick, Cadillac or Oldsmobile. Chevy wouldn't introduce Powerglide until 1950, Ford FordoMatic until 1951, and Chrysler, Powerflite on Imperials until 1953. The Hydramatic was a very popular option and around 71% of all Pontiacs were sold with it, a total of 171,946 Pontiacs and 122,327 Streamliners.

The second generation of the Streamliner was introduced in 1949 and lasted until 1951. This newest generation featured low smooth envelope bodies, with the coupes and sedans using the fastback B-body shell. The Streamliner lineup continued to carry the station wagon. All of these models came either as standards or Deluxes. Small hubcaps were found on all station wagons and other standard models. Beltline trim disappeared on standard coupes, sedans, and wagons while gaining painted headlight rims and rubber gravel guards. Deluxe models featured beltline moldings, bright plated headlight doors, and chrome gravel guards.

Once again the Silver Streak appeared in the lineup. It featured lettering that was placed above front fender spears on Deluxes and high on the fenders of standard models. New number '8''s were placed between the two words on Eights. Standard models typically came with gray striped pattern cloth upholstery. The Deluxe usually came with dark gray broadcloth trims. Wagons retained the same trim as before except imitation leather only used on standard wagons. The final year for wood-bodied station wagons was 1949 when production shifted to all-metal wagons with woodgrain trim. Once again Streamliner station wagons were the priciest Pontiac models ranging in price from $2,543 for a standard Six to $2,690 for a Deluxe Eight.

The well-liked 1949 envelope bodies were used again in the 1950 models with updates made to the trim and appointments. /the horizontal center grille bar was now encasing the corners of the body. Deluxe models featured a chrome body strip, chrome wheel rings, stainless steel gravel guards, and chrome headlight rings. Except for station wagons and sedan delivery trucks, the Streamliners had fastback styling. Streamliner station wagons prices fell slightly to $2,264 for standard Sixes and $2,411 for Deluxe Eights. This was because all-metal construction didn't require final work being done at Iona Manufacturing or Hercules Body Company. The Streamliner station wagon continued to be the priciest Pontiac model.

For 1951 Pontiac introduced 'Silver Anniversary' models that commemorated 25 years of advanced engineering. The Silver Streak continued and also the introduction of a wing-shaped grille. Streamliners used the B-body shell again with sloping fastbacks on coupes.
Deluxe models featured bright gravel guards, headlight rings, and a chrome body strip. Deluxe passenger cars, all models except station wagons had beltline moldings that had a dip behind the doors. On Series 25 Sixes a script plate that read Pontiac was used, and on Series 27 Eights it read Pontiac Eight.

The Streamliner station wagon continued to once again be Pontiac's priciest model for its final year. The model ranged in price from $2,740 for a standard Six to $2,629 for a Deluxe Eight. Until 1959 this would be the last time that Pontiac offered a B-bodied car.