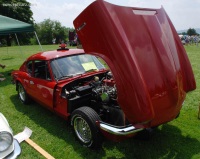 The GT6 MK3 was introduced in November of 1970. Keeping in line with the Spitfire MkIV, the bonnet was flattened out and the tail was also 'chopped off'. No longer protruding, the petrol cap and door handles were adjusted, and the rear roofline of the GT6 was altered. To meet U.S. emission regulations in 1972, the Triumph US specification vehicles updated their carburetor, ignition, piston, distributor and camshaft design. This reduced the vehicle power to 95 bhp.

The following year the GT6 received a facelift that included the addition of new fabric upholstery and new style instruments. The European vehicles received servo-assisted brakes and 'sundym' glass.

The power output was reduced even lower to 79 bhp as the US specification cars emission control was further controlled. This forced the GT6 MK3 to not be as competitive as previously due to the extra cost on the vehicle. The advance rear suspension was converted back to the old swing axle type in an attempt to keep the car comparable with its closest rival, the MGBGT.

Unfortunately, the safety legislation that was enforced by the US market meant a considerable increase in weight, and sales declined steadily. The exhaust emissions badly affected the power of the six-cylinder engine.

The last two GT6s left the factory on November 30, 1973.By Jessica Donaldson