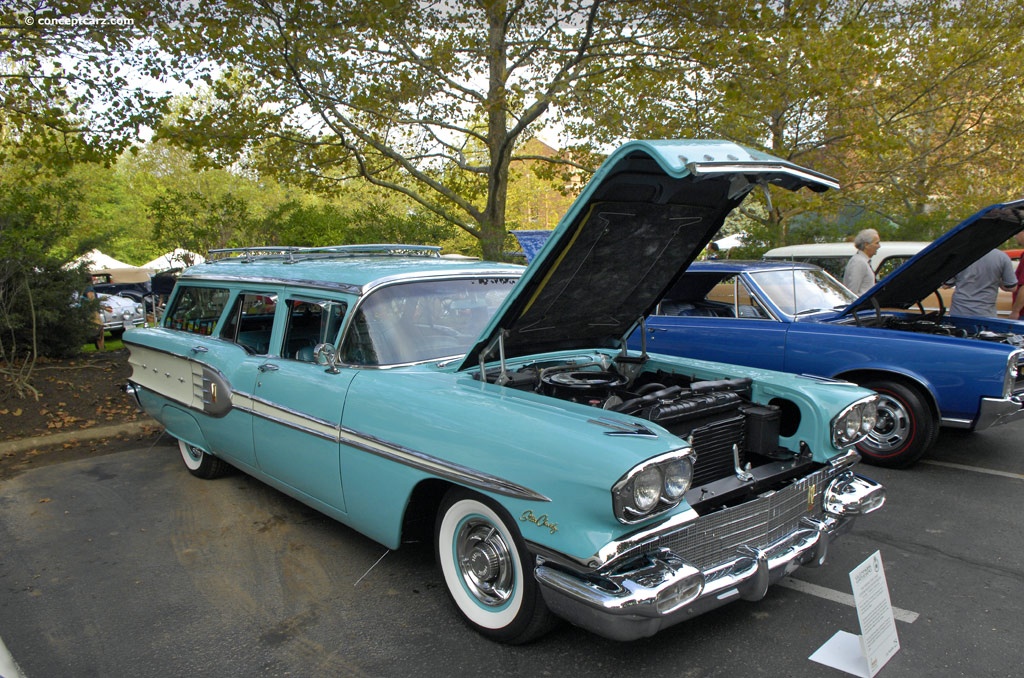 The 1950s styling was highlighted by jet-age styling, towering tail fins, and excessive use of chrome trim. Pontiac models during the immediate post-war era were powered by six- and eight-cylinder engines, with wheelbase sizes of 119- and 122-inches. New bodies and chassis were featured on all 1955 Pontiacs and power was from a 287.2 cubic-inch, overhead valve V8 engine with five main bearings, hydraulic valve lifters, and delivering 173 horsepower. A three-speed synchromesh gearbox with column-mounted gearshift was standard on all models, with a Dual-Range four-speed Hydra-Matic being optional. Wheelbase sizes were 122- and 124-inches.

Like much of the automotive industry, Pontiac sales increased during the early 1950s, then fell sharply due to the economic recession of 1958, with several companies eventually succumbing to the financial pressure and ceasing production forever. Among the list of defeated companies included Packard, Continental, Imperial, and DeSoto. Ford introduced the new Edsel marque in 1956, but due to the difficult economical era and styling that never gained favor with the public, its lifespan was brief, ending in 1959.

Within the General Motors hierarchy, Pontiac rested above Chevrolet, but below Oldsmobile, Buick, and Cadillac. The 1958 Pontiacs occupied the mid-to-high $2,000 range, with the Chieftain serving as the entry-level model and the Star Chief at the other end of the spectrum, highlighted by the exclusive Bonneville Convertible. The Bonneville became its own model designation in 1958.

The Chieftain was powered by a two-barrel, 347 CID OHV V8 with 227 horsepower. The Custom Safari, Super Chief, and Star Chief used a four-barrel barrel version of the 347 CID V8 rated at 244 horsepower. The Bonneville used a Rochester mechanical fuel injection system on the 347 CID and produced approximately 315 horsepower.

New styling and chassis improvements were applied to the 1958 Pontiacs. In the front was a honeycomb grille, with a smaller bumper and surround, quad headlamps, recessed floors, concave rear fender panels, and a silhouette that was longer and lower. The Chieftain and Bonneville had a 122-inch wheelbase while the other models used a 124-inch wheelbase platform (the four-door Custom Safari wagon rested on the shorter Chieftain platform). The Chieftain and Bonneville had a length of 211.7-inches, the Super Chief at 210.5-inches, Star Chief Super Deluxe measured 213-inches.

Among the Star Chief line, the four-door Catalina Hardtop was the most popular, with 21,455 examples sold. 13,888 of the two-door Catalina and 10,547 of the custom sedan were built. The Custom Safari wagon was expensive and exclusive, with 2,905 examples built, accounting for the lowest production figures within the 1958 Pontiac line. The two-door, 9-passenger Chieftain had 5,417 sales, the convertible Bonneville had 3,096 sales, and the Sport Coupe version had 9,144 sales. The total Star Chief line of all combined body styles accounted for approximately 23-percent of Pontiac's total 1958 production.
by Daniel Vaughan | Jan 2021

The Star Chief line was produced between 1954 and 1966. A Star Chief made it to the big screen, enjoying a brief cinematic debut on the 100th episode of I Love Lucy, when the entire gang drove out to California. Production ran from 1954 to 1966 and was a luxurious convertible that served as Pontiacs premium model. The model could easily be identified by its chrome star trim along the sides.....
Continue Reading >>

Dollar for dollar, you cant beat a Pontiac was the advertising jingle that represented Pontiacs steadfast reputation for reliability and quality in the 1950s. Produced by General Motors Pontiac division, the Star Chief was a prestigious top of the line model introduced in 1954 through 1966. Before the introduction of the new premiere model, all Pontiacs rode on the modest Chevrolet wheelbase.....
Continue Reading >>

The four 'Super Deluxe' level Pontiac Star Chief designs were the 'something really special' cars for Pontiac in 1958, including this Custom Safari Station Wagon.....[continue reading]