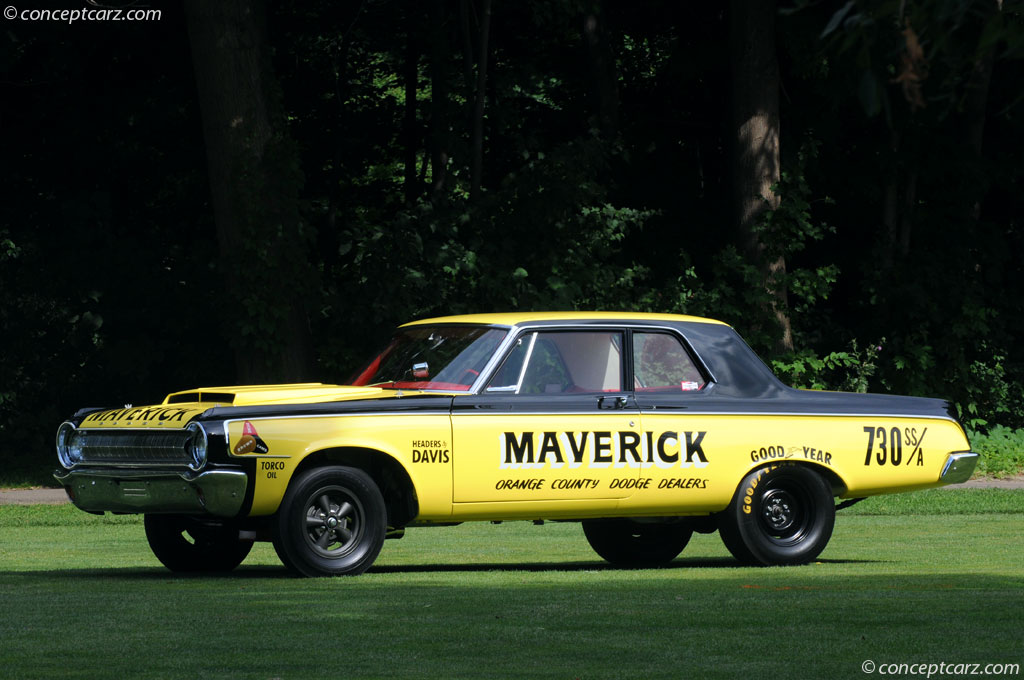 The Dodge 330 Series shared its 119-inch wheelbase with the 440 and Polara, and when powered by the 426 cubic-inch Ram-Charger Max Wedge V8 it was nearly unstoppable on the drag strip. The 330 was the base trim level Dodge for 1964 (the Dart was the base compact Dodge) with prices that range from $2,260 and $2,860. Although 1965 models have often been credited with the first use of the 'funny car' title, the 1964 Dodge was the forerunner to that ideal. The 426 Hemi-powered Dodges outclassed the competition at Dayton in February, and the factory had plans to release the engine for drag racing as well. The Hemi packages of 1964 are often referred to by its engine code of A864, which denoted the cross-ram-equipped race Hemi drag engine. The 1964 Hemi package had an aluminum intake, offset dual Holley carburetors, 12.5:1 compression, and chrome valve covers. The exhaust system used factory cutouts, one transverse-mounted muffler, and a single exhaust exit. Building on previous packages, the Hemi models used light aluminum components wherever possible including the fenders, hood, scoop, front bumper, and doors. The battery was moved to the trunk and the rear seat was deleted. The engines were backed by the A727 TorqueFlite transmission operated by pushbuttons in the dash. Interiors included factory lightweight A100 bucket seats with lightweight brackets, red carpeting, and radio- and heater-delete plates. The side windows were made from thin plastic and the rear window was from lightweight Plexiglas. Magnesium wheels were at the front.

Although the Ramcharger did well on dragstrips, it was less successful in NASCAR competition. To make it more competitive, Chrysler re-introduced the hemispherical segment heads for the Ramcharger resulting in the 'Hemi-Charger' built solely for competition use in Dodge and Plymouths. It quickly became the engine to beat, conservatively rated at 410 hp with a four-barrel. A pair of Dodge 330 two-door sedans with supercharged Hemi engines, known as the Dodge Chargers, performed exhibition runs during the summer of 1964, achieving a standard start quarter-mile speed of around 135 mph.
by Daniel Vaughan | Dec 2020

In the 1960s, the auto companies used race cars, both NASCAR and NHRA, to promote sales. They would build and give promotional cars to drivers and hope that if they won on Sunday, they could sell on Monday.....[continue reading]

This Dodge 'Color Me Gone' Model 330 was tuned by Dick Branster and driven by Roger Lindamood. It is one of the most famous of the limited-edition, lightweight Dodge and Plymouth drag cars, with tens of thousands of plastic model kits of this car sol....[continue reading]

The Ramchargers Race Team out of Detroit, Michigan needs no introduction. The Ramchargers were one of the first ventures of the automotive industry into organized racing. The racing legacy developed by this team was legendary. In 1959 a group of engi....[continue reading] 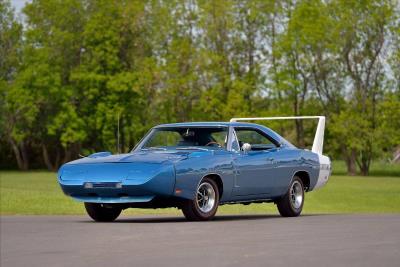 Mecum Dallas - 1,000 Muscle Cars And Classics Up For Auction And 'Bullitt' For Preview 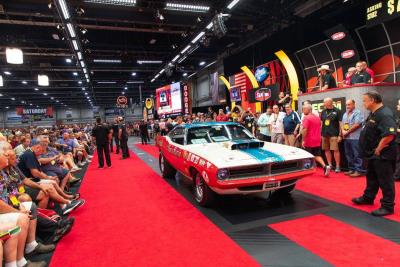