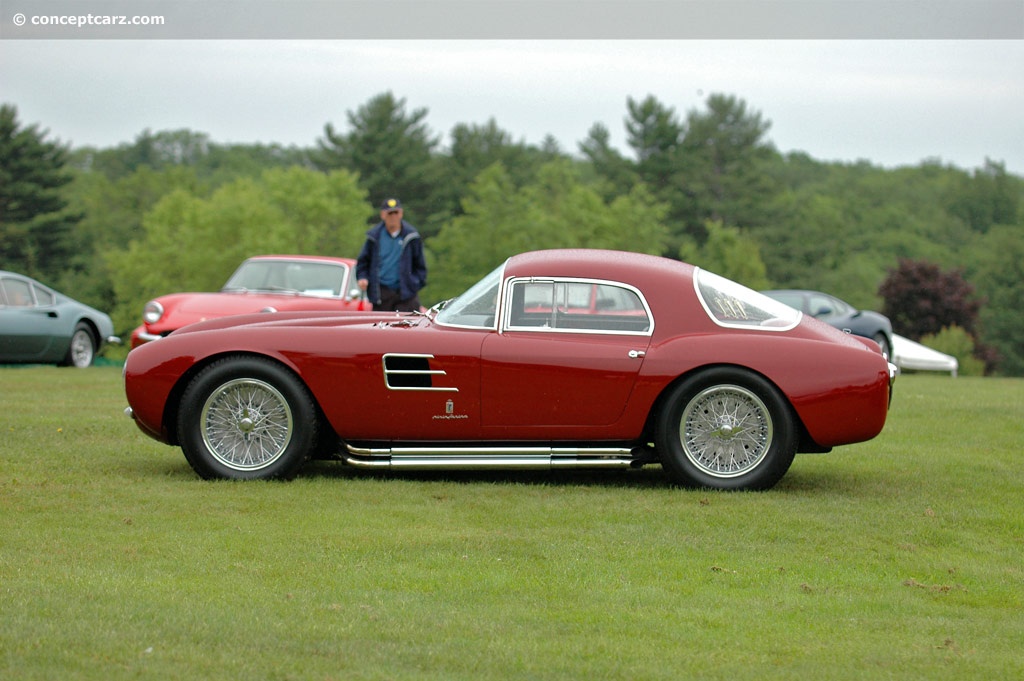 The Maserati Tipo A6GCS Series II included six specially bodied cars. Four were coupes created by Pininfarina. One was a spyder created by Vignale and the other was also a spyder, created by Frua.

Chassis number 2049 was a Vignale Spyder and constructed in 1953. It was reboided by Scaglietti in 1955, also in Spyder configuration.

Chassis number 2054 was a Frua Spyder built in 1953. There is little information on this vehicle, other than the where-abouts of the chassis is unknown. The body, however, was transplanted on a Triumph chassis. It was offered for sale in 1999.

Chassis number 2057 was constructed in 1954 and was on display at the Turin show, finished in two-tone blue colors. It was rebodied as a spyder in 1955 and was issued a new chassis number at the time, #2086. The body was acquired by Franco Lombardi in 1977 who had the car restored on chassis number 2070.

Chassis number 2059 was shown at the Paris Salon in 1954 where it was finished in red with white stripes. It was later painted white shortly after the show and given an A6GCM engine. It passed through a few owners and was shown at the Pebble Beach Concours in 1999 in unrestored condition. Since that time, it has undergone a complete restoration and is in the possession of Erich Traber.

The final vehicle, chassis number 2060 was constructed in 1954 and was painted red with a blue stripe. Fiandri later converted the car to a spyder configuration. The original body was used for chassis number 2089 and is currently owned by Boris Subbotin.
by Daniel Vaughan | Jan 2007

The Maserati A6G2000 was produced from 1954 through 1957 with around 60 examples being created, many receiving custom bodywork from prestigious coachbuilders such as Zagato, Pinin Farina, Vignale, and others. Even though the company was not in financial difficulty, the Maserati brothers sold their shares of the company to the Orsi family from Modena in 1937. The headquarters were moved from Bologna....
Continue Reading >>

With a spyder body by Fantuzzi, number 2089 was a private entry in both the 1955 and 1956 Mille Miglia races, finishing 1st in Class (4th overall) and 2nd in Class (56th overall) respectively. Owned and driven by Francesco Giardini, it also competed....[continue reading]