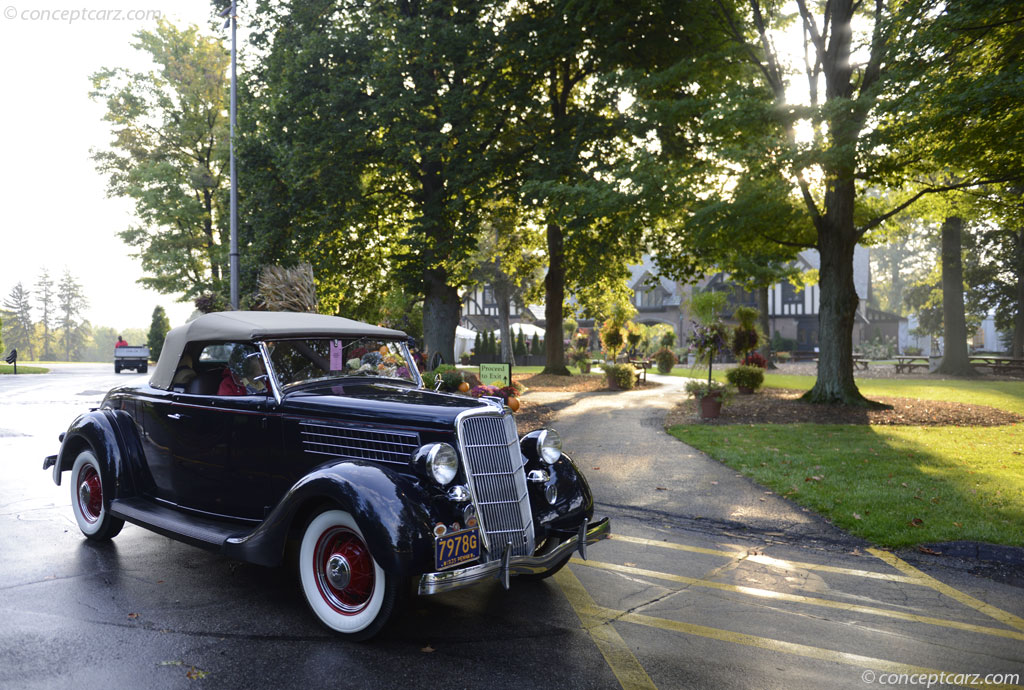 By 1935, the world was still suffering from the effects of the Great Depression but things were starting to improve. Ford used the slogan 'Greater Beauty, Greater Comfort, and Greater Safety' to describe its 1935 product. Ford continued to thrive on mass production of automobiles sold at modest prices to the largest possible low-priced market.

Ford moved the engine forward eight inches for the 1935 model year, increasing the size of the passenger compartment and re-located the rear passenger seat in front of the rear axle without lengthening the wheelbase. It was a noticeable improvement and described by Ford as 'Center-Poise Ride.'

The hood was noticeably shorter, even with the radiator grille moved to a position where it was nearly even with the front of the fenders. The shorter hood gave the 1935 Ford a more aggressive and pugnacious appearance, which Ford designer Bob Gregorie did not like. Nevertheless, the sporty appearance was more Intune with the sprightly performance that the flathead V-8 offered.

The 221 cubic-inch, L-head V8 developed 85 horsepower and was backed by a three-speed manual transmission. The wheelbase measured 112-inchs with a length of 182.75. Total 1935 production reached 820,253 Ford vehicles with Model 48 prices ranging from $505 to $755. Most of the vehicles were the Standard Tudor bodystyle which sold for $505, and found 237,833 willing buyers. 78,477 examples of the Standard Coupe were sold and 31,513 of the three-window Deluxe Coupe. The Deluxe Fordor Sedan, selling for $660, was also very popular with 105,157 buyers sold. The top-of-the-line Deluxe Convertible Sedan and the Station Wagon had the highest prices and the least amount of sales, with fewer than 5,000 examples each.

The vast majority of automobiles built in the United States by this point in history had closed two and four-door bodies, but open cars were still popular, catering to the specialized desires of a wealthy group of loyal Ford V-8 owners. The new Convertible Sedans resulted in many prospective clients who were seeking the allure of an open car that was also weather-tight. The convertible sedan accomplished this with roll-up windows in all four-doors and removable pillars between the front and rear doors. The pillars, containing the window channels, were secured to the soft-top frame and the doorports. They had 'tight fits' with the side windows and much reduced noise than the standard convertible. Offered only in deluxe trim, the new Convertible Sedan was stylish, affordable, exclusive, and versatile.

The Triple A's Depression era classifications, which included the Indianapolis 500 race, favored stock-based engines. Ford had abandoned direct participation in competition with its stock cars following the 1933 Elgin Road Race and a few subsequent road races on the West Coast. Privateers continued to employee the V-8 as the basis for Indianapolis entries; for 1934, Charlie Crawford's 16th place being the best result. Preston Tucker brought a proposal to Ford near the end of 1934 to build and race a team of ten Ford V-8 powered specials in the 1935 edition of the Indy 500. The work was performed by Harry Miller with backing was provided by Ford's advertising agency, N.W. Ayer, and Ford dealers' cooperative advertising budget.

After the contract was signed in March of 1935, construction began on March 12th, just two-and-a-half-months prior to the start of the Indy 500 on Memorial Day. The cars built by Miller, known as the Miller-Fords, were front-wheel-drive with low, aerodynamic bodies with complex and compact parallel link four-wheel independent suspension. Four examples qualified for the race but had a shortened day due to limited testing and development. The main Achilles heel were the planetary gear steering boxes mounted to the V-8s' exhaust manifolds which boiled off their lubricant and seized.
by Daniel Vaughan | Apr 2020
Vehicle Profiles

A redesign to the Ford V8 in 1935 moved the engine forward eight inches and increased the size of the passenger compartment. The radiator grille was now even with the front fenders and the hood decreased in length. Ford dubbed this redesign the 'Ce....[continue reading]

There are times when a practical invention, or application, becomes a sought after and exotic source of identification. A practical example of this could be the H1 Hummer. It was a practical war-machine that became a much sought-after and luxu....[continue reading]

The current owner is the third owner of the car. Ford produced 6,073 units in 1935. This car's selling price was $580. It is equipped with a 221 cubic-inch flat-head V8 engine generating 85 horsepower. It has a three-speed transmission with a Col....[continue reading]

Henry Ford founded the Ford Motor Company in 1903 and is credited with introducing the assembly line to the auto industry. His Model T, introduced as 1909 model, literally put the world on wheels. Thanks to the top-selling Model T, and its equally ....[continue reading]

This 1935 Ford Model 48 Three-Window Deluxe Coupe was offered for sale at the 2007 Worldwide Group Auction held at Hilton Head Island, SC where it was estimated to sell for $40,000 - $60,000. The car is powered by a Ford flathead V8 engine that disp....[continue reading]

Ford used the slogan 'Greater Beauty, Greater Comfort, and Greater Safety' to help entice those dwindling buyers in America who could still afford a car during the difficult era of the Great Depression. The 1935 had updated styling with more curves ....[continue reading]

This 1935 Ford Four-Door Trunk Back Sedan is painted in Washington Blue with a Grey Ripcord interior. It has a rear mounted spare, crank-out windshield, white wall tires, dual horns, wipers, and a banjo steering wheel.....[continue reading]

In the mid-thirties automotive sales were dwindling. Cars had to be updated each year if a company was to survive. Ford had inaugurated a two-year design cycle in 1933 but their 1935 models received fresh new styling and a newly designed chassis. The....[continue reading]

This vehicle is a 1935 Ford Deluxe 3 Window Coupe that has its correct Ford flathead V8 engine and three-speed manual gearbox. It is painted in Dearborn blue with an all original Grey Mohair interior. It is equipped with wide whitewalls, chrome tri....[continue reading]

Phil Wright, a Briggs designer whose resume included work with the Pierce Silver Arrow, aided in providing some of the attractive new styling for the 1935 Ford. Ford offered ten body styles in Deluxe trim, including a new convertible sedan and 'Tudo....[continue reading]

1935 was a hallmark year for Ford as it was the first time that they outsold their competitor, Chevrolet, since the end of Model A production in 1930. Interior space was increased by using a boxed side-rail frame and increasing the distance between ....[continue reading]

Ford 1935, Ford automobiles had a lower and more streamlined appearance, thanks in part, to a narrower radiator grille, more rounded fenders and a more sloped front windshield.....[continue reading]

The redesigned Ford model line for 1953 helped the company to outsell Chevrolet for the first tim since 1930. This Tudor Sedan was originally sold in the Midwestern part of the United States. A short time after acquiring the car, the owner passed awa....[continue reading]

This 1935 Ford Woodie originally came from the New England area. It was purchased in 1977 by the current owner's brother prior to any restoration work. The complete professional body-off restoration was finally finished in 1979 in Hanover, Massachuse....[continue reading]

This car was restored and prepared for the inaugural coast-to-coast Great Race from Los Angeles to New York in 1985. Navigator Vic Thompson and Rex Gardner made a real effort to build the car as 'bullet-proof' as possible.....[continue reading]

Ford was America's best-selling automobile in 1935. During that year, the company produced its two millionth V-8 engine. And a Ford convertible sedan served as the pace car at the 1935 Indianapolis 500 race.....[continue reading]

Ford's renowned engineering brought about the introduction of a V-8 in 1932 for its all-new 1932 models, offering the horsepower and prestige of more expensive cars at the price of the competing six-cylinder cars. The Model 48 line for 1935 was sligh....[continue reading]